Inside the Great Kindrochit, one of the most difficult (and delightful) endurance challenges ever designed

To the loch and Munros we go.
Nigel Roddis/SimpleImages
By Tanner Garrity @tannergarrity

It was 1998 and David Fox-Pitt was sitting on his doorstep, drinking a tea, trying to figure out a new way to entertain his old friends. It would be nearly 20 years before the Queen awarded him his MBE medal — for contributions to “the adventure challenge industry and to charity” — but he’d already developed a knack for finessing his way through outsized situations in the great outdoors.

In his younger days, Fox-Pitt hitchhiked from Paris to Athens with just £40, completed Parachute Regiment training (even participating in Exercise Lionheart, a Cold War-era mobilization that remains Britain’s largest since World War II) and traveled extensively throughout Australasia. At age 23, he worked as a tractor driver for months in a remote town six hours north of Perth. Before returning home to Scotland, he took a backpacking side quest to New Zealand, which went horribly awry: he was stranded on the rim of a volcano as a blizzard blew in from Antarctica.

Fox-Pitt was supposed to make it back in time for his sister’s wedding, but now feared his family would have to arrange for his funeral. He managed to find a sliver of shelter under a rock, and holed up in a sleeping bag for 18 straight hours, what he calls “the longest night of my life.” He made it through, and left with a bit of an epiphany — a desire to live a life in service to others by spearheading trips into the unknown. His brush with death hadn’t tempered his fervor for adventure. In fact, it had shown him what he was capable of.

In his book Positiverosity, Fox-Pitt summarizes this ethos: “One of my earliest international adventure challenges was the Hannibal Challenge. For three consecutive years, I organised groups to walk for two days in the footsteps of Hannibal (without elephants). The route was from Guillestre in France through the Queras National Park and over the Alps via Pass de la Traversette, into Italy and the source of the Po River…What joins all these adventures together is my ethos of making personal challenge life-affirming, whilst helping others along the way. What better purpose than that of philanthropy!”

Of his now-many contributions to the endurance realm, though, Fox-Pitt’s greatest is the little-known “quadrathlon.” He and his wife, Joanna, thought they’d invented the four-pronged challenge when they hosted the very first Great Kindrochit Quadrathlon in the late ’90s. They hadn’t. A man named “Prince” Sergio Ferrero had held the first race on the island of Ibiza a decade before, and the European Quadrathlon Federation had actually been formed a year before. But the Scottish Highlands, backyard to the Fox-Pitts (who at that point had officially launched WildFox Events), offered perhaps the most perfect location for the fledgling sport.

I asked a few friends, in advance of this piece, what they thought the fourth sport was in a quadrathlon. (Running, biking and swimming being the obvious inclusions.) The only clue I offered was that a prominent iteration of the race took place in Scotland. No one knew the answer. Some gave some startlingly offbeat replies. It isn’t cheese-rolling.

It’s kayaking. Scotland has over 30,000 lochs. That’s nearly 17,000 more than you’d find in lake-happy Minnesota. Its preponderance of fresh water is one reason the United Kingdom has led the way on the “wild swimming” charge in recent years. Leave it to the British, too — 17% of the country’s population reportedly has a Strava account — to find a way to shoehorn another concentration into the triathlon, already a notoriously difficult endurance challenge. 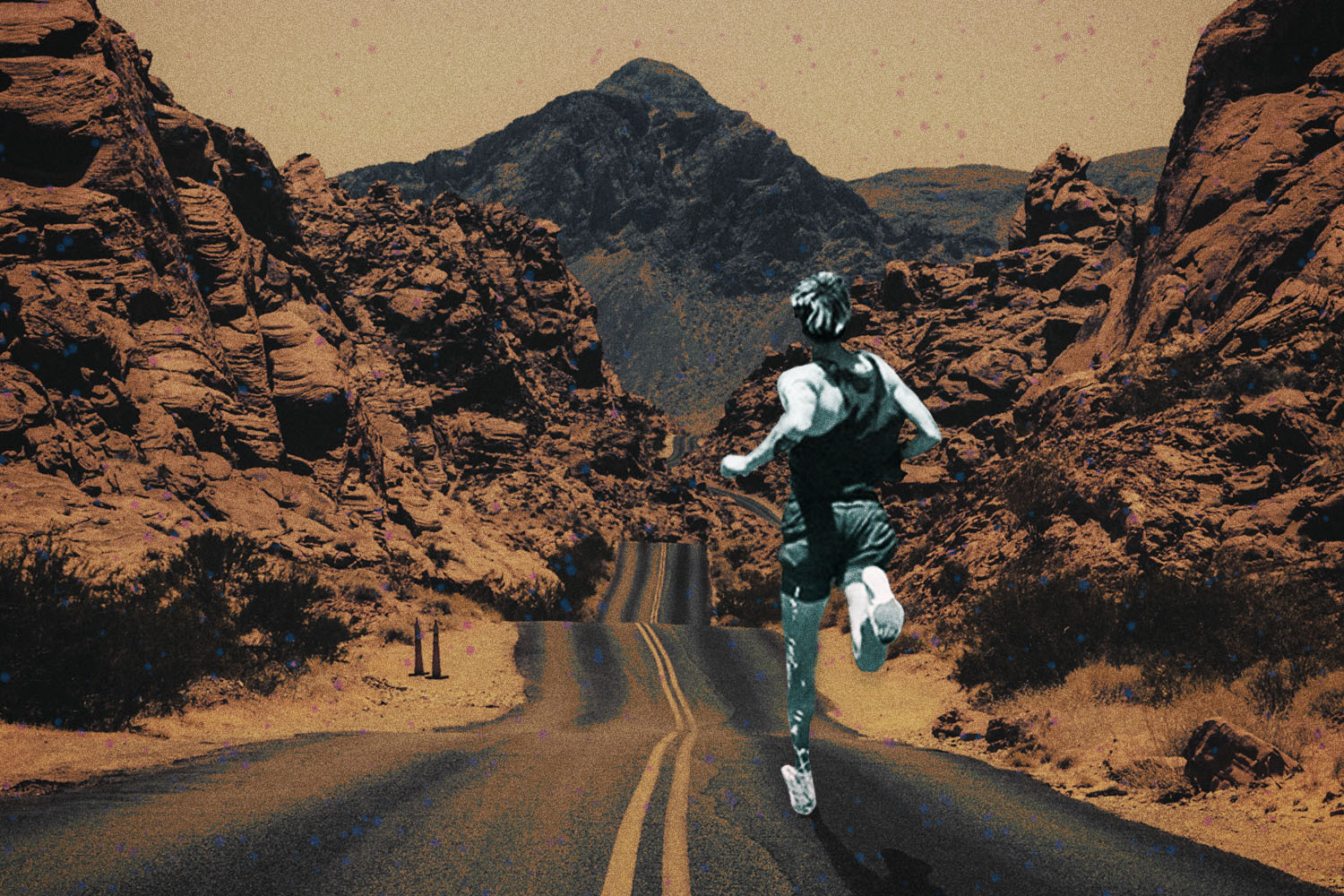 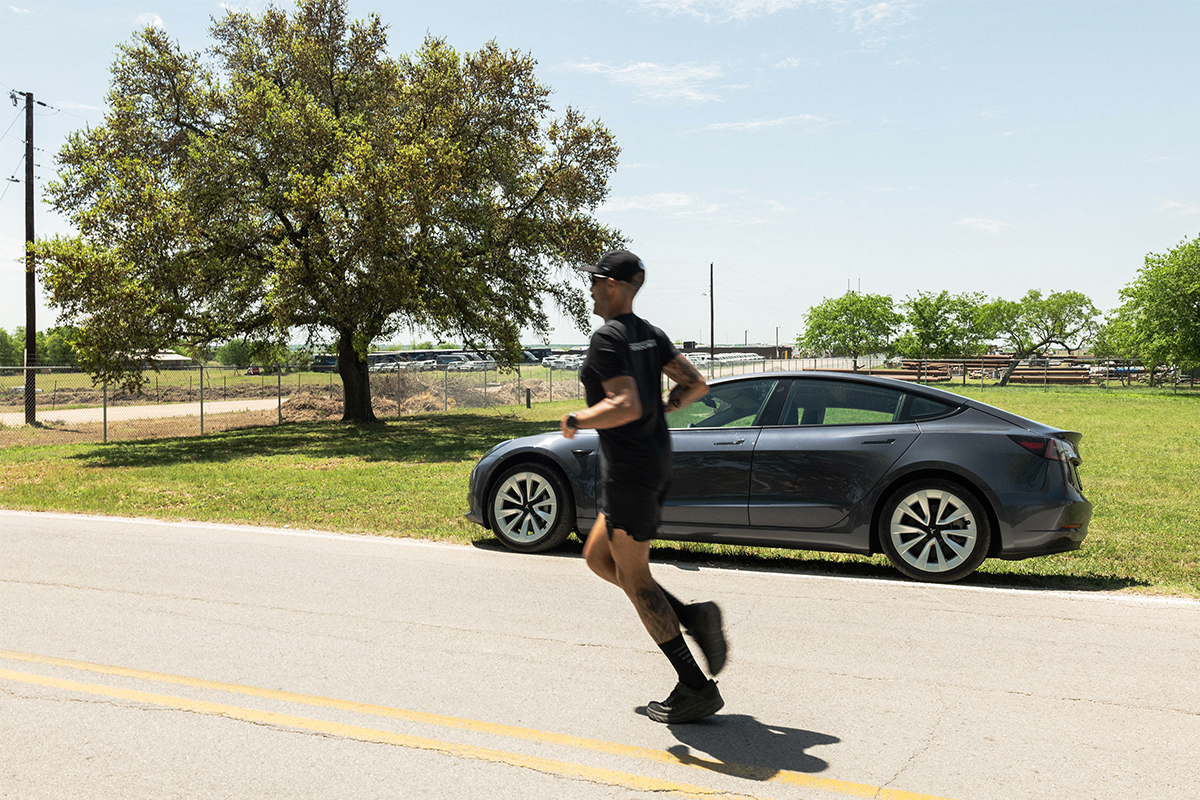 Down Goes Musk: How an Ultrarunner Outlasted a Tesla Model 3 in a Crazy, 75-Hour Race

There will be four officially sanctioned World Quadrathlon Federation events in England this year. Germany and the Czech Republic have a handful each, too. The WQF, obscure governing body it may be, has its own constitution, and set rules on varying distances within the discipline: there’s the sprint distance (0.5-mile swim, 12.4-mile bike, 2.5-mile kayak, 3.1-mile run), the middle distance (0.9-mile swim, 24.9-mile swim, 5-mile kayak, 6.2-mile run) and the long distance (2.5-mile swim, 55.9-mile bike, 12.4-mile kayak, 13-mile run). Inevitably, this world has its hungry apostles, who relish the requisite mix of upper-body and lower-body strength, heart health and lung capacity. Many competitors own K1 racing boats.

But there is a self-awareness to the sport, too. The WQF concedes that many of its sign-ups are triathletes who show up two hours before the race starts, in order to make sure they know how to pilot a kayak in a straight line. And like any niche organization trying to pull off expensive events, it really wants prospective participants to feel welcome. On its FAQ page, the group emphasizes that “90% of the field are there to enjoy the race.” That same sensibility propels Fox-Pitt’s Great Kindrochit which, at its core, is a family affair. “It’s our home!” Joanna Fox-Pitt says of their flagship event on Loch Tay.

“The event is small, friendly and slightly eccentric in a very British way,” she says. “David designed a number of fun feed stations throughout the race. Fish and chip stops, haggis stops. There are also bagpipers, a checkpoint with non-alcoholic cocktails and volunteers in grass skirts on ‘bikini’ beach. At the end, you cut a watermelon in half with a sword to stop the clock. We then have an afterparty with a ceilidh band and fireworks. Everything’s meant to be fun and friendly. You aren’t a number, you’re a friend.” 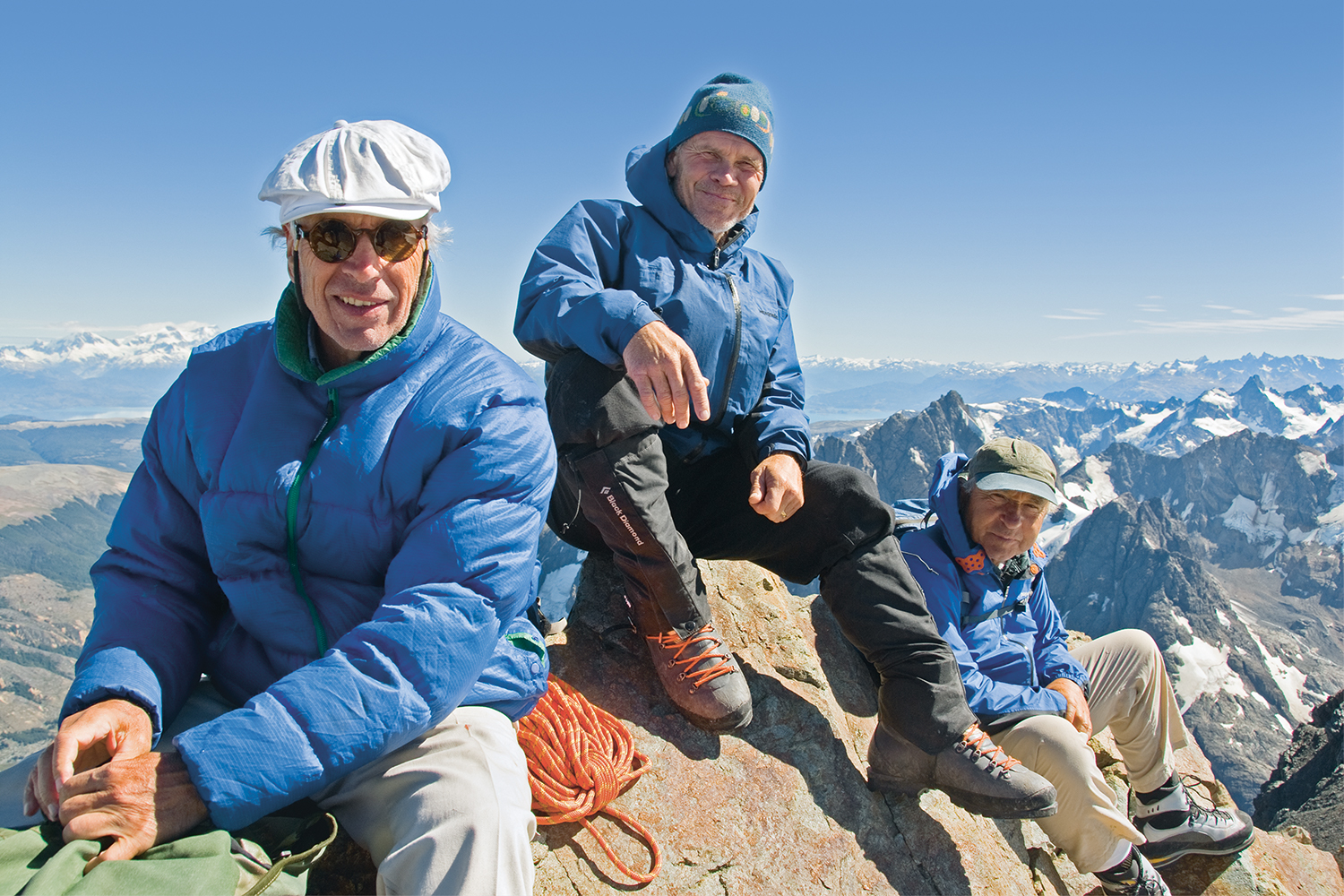 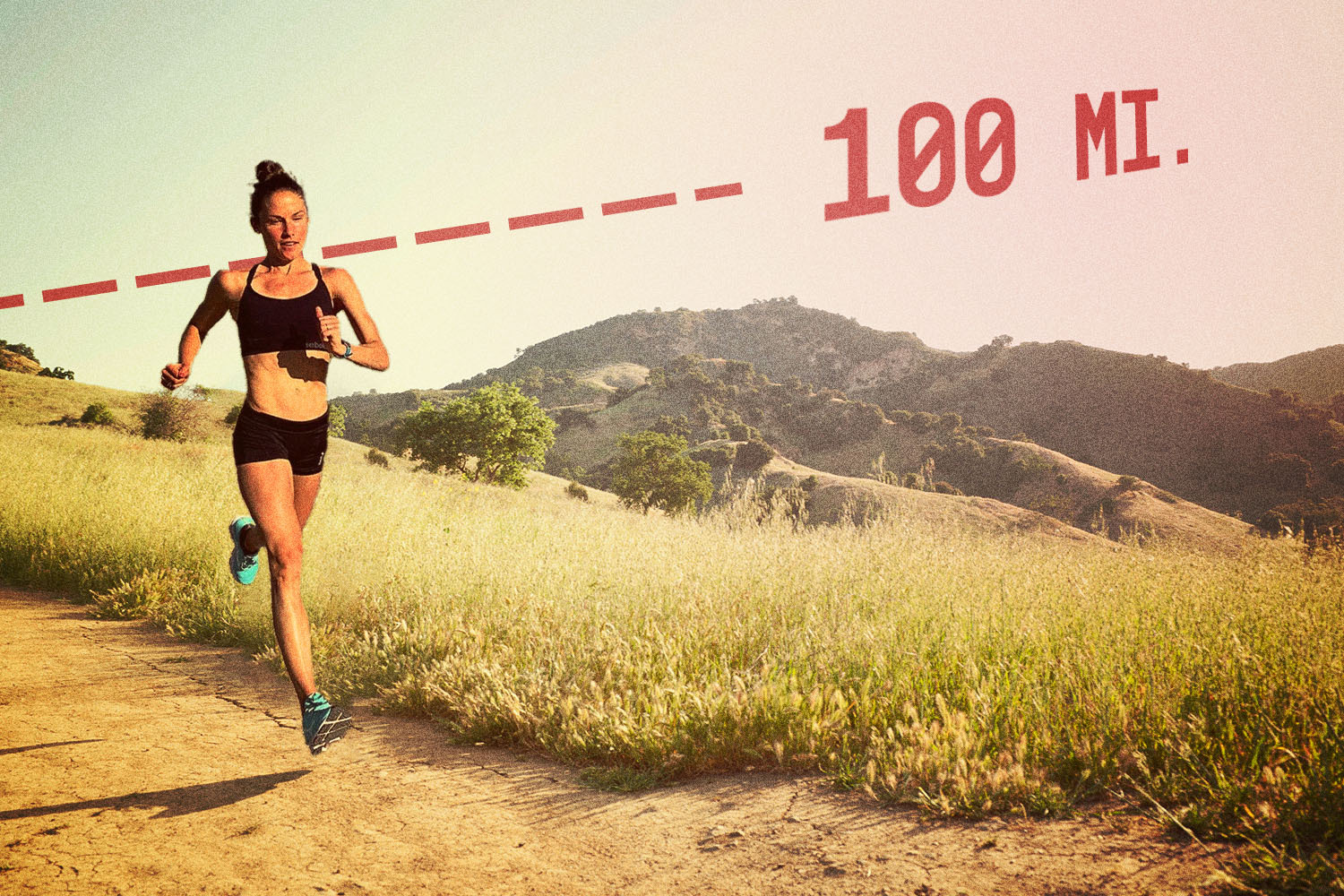 “The Quad” has one key rule: participants are expected to swim, run, kayak and bike in teams of two. On one hand, that’s another example of the event’s easygoing atmosphere. Triathletes may elbow each other on their way to the finish line; these quadrathletes are more likely to pass it arm in arm. But the need for a buddy system also speaks to the Great Kindrochit’s difficulty. At its most ruthless, the race is actually a battle against Scotland. Having an extra friend in that fight is essential.

“We’re pretty sure this is Scotland’s toughest one-day event,” Joanna says. “People who’ve done really tough events like the Hawaiian Iron Man vouch for this…When we first designed it, many said it was a crazy expectation to think that people would be willing and able to achieve all this in one day.”

“They were wrong,” Joanna says, but only about the 24-hour part. Completing The Quad in any span of time is still an objectively “crazy” endeavor. The race’s “Gold Route,” the toughest of three options, includes a 0.8-mile swim, 15-mile run, 7-mile kayak and 34-mile bike. Duos start either at 6 or 7 a.m., depending on personal preference. While neophytes generally worry about the unfamiliar kayaking portion — David and Joanna offer competitors the opportunity to borrow kayaks months ahead of time (they once received a photo of a couple training under London’s Tower Bridge), and urge them to try progressive training routines on rowing machines — the race’s calling card takes place outside of the lake, trekking up and down the region’s iconic Munros.

“Without a doubt, the hills section is the most challenging,” Joanna confirms. “Making your way through the Scottish hills, especially if the cloud comes down, is as hard as it gets.” Scottish mountains above 3,000 feet in elevation are considered “Munros,” in reference to Sir Hugh T. Munro, a British mountaineer who helped found the Scottish Mountaineering Club in the late 1800s. Munro discovered that there were 10 times as many mountains exceeding the 3,000-foot marker than previously believed, and devoted his life to summiting them all. Of his original list, he failed to climb exactly one: Carn Cloich-mhuilinn in the Cairngorms, Scotland’s second national park. He was saving it for last, but died before he could attempt the ascent.

Munro bagging is now a popular Scottish pastime, and 6,000 “compleatists” (they use the archaic spelling) have managed the country’s full list of 282. The Quad contains seven of the bunch: Meall Greigh, Meall Garbh, An Stuc, Ben Lawers, Beinn Ghlas, Meall Corranaich and Meall Nan Tarmachan. Even harder than spelling and pronouncing them is making it through them in one piece. There’s a reason WildFox pitches this portion more as a “run/walk.” Like some ultrarunning events in the American West, it simply isn’t economical to run up some some of the rockiest and steepest hill faces. Besides, half the battle is navigation. There aren’t cones or beacons up there; it’s up to each team to pace themselves, anticipate angry turns in weather and blaze the literal path of least resistance.

What emerges is a contradictory, love-hate relationship with the challenge itself. Veterans of endurance pursuits know this feeling well. It’s why marathoners who say “never again” during their celebratory pint find themselves training again 10 months later. No matter how bad the climb is, you can’t beat the view. And what a view it is. Over 2,000 years ago, Loch Tay, one of Scotland’s deepest lakes, was home to 20 different artificial islands — manmade wooden structures known as crannogs. As late as May there is still a dusting of snow on the peaks in the Ben Lawers range. I was there years ago. I remember waking up, drinking a tea, watching the hills and the lake, feeling inspired.

Philanthropy is still at the very center of David Fox-Pitt’s mission. The kid who once traveled Europe with just £40 in his pocket has now raised £40 million for causes throughout the globe. The Quad specifically supports Mary’s Meals, a registered charity founded in Scotland, which works to feed malnourished children in impoverished communities. (You can learn more about the program here.) This year, in between keeping the Great Kindrochit plugging right on along with Joanna, David has been on the Ukraine-Poland border, providing emergency provisions, pizza and ice cream to displaced refugees. Why? Because they aren’t numbers. They’re friends.