Williamson was injured on national TV as the Blue Devils were blown out 88-72 UNC.

Thirty seconds into the most-hyped NCAA basketball game of the season, the top player in the nation and presumed No. 1 NBA draft pick went down in a heap after his shoe shredded like wet tissue paper.

Following the shoe – a Nike PG 2.5 PE – failure, Zion Williamson left the game with a knee injury and the top-ranked Duke Blue Devils went on to get crushed 88-72 by the No. 9 UNC Tar Heels.

Barack Obama was watching the game courtside and was clearly caught on camera saying “his shoe broke” after Williamson went down.

Williamson only suffered “a mild knee sprain” but Nike took a severe beating on social media as viewers and fans started going after the company.

“For a shoe to fall apart – completely fall apart – came in one of the most highly anticipated games in a long time,” sports executive Sonny Vaccaro told USA TODAY Sports. “This magnifies it. There was no NBA game going on and Zion had as much hype as anyone in a while. Tickets were going for thousands of dollars. The moon and the stars aligned and everyone in the world saw it.”

Following the primetime injury, Nike almost immediately issued a statement. “We are obviously concerned and want to wish Zion a speedy recovery,” the company told Darren Rovell of The Action Network. “The quality and performance of our products are of utmost importance. While this is an isolated occurrence, we are working to identify the issue.” 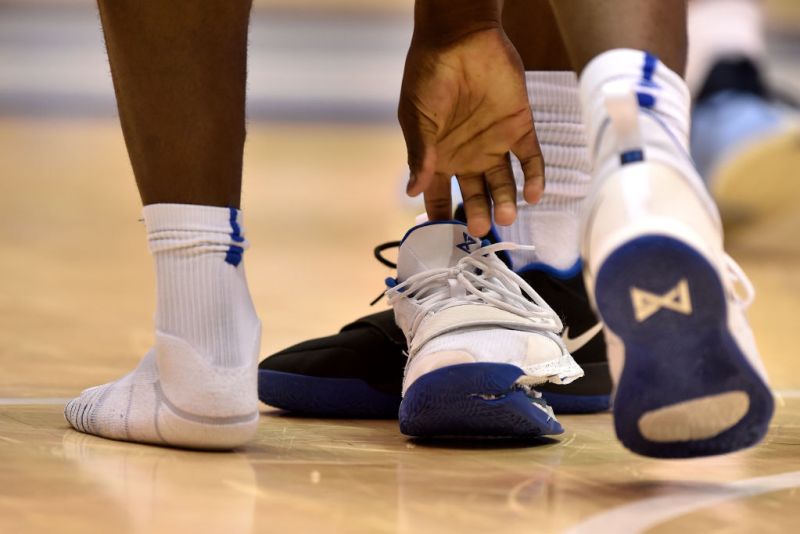 DURHAM, NC – FEBRUARY 20: Zion Williamson #1 of the Duke Blue Devils picks up his broken shoe in the first half against the North Carolina Tar Heels at Cameron Indoor Stadium on February 20, 2019 in Durham, North Carolina. (Photo by Lance King/Getty Images)
Getty Images

In addition to taking a hit on social media, Nike may also take a hit in the wallet.

Early on Thursday morning, Nike stock was down 2% in premarket.