From the mosh pit to Pitti Uomo 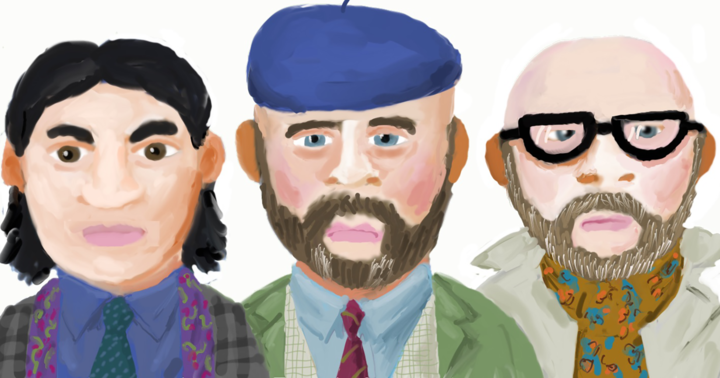 Toronto Hardcore punk band Fucked Up had just finished their set at the Music Hall of Williamsburg and I was rubbing the spot on my head that a teenage girl had used as a launching pad for her stage dive during the encore. Damian Abraham, the band’s lead singer, in keeping with the noble hardcore tradition of maintaining as little separation between the audience and the band as possible, was giving out hugs. As he took me in his sweaty, shirtless embrace, he told me, “I saw you singing along in the pit, all dressed up.”

For the record, I was wearing a rather unassuming plain black suit and a Fred Perry polo shirt. And yet, compared to the T-shirted masses with whom I’d just shared a slam-dancing catharsis, I might as well have been Fred Astaire.

Hardcore — punk rock at its most stripped down and raw — isn’t chiefly known for its contributions to fashion, but the more I thought about it, the more people I could think of in the somewhat rarefied world of luxury menswear who originally came crawling out of basement shows and circle pits.

“It is very funny,” Tony Madsen-Sylvester, English lead singer of Norwegian deathpunk band Turbonegro and erstwhile menswear style icon — lauded on menswear blogs for his deft combinations of workwear, sportswear, military and tailored clothing — tells InsideHook, “when you scratch the surface of menswear and find out how many people were hardcore kids. They have something that you can’t find on a forum or isn’t straight up lifted from somewhere else but goes through a filter of their own experience.”

He’s not wrong — one of the more welcome if disorienting experiences at menswear trade shows like Pitti Uomo in Florence is the constant discovery that the guy in a fedora drinking a Negroni at the next table used to listen to bands like the Cro-Mags and Murphy’s Law, too.

“I still identify myself as a hardcore kid,” says Benjamin Philips, the Assistant Manager at Drake’s on Clifford Street in London, “even though I’m a 40 year-old guy who works in a luxury menswear store.”

Philips is a large chap (and the former lead singer of hardcore band) who cuts a striking figure in a seersucker suit and knit tie, tattoos spilling out over his collar and creeping down his hands from under his shirt cuffs.

“I’m lucky at Drake’s,” he explains, “because so much of what we do is about pattern: ties, scarves, pocket squares. So I think a lot of our customers see my tattoos and for them it’s an extension of that pattern.”

So why is it that so many former punks and hardcore kids have found their way from screen-printed t-shirts to vegetable-dyed silk madder ties; from scuffed up Vans sneakers to patina-polished whole-cut Oxford shoes? For Madsen-Sylvester growing up in London, the clothes of American hardcore bands — Champion hooded sweatshirts, Converse All-Star high-tops – were exotic in the same way that UK imports like Fred Perry shirts and Doctor Martens boots were to the typical American punk kid. He embraced a hybrid British-American look that combined the smartness of the classic English skinhead with American collegiate sportswear and a dash of hip-hop style.

The music and style always went together for him; on a hardcore-related tour of America as a teenager, he took a side trip on a Greyhound bus from Dayton, Ohio to Washington, D.C. just to buy a pair of on-sale chinos from the Ralph Lauren store.

“They’re not necessarily something anyone would associate with it,” he explains, “but the London hardcore kid look in 1988 and 1989 – and there were only ten or twelve of us – was a pair of Converse hi tops, a pair of chinos, and a hooded top. No one’s going to make the link between punk rock and chinos, but for me they are quintessentially a youth culture item,” and one he continues incorporating in his style to this day.

But perhaps more important than the specific styles or items of clothing was the DIY ethos that was the backbone of hardcore music, which has served people in the menswear industry well.

“That’s the thing with hardcore in particular,” says Madsen-Sylvester, “you were staying on other people’s floors, you had a network, you were traveling on your own, you had people staying with you, you had pen pals from all over the world, you were finding out how to book bands and how to put out records, finding out how to get records printed – these were the sort of things you were doing at 15, 16.”

“Hardcore teaches you to go for the things you want to be involved in,” explains Philips. “If you have that interest, do something to get yourself involved in that world. That DIY thing is the basis for most of the things that are good in my life.”

Dan Quigley of The Armoury, a high-end menswear store in TriBeCa, New York, takes the comparison a step further, likening working in retail menswear to being in a band:

“Working for Tom Ford would be like being in a band like U2. It’s like a massive big impact on the world. A team like at The Armoury, that’s gonna be like more like being in Agnostic Front. We are very niche and we’re doing our own thing. It’s very similar: doing a trunk show is like trying to get people to go to a gig. It’s the same kind of mentality, the same kind of approach: you have to find your audience, you have to target them and get them excited about what you’re doing. Same exact thing as playing in a band. We used to print show posters for a band, now we just post it on Instagram for menswear. Getting demos out to different clubs is the same thing as going out there and going to hotels and concierges and saying ‘we have this tailor coming to town from Florence,’ if you have any clients that might be interested in this, come on down.”

Jake Mueser, owner of J Mueser, and one of the most sought-after and acclaimed custom tailors in New York City, got his start in business as a young punk with spiky hair and a studded leather jacket making pins for bands and selling them at shows and local record stores.

“I think that the way I approach business has a lot to do with the do-it-yourself mentality which carried through from those punk rock days,” he says. “I think there’s also an attitude and a fastidious nature that a young punk kid might have toward his clothing that might also be the way  someone who’s stylish and well-dressed might pay attention to his clothing.”

When I was a kid growing up in Downtown Manhattan I once saw a man with a mohawk and leather jacket walking down the Bowery. I tugged at my mom’s sleeve and told her — to her horror —that some day I wanted to look like that guy. By the time I was a full-fledged hardcore punk in Doc Martens, army surplus trousers, and a denim jacket covered in patches, I found myself in a sartorial prison of my own making. I branched out, buying vintage suits and growing my hair out into a mod shag, and was duly punished for it by the punks and skinheads, one of whom ruined a beautiful brown mohair three-button jacket by pelting me with eggs. At some point, even the countercultural can become stifling orthodoxy. Mueser became similarly disillusioned:

“As I got older I got to feeling that it was such a closed off subculture and the things that drew me to punk in the first place — experimentation and free will and free thought -— felt like what I was involved in was the opposite of that. If you did anything that was outside of this strict regimented thing you were made fun of. We were so closed-minded in our thought process. So I started getting turned off from that whole movement.”

“Thats that kind of push pull of the group mentality,” says Madsen-Sylvester, “You want to belong but you also want to show everyone that you’re a bit removed, and a bit better. You’re rebelling against a much larger thing – which is the mainstream, but then within the subculture you’re also rebelling a little bit as well.”

“At one point every kid on my block had a mohawk,” recalls Quigley,  “and it was like, ‘ok, now do we grow our hair long, do we cut it?’ You have to find your own way. I like the individuality of it all – we’re all in menswear but we have our own thing, we’re doing it our own way.”

The question that strikes fear into punks everywhere looms: are we sell-outs?

Fashion has always been a part of punk, however dismayed aging punks may be about Gucci marketing departments reaching out to indie bands. Before there were studs and safety pins, the New York punk scene was a mix of different styles – from the Dictators Bronx tough guy baseball jackets to the Ramones motorcycle runt look to the updated mod revivalism of Blondie. Even when the studs and safety pins did come to the fore in England, it was because Malcolm Maclaren and Vivienne Westwood had made a conscious decision to market Richard Hell’s look as a new youth trend. So when it comes to clothing — punk is often what you choose to make it: a mohawk and a leather jacket or a skinny tie and a shag. What matters more is a sartorial contrarianism that reacts against the mainstream.

“It’s almost more punk to be dressed up these days,” affirms Quigley. “I was talking to a tech guy and he said the rebellious people in his industry are the people wearing ties now. When the casual fridays slipped in and when different corporations decided ‘hey we don’t need to dress up anymore’ I think a lot of us came in at that time because it was anti-establishment to be dressed up. It was definitely counter-culture.”

Whether photocopying zines or writing menswear blogs, recording demo tapes or tailoring jackets, slam-dancing or posing at Pitti Uomo, the sinews of punk and hardcore muscle have — perhaps idiosyncratically, perhaps not —found their way into luxury menswear. A new generation of youth, often with no personal experience of punk or hardcore, is starting to notice and absorb some of the style sensibilities of these men, as shown by the ubiquity of their appearances on the blogs and instagram feeds of men half their age.

“It’s about people making their own things,” says Madsen-Sylvester, “and having an interest away from the mainstream.”