From body positivity to racial justice, here's where politics met the runway this year.

A year ago, New York Fashion Week debuted two months before the outcome of the 2016 presidential election. It was a tense moment in New York, still grounded in optimism, but also fear.

The SS17 shows around the world resonated with feminist slogans that seemed to echo the sentiment. With lower, more accessible price points, Christian Dior debuted “We Should All Be Feminists” T-shirts, and Stella McCartney showed dresses, and all-in-ones with the messaging “Thanks Girls,” embroidered front-and-center.

By AW18, it had become the Age of Trump. The New York fashion industry was peopled with disbelief and rage. NYFW took place in February 2017, just proceeding the Women’s March. A charged mood continued to see designers expressing anti-oppression sentiments with more slogan T-shirts. Prabai Gurung’s collection was all about the slogan T, with messages, like “Love is the Resistance,” “We’re Still Here,” and “I am an Immigrant,” showing there was no dancing around the message.

The label continued production of slogan-T’s in the spring of 2017, releasing new shirts that read, “Girls Just Want to Have Fundamental Rights,” and “Stay Woke,” appealing to a millennial/Generation X crowd who would wear these shirts to protests. Slogan T-shirts benefit both the designer and the consumer. They’re easy to mass manufacture, and the customer can attain the label for a more accessible price point.

Indeed in his September 10, show this year, Gurung continued to run with slogan T-shirts, dominating his collection. The crowd, which included Gloria Steinem seemed to dig the energy of sloganism. Steinem wrote on Instagram, “There is a first time for everything, even at 83! First #nyfw show @prabalgurung, a kind man doing great work in fashion and beyond.”

There is a first time for everything, even at 83! First #nyfw show @prabalgurung, a kind man doing great work in fashion and beyond.

Beyond the slogan, in 2017, there was an uptick of garments imbued with dissidence, extending to a larger narrative about the value of clothes in times of political upheaval. In April 2017, on Beirut’s sea front, wedding dresses hung from nooses in a protest installation by artist Mireille Honein. The wedding dresses called attention to the Lebanese law that allows a rapist to be exonerated of his crime if he marries his victim.

Of course, the history of weaponizing garments as signifiers of political dissidence is not a new phenomenon. Take for example the sans-culottes a group of militant partisans who made up the bulk of the French army in the early stages of the revolution against the Ancien Régime. Culottes referred to the silk trousers worn by the aristocracy, in contrast to the pantaloons worn by the disenfranchised.

Today, New Yorkers piqued by fashion revere it as more than a system of trends for profit, by also as a vehicle of unsayable expression. This is why it’s so vital for fashion to move beyond sloganism. And that’s exactly what’s happening.

For Chromat’s Becca McCharen-Tran, inclusivity in casting is nothing new. Since establishing her young fashion house in 2010, she has regularly cast models of all shapes, sizes and ethnicities. She was one of the first designers to use pregnant, and transgender models (years before Alessandro Michele cast Hari Nef as a regular campaign star). For Spring 2018, McCharen-Tran her body politic messaging a step further, outfitting two models with varying silhouettes in anti-chafing thigh bands by Bandelettes.

The garment resembled a cross between a garter and the elasticized rim of a thigh-high stocking, and are bands sold to women to be worn under tight clothing to reduce thigh-chafing friction.

With this touch, McCharen-Tran, up for this year’s CFDA, thumbed her nose up at the notion of the thigh-gap, and outdated its unrealistic standards of beauty on the runways.

Denise Bidot told Vogue of the show, “This show has so many curvy girls. It starts New York Fashion Week off on the right foot. It’s not just a few of us. We’re not going anywhere and the next generation knows it.”

On September 11, at the Hotel Americano, another current CFDA nominee Telfar Clemens, of Telfar, spread the message of “Family” with a collection by the same name. Hitting the same notes as the label’s “White Castle” polo shirts, which the designer calls an example of “vertical fashion” — or a synchronicity with your peers, the SS18 “Family” collection offered a deconstructed J-Crew catalog for black urban youth. Rather than appropriation, the level of design suggests appreciation and innovation, aesthetically visible in the elegant tailoring. With a collection like this, there’s no need for a slogan, because the visual language speaks to a “woke” audience.

At CFDA winner Raf Simons for Calvin Klein’s SS18 show, shown on September 8, so too, the messaging went beyond sloganism into an exploration of symbols that define political dissidence. The collection featured an array of silk-screened images from Andy Warhol’s Death and Disaster series, which was produced in the 1960s. Also stamped on dresses, tanks, and bags were Easy Rider‘s Dennis Hopper, car crashes, and an electric chair. As opposed to a more hopeful call to rebellion, Calvin Klein’s SS18 imagery depicts messages of deranged Americana. 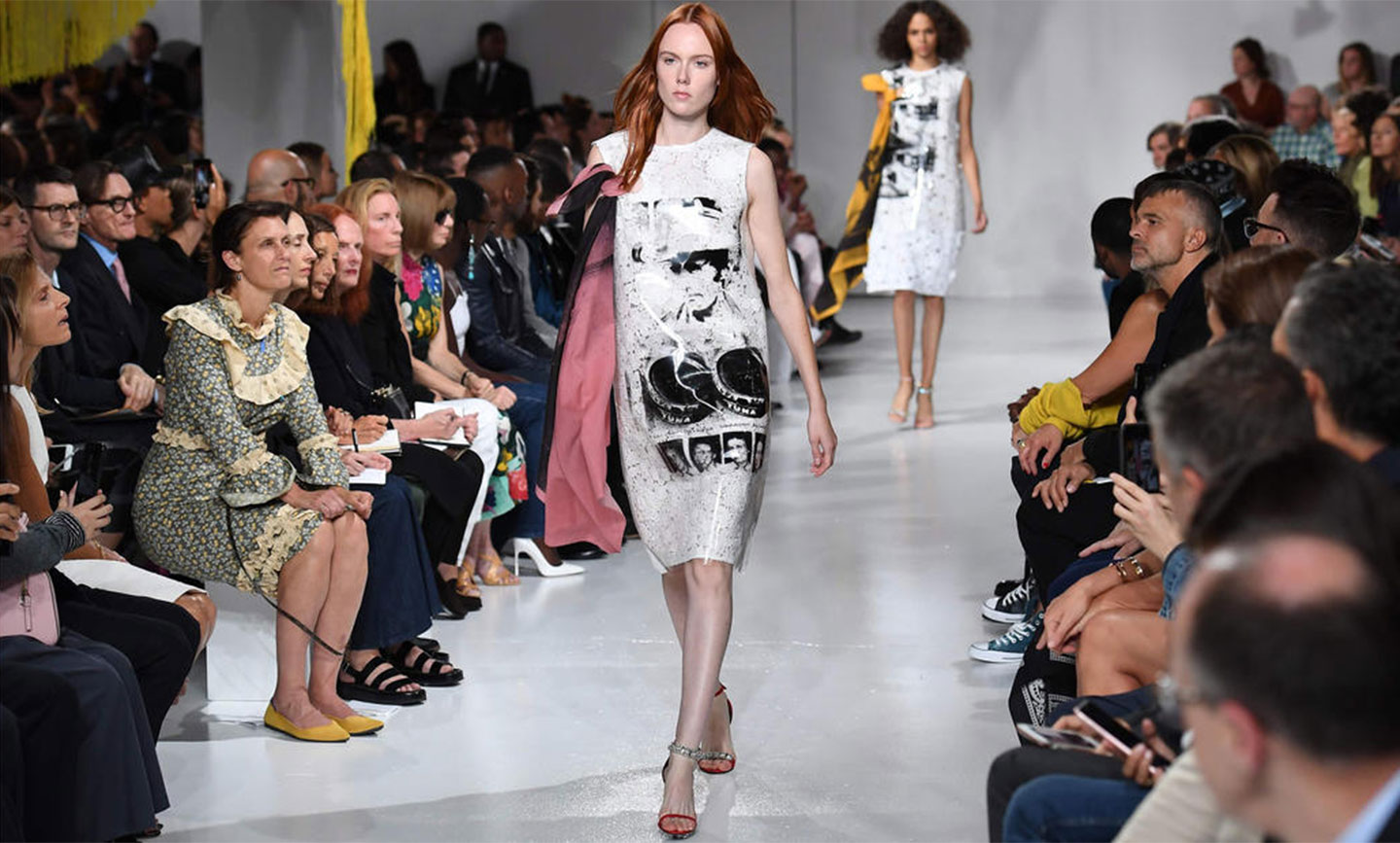 Jason Wu’s, “All-American sportswear,” line which was shown on September 8 in lower Manhattan displayed military tailored looks in traditional army green. The show was offset by urns of flowers. The message here, while not one of sloganism, adopts Americana nostalgia in a similar vein to Simons’ work, with Wu drawing upon the Vietnam War/Flower Power motif of the same era. 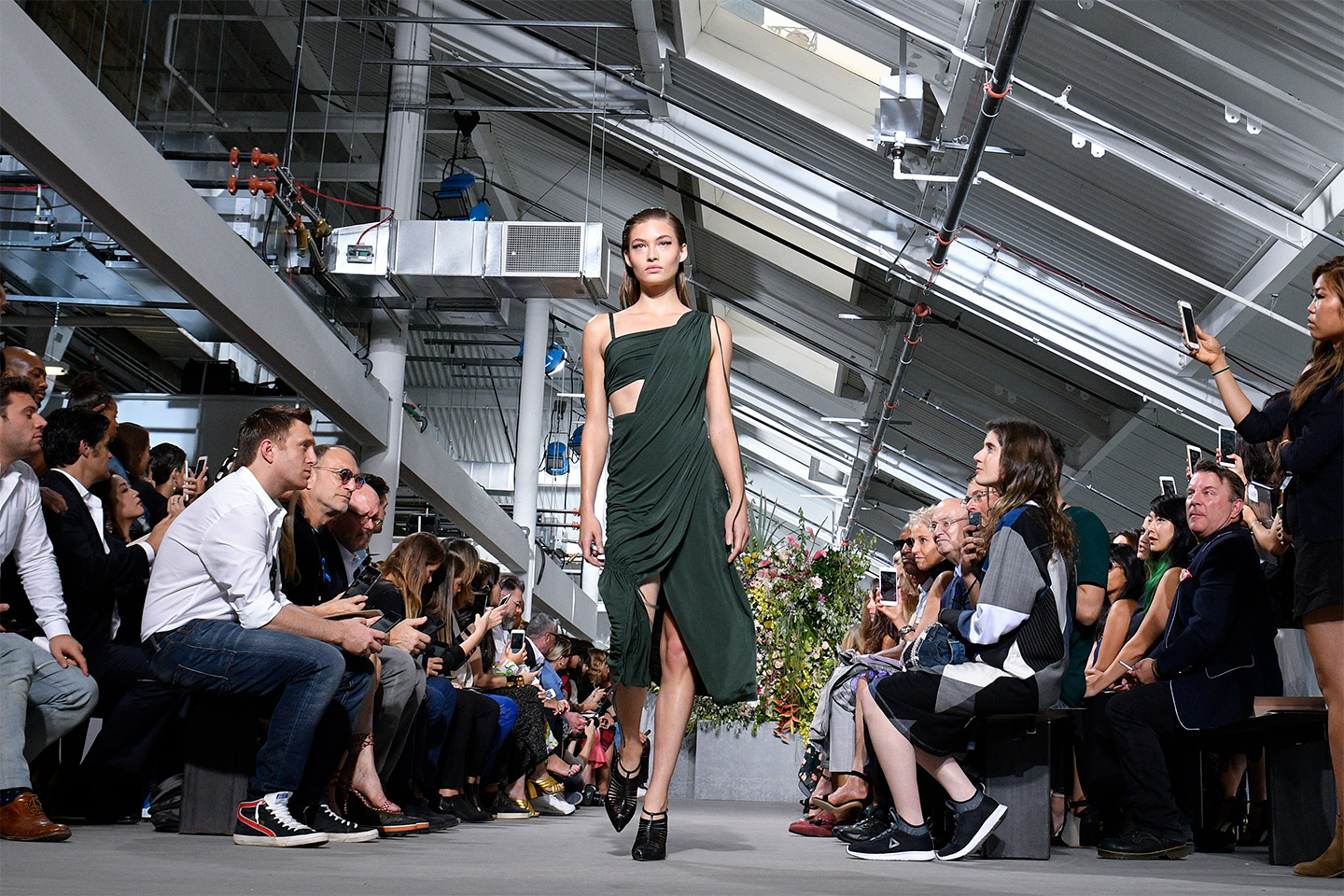 At Músed by Lindsay Jones SS18, which showed on September 8 at  General Theological Seminary located on the grounds of The Highline Hotel, the entire show itself resounded with the designer’s message of a new divinity. “I can’t be on the frontlines protesting and fighting like I like to,” Jones says. “I have a family. But traditionally fashion and art have been able to sneak in messages of counterculture, and that’s what I’m doing here.” 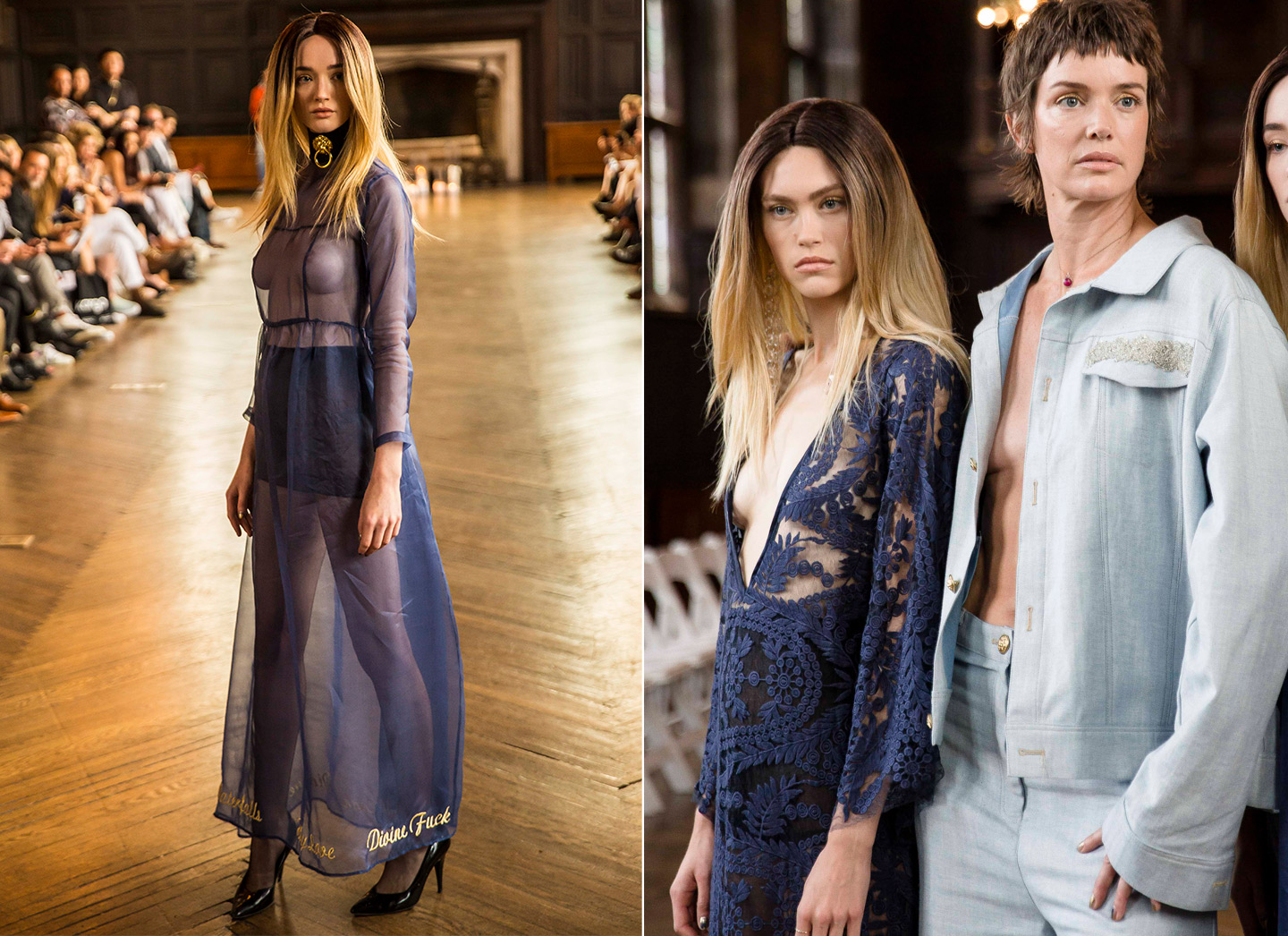 In one dress, the message “Divine F-ck” (among others) is embroidered with gold thread. “Divine F-ck is about tantra, which mixes sexuality and spirituality,” says Jones. She continues, exploring the notion that sex is sacred, and not something to be ashamed of. The collection evokes self-care and on the brink of hopelessness by treating your body like a temple. The political is also personal for Jones. “This year  I fell in love. It felt like an angel came into my life. I don’t mean an angel in a religious sense. I started thinking about making the collection celebrate that these divine moments can come at any time, even when you’re feeling jaded.” Walking in her show was 90s supermodel Sibyl Buck, Jones’ mentor and longtime friend. Buck, 45, was a staple for  Jean Paul Gaultier, Karl Lagerfeld, Alexander McQueen, and John Galliano and a counterpart to Christy Turlington et al.

For Buck, it was important for her to walk right now for a label that is putting energy into the notion of inclusivity. “For a production at such a high aesthetic level, like [ Músed by Lindsay Jones SS18] it’s spiritually moving to see inclusion in the casting.” Buck walked with her daughter, emerging model, Puma Rose Buck, 16. “The message was, ‘there’s a place for you here.’”

The first New York Fashion Week in the Age of Trump is proving to knit together rebellion, optimism and a new divinity in style that that harkens guerilla grit. Or in other words, in true New Yorker style.