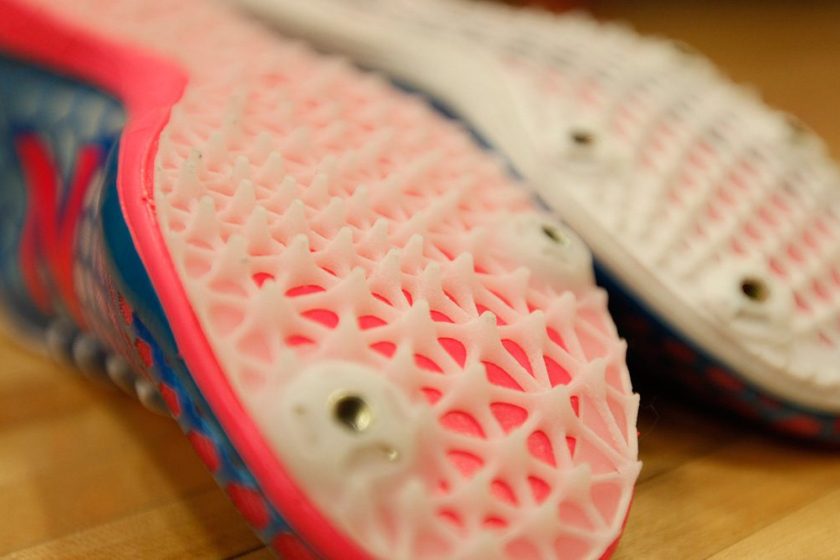 Next month, New Balance will show off an exciting new piece of footwear at the Consumer Electronics Show in Las Vegas: a running shoe with a 3-D-printed midsole.

The midsole, for those not familiar, is the part of the shoe between the outer sole (what touches the ground) and the top of the shoe. In other words, it’s the cushiony area.

In a press release, New Balance is billing its creation as the first 3-D-printed running shoe ever. They will start selling it in Boston by April. Then later, they will begin rolling it out to select stores around the world.

But make no mistake: This isn’t just a novelty item. A 3-D-printed shoe is a game-changer for the entire footwear industry.

“There is potential that printed parts could be superior to the foam parts we’re making now,” Katherine Petrecca, general manager for studio innovation at New Balance, told Fortune. “But the future of on-demand manufacturing is also very attractive.”

By going the 3-D-printing route, New Balance made a shoe that offers better flexibility, strength, and cushioning. But looking farther into the future, 3-D printing has the potential to drastically reduce the length of time it takes to move a shoe from concept to product. (On average, it takes about one or two years for a shoe to go from concept to being shipped. With 3-D printing, it could take weeks. If not days.)

Another thrilling aspect of 3-D printing: It could give consumers the ability to walk into a store, run briefly on a treadmill, and instantly receive a 3-D-printed shoe that perfectly fits their feet. (What’s more, consumers could design what they want this insta-shoe to look like.)

This 3-D-printing technology also means eliminating expensive overhead, because no shoe is produced until a customer orders it.

For all of these reasons, New Balance isn’t the only shoe company that’s going all in on 3-D printing. In October, Adidas unveiled its Futurecraft 3-D midsole and its vision for the future of 3-D-printed shoes. Nike 3-D printed football cleats back in 2014, and this fall its COO, Eric Sprunk, spoke about 3-D printing at the Geekwire summit.

In other words, the fight for the first shoe created completely on a 3-D printer is a three-company race.

Watch a short video about New Balance’s 3-D-printed shoe below.