Plus, the NFL moving the trade deadline is a genius idea

Jakobi Meyers of the Patriots is the scapegoat for a terrible loss.
Jim McIsaac/Getty
By Evan Bleier @itishowitis

With the 15th installment of Monday Night Football signed, sealed and delivered and fewer than seven shopping days left until Christmas, there are just three weeks left to go in the NFL’s regular season. While we can’t get to everything — like rookie quarterback Brock Purdy’s odds of playing in the Super Bowl — here are four of the top Week 15 NFL storylines and whether we’re buying or selling ’em. (ICYMI, here’s what went down last week, along with a clip of Justin Fields taking one for the house for the Bears against the NFC-leading Eagles.)

Buy: Blame Jeff Saturday, Not Matt Ryan, for the Colts

Although it will largely fly under the radar now following a number of big upsets and crazy plays later in the weekend, Saturday’s opening game between the Colts and Vikings in Minnesota was a massive failure for interim Indianapolis coach Jeff Saturday.

Leading the Vikings 33-0 at halftime, the Colts were outscored 36-3 in the second half, including 22-0 in the fourth quarter, as Minnesota was able to force overtime. In the extra frame, the teams traded scoreless possessions before Greg Joseph was able to hammer home a 40-yard field goal to give the Vikes a 39-36 win and the NFC North title while sending the Colts to 4-9-1 on the season in the dysfunctional AFC South. The 33-point comeback by the Vikings was the largest in NFL history, besting when the Bills came back against the Oilers in a playoff game in 1993.

Known as The Comeback, that ’93 game (which featured the coach Saturday took over for in Indianapolis, Frank Reich, at quarterback for the Bills), was the largest come-from-behind victory in NFL history. The most important, however, was when the New England Patriots rallied from a 25-point deficit to beat the Atlanta Falcons 34-28 in overtime in Super Bowl LI. The quarterback for the Falcons that day, Matt Ryan, was under center on Saturday for the Colts and has been the scapegoat for Indy’s loss, but he shouldn’t be. That honor should belong to Saturday, who was also on the sideline just two weeks ago when he saw the Colts give up 33 points in the fourth quarter to Dallas and lose 54-19 in a game that the Cowboys led 21-19 after three frames.

Ryan, who was far from perfect but did have a touchdown and zero turnovers in the loss, certainly deserves some heat for the historic defeat, but it is Saturday, who won his first game after taking over in Indy but has gone 0-4 since and looked greatly unqualified for command while doing so, who deserves the majority of the blame.

“Undisciplined football,” Saturday said after the loss. “Can’t do that. Can’t keep teams like this in it, and we just had too many of those [penalties] on both sides of the ball. Again, there’s plenty of blame to go around.” 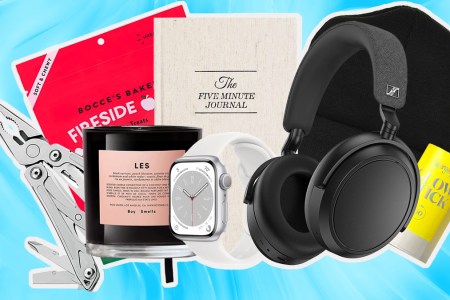 Like It or Not, Amazon Is a One-Stop Shop for Stocking Stuffers

Love them or hate them, the retail giant has everything you need for Christmas morning

It is easy to put blame on New England wide receiver Jakobi Meyers after he inexplicably attempted a throwback pass to quarterback Mac Jones in a tie game that was headed to overtime while he was standing somewhere around midfield on a play that resulted in a Las Vegas win following a scoop-and-score by Chandler Jones of the Raiders, but to do that would be to ignore all of the missteps and errors that came beforehand.

For an NFL, NCAA or high school player, what Meyers did was inexcusable, and any Pop Warner player worth his or her salt would know better. But this is a failure from Bill Belichick on down.

As they have been for much of the season, the Patriots were an undisciplined mess, at least on offense and special teams, and the end result was another loss that shouldn’t have been. That Meyers’s (uncharacteristic for him) error came on a play that should have sent the game overtime followed a touchdown pass in the final moments that allowed the Raiders to tie the game which looked like it should have been overturned does nothing to diminish the gravity of his mistake. The issue is that he should never have been put in a position to make it.

Why the Patriots — who have been conservative to a fault in addition to incompetent on offense for the entire season and really since Tom Brady left town — didn’t either have Jones chuck a Hail Mary or take a knee on the game’s final play is baffling. What they did, instead, run a handoff up the middle that was never going to score and could only result in a negative play whether laterals were involved or not, is mind-boggling.

Watch it again. The initial lateral running back Rhamondre Stevenson tossed to Meyers as he was about to be tackled after taking the ball for 23 yards could have easily been snagged by Las Vegas and returned for a score. Meyers made a mistake, for sure, but he was far from alone, and considering he was one of few offensive players to make plays for New England, he deserves a break.

The same cannot be said for Belichick and the other members of a New England coaching staff who could allow their team to take the field in its current state on a weekly basis. Now at 7-7, the Patriots have three more games left to play and are still mathematically alive for a spot in the playoffs, but their season is all but over. Don’t blame Meyers.

Sell: Tom Brady will be back in Tampa Bay

Following an epic comeback two Mondays ago that saw him lead the Buccanneers on two scoring drives in the final three minutes against the Saints to win a game Tampa Bay had no business winning, it seemed as if Tom Brady may have finally gotten his groove back after getting his team back to .500 on the season.

Now, after losing two straight to drop to 6-8, the somehow-still-in-first-place-in-the-NFC-South Bucs look as if they are all done, and 45-year-old Brady looks as if he wants to be anywhere other than in Tampa Bay playing quarterback.

Somehow a 34-23 loser to the Bengals after leading the Bucs to a 17-0 against Cincy at home in Tampa, Brady was picked off twice, fumbled and also botched a handoff to Leonard Fournette that resulted in a fourth turnover for the visitors. Brady, who finished the game with 312 yards on 30-of-44 passing with three touchdowns, now has five interceptions in his last three games after being picked off just twice in the first 11 contests of the season.

While Brady’s season-long stats (3,897 passing yards, 20 touchdowns, seven interceptions) look fine with three games left to play, they’re much closer to the numbers he was putting up during the end of his time with the Patriots than what he did in his first two seasons with Tampa Bay.

Brady, who had been 89-0 at home when leading by 17 points prior to Sunday and tied a career-high with the four turnovers against the Bengals, is going to be 46 by the time next season and will have no reason to return to the NFL other than to compete for a Super Bowl. As has become obvious over the second half of this season, Brady can no longer do that with the Bucs and will certainly move on in the offseason if — and it’s a big “if” — wants to keep competing for a championship.

If winning football games is a thing Brady is actually still interested in, Tampa is no longer the place for him.

Buy: Pushing back the trade deadline is genius

Already a huge part of the 24-hour news cycle during the pro football season, the NFL is constantly looking at ways to increase its presence when no games are being played during the offseason by extending the draft process and adding emphasis to certain dates during free agency. So, a new initiative that the NFL is considering to add attention to the league during the regular season, while unnecessary, is completely on-brand.

Per a report from NFL.com over the weekend potential changes that were discussed at last week’s winter meeting, the league’s general manager advisory committee discussed the possibility of extending the trade deadline by one or two weeks. Following the discussion, there was “momentum building among some clubs” toward pushing the deadline back as soon as the 2023 season.

This year’s deadline was held on the Tuesday after Week 8 of the season, which was about halfway through the 18-week, 17-game schedule the NFL adopted last year. Traditionally a dull day but increasingly active in recent years, the trade deadline this season saw 10 trades involving 12 players including notable names such as Bradley Chubb, Chase Claypool, T.J. Hockenson and Calvin Ridley.

Should the league push the deadline back and give the league’s contenders more time to separate from the pretenders, it’s logical that even more deals will go down as teams with title aspirations load up on talent from franchises that are already looking ahead to next year.

“More discussion is expected in the coming months, per sources, with approval of any change subject to vote by at least 24 of 32 owners that could come at league meetings in March or May,” per the report. “It’s not yet clear where the NFL’s competition committee will stand on the matter.”

Will it be as busy as the trade deadline in the NBA or MLB? No. But the NFL trade deadline could morph into yet another marquee date on the league’s calendar if the league pushes it back. Here’s hoping they do.