No one captivates the American audience quite like Tiger Woods 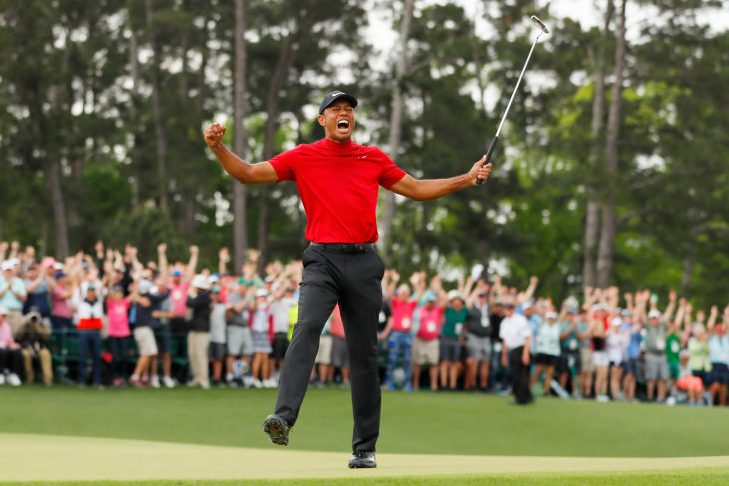 The first time Tiger Woods won a major, there were no iPhones to record it to Instagram — which was also not around. There was also no Google, Twitter or Facebook, and LeBron James, Tom Brady and Lionel Messi were years away from making their respective professional debuts.

It’s a whole new world since Woods’ first win at the Masters in 1997, but America’s love for the generational golfer has not waned. His victory at Augusta this past weekend was all the proof you need, with the announcers constantly reminding viewers of how excited the younger golfers were to be playing alongside their childhood idol, and the fist-pumping chants of “Tiger! Tiger!” after his victory.

While CBS was not able to top the record-setting 15.8 rating from the 1997 triumph during Woods’ first major win since his 2008 victory at the U.S. Open — the early Sunday start time due to weather certainly played a factor — it was still a major win for the network and everybody involved. CBS was able to capture an 11.1 ratings share which peaked at 12.1 around 2:30 Sunday afternoon when Woods was closing in on his first championship in more than a decade. The day after one of the most popular TV shows in the history of television returned for its final season, it was Woods’ win, along with White Walkers and dragons, which would dominate water-cooler conversation.

CBS didn’t just enjoy a simple spike in ratings on Sunday: Tiger’s hunt earned the network its highest Saturday golf rating in four years. Similarly, GolfDigest.com had a record traffic day on Sunday. That’s no small feat considering the stacked field of sports on TV at the same time including NBA and NHL playoff games, as well as early-season MLB action as alternative viewing options. Instead, more Americans tuned in to watch Woods complete his comeback and breathe fresh life into a career that went off the rails on Thanksgiving night in 2009 and bottomed out with a DUI arrest in May of 2017. For an NFL or MLB player, that might not have been a big deal. For the most famous golfer on the planet, it unquestionably was.

Success. Failure. Redemption. It’s the kind of story Americans love — even the most important ones as Woods’ victory led to something even rarer than a hole in one at Augusta, President Trump President Obama finding common ground on something.

But that’s the type of bipartisan approval Woods can generate as he’s one of the few things that will get people on either side of the aisle to switch their sets over from CNN or Fox News. (Game of Thrones is another.)

That’s a great thing for golf as the sport — which saw youth participation, TV contracts and PGA Tour purses balloon after 43-year-old Woods made his pro debut — has yet to find a star who has been able to move the needle on a national level the same way Woods has done throughout his career.

From Rory McIlroy and Dustin Johnson to Jordan Spieth and Brooks Koepka, the PGA has tried to install someone, anyone, as the new face of golf — but it is Woods who remains the sport’s star as no one else has even distinguished themselves from the pack in the same manner he has.

Even had he failed to win at Augusta National, Woods — now a flawed and humanized figure — being back on the prowl for a major title would have reinvigorated younger viewers’ interest in a sport that has seen its TV audience skew older and older with each passing year with a 2017 report showing the average golf viewer was age 64, the highest of any major sport.

Installed as an 8-to-1 favorite at the PGA Championship next month, Woods will be drawing plenty of eyes and attention when he hits the course with a shot at capturing major win No. 16 at Bethpage Black (where he won the 2002 U.S. Open tied for fourth in 2009 in the same event).

An even safer bet than taking Woods at 8-to-1 is wagering that televisions, tablets phones across the U.S. will be tuned to TNT and CBS when the event tees off on May 16 and will stay that way as long as Woods is in the hunt.

Nike, which had its logo on everything from Woods’ shirt to his shoes, probably isn’t complaining as their decision to stick with Woods throughout his struggles on and off the course has finally been rewarded. That could pay off in a big way as Woods’ successful return from a fall from grace could make him more likable, and marketable, than ever before.

“The difference this time is that the people he’s probably inspiring most now have money,” Jay Karen, CEO of the National Golf Course Owners Association, told Golf Digest. “The youth he inspired 22 years ago not the economic engine of the industry. Now we are. So, in that regard, one could make the argument it could have a more lasting effect this time.”

That’s a good thing for him, a great thing for the networks and an exceptional thing for the game of golf. For the foreseeable future, the only thing golf needs to do is worry about how to replace Woods once he hangs up his cleats once and for all. Luckily for the PGA, thanks to his massive Masters win, it likely won’t be anytime soon.