It was 10 years ago today the deal turning the Sonics into the OKC Thunder was announced. 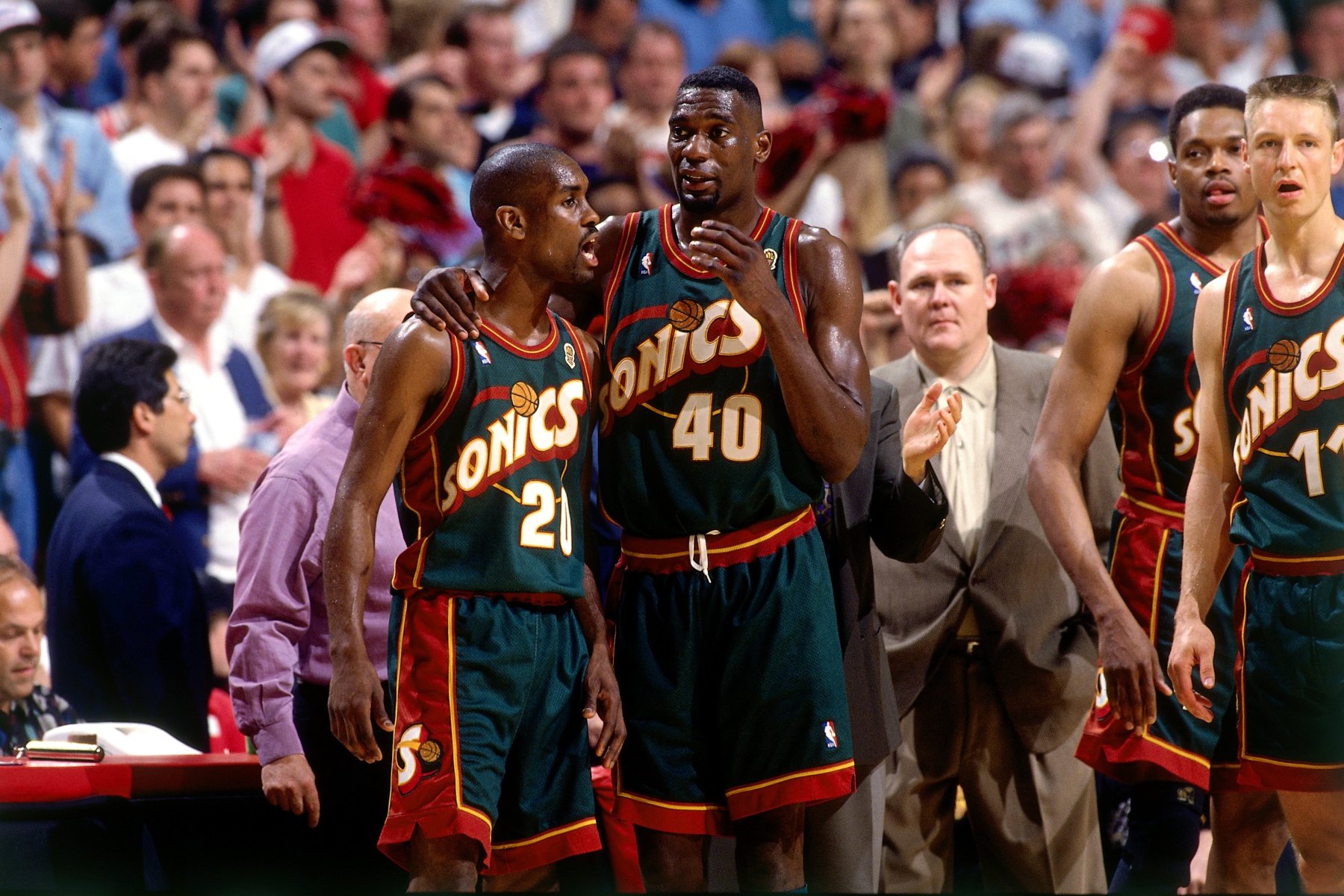 Shawn Kemp #40 and Gary Payton #20 of the Seattle SuperSonics discuss strategy during Game Six of the 1996 NBA Finals against the Chicago Bulls at the United Center on June 16, 1996 in Chicago Iillinois. The Bulls won 87-75. (Andrew D. Bernstein/NBAE via Getty Images)
NBAE/Getty Images
By Evan Bleier / July 2, 2018 5:00 am

July 2, 2008, is a dark day in the history of a city that’s already known for them thanks to its weather, Seattle.

A decade ago, that was the day the city announced it would receive the princely sum of $45 million in exchange for letting the SuperSonics move to Oklahoma City to become the Thunder.

Under the terms of the last-minute settlement, Sonics owner Clay Bennett would have to pay an additional $30 million if the city renovated its basketball arena yet was unable to secure another NBA team in five years. Unfortunately, the renovations to KeyArena were never made and Bennett was never forced to pony up the additional cash.

As a result, the NBA was gone from Seattle, leaving the ghosts of Shawn Kemp, Gary Payton, and Detlef Schrempf in its wake.

It’s a sad story no amount of spiked Starbucks, Tully’s or Peet’s can make better, but far from a unique one on an American sports landscape that’s littered with teams that no longer exist.

Since misery loves company and there are plenty of miserable Seattlians today, we thought we’d take a look at the Sonics and eight other historical teams that are no longer in existence. 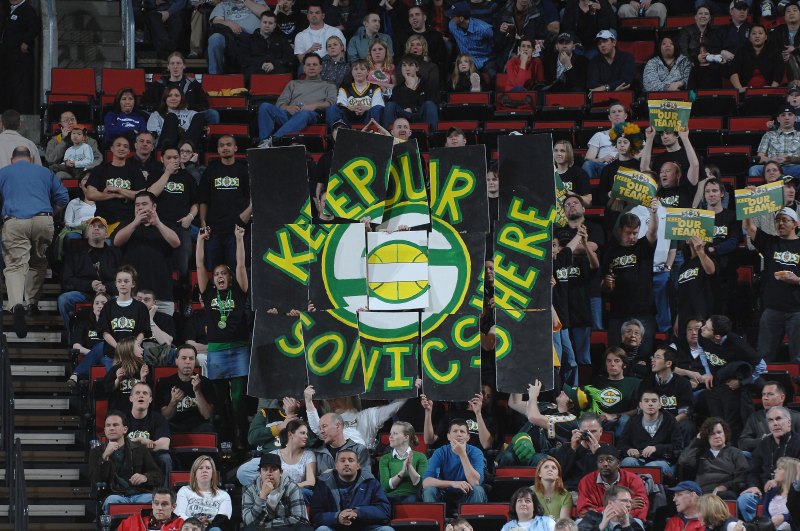 Seattle SuperSonics fans hold up signs in support of keeping the SuperSonics franchise in Seattle for the upcoming season during the game against the Portland Trail Blazers on March 24, 2008 at Key Arena in Seattle, Washington. The Sonics won 97-84. (Terrence Vaccaro/NBAE via Getty Images)
NBAE/Getty Images

Moved: 2008
Best Year: 1996, advanced to the NBA Finals and lost to Bulls
Where (and Who) Are They Now?: Oklahoma City Thunder
What Happened?: Efforts to get taxpayers to foot the bill for a new arena for the Sonics were unsuccessful and Oklahoma City was hungry for an NBA team after hosting New Orleans during the fallout from Hurrican Katrina. It was, so to speak, a perfect storm of events that brought the Sonics to OKC. 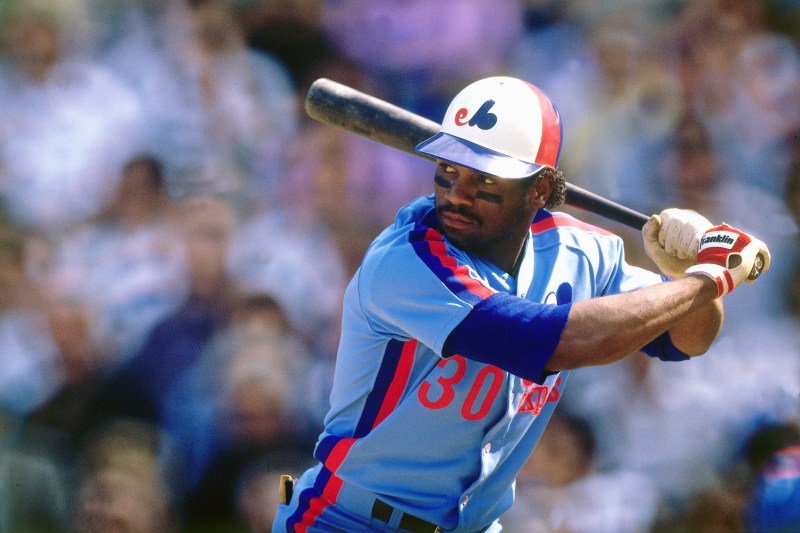 Moved: 2005
Best Year: 1981, won the Eastern Division title
Where (and Who) Are They Now?: Washington Nationals
What Happened?: Actually owned by Major League Baseball in their final years after their prior owner left to purchase the Marlins, the Expos played some of their home games in San Juan during their last seasons in Montreal. Once an approved candidate for contraction, the Expos were lucky to be moved to Washington instead of being eliminated entirely. 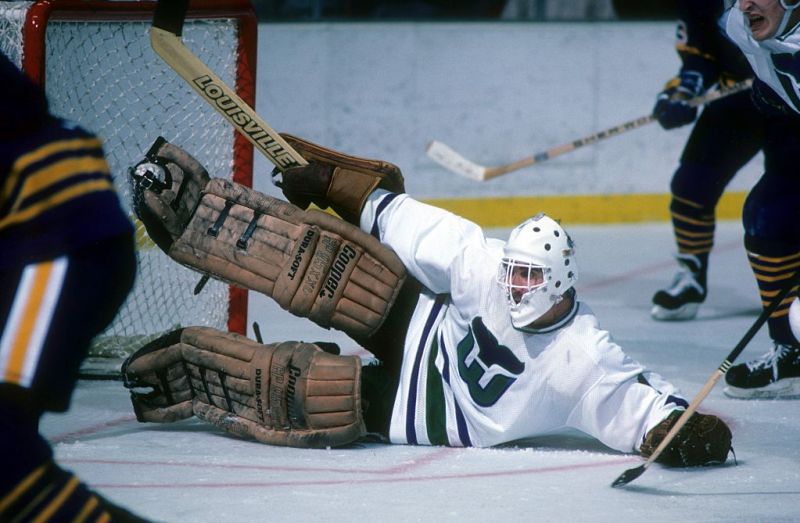 Goalie Mike Liut #1 of the Hartford Whalers lies on the ice while defending the net during an NHL game against the Buffalo Sabres circa 1986 at the Hartford Civic Center in Hartford, Connecticut. (B Bennett/Bruce Bennett Studios/Getty Images)

Moved: 1997
Best Year: 1972-73,  World Hockey Association champs
Where (and Who) Are They Now?: Carolina Hurricanes
What Happened?: While the Whalers played at the state-owned Civic Center, the team and Connecticut could not agree on a new arena deal after two months of negotiations. To leave Hartford for Raleigh, the Whalers agreed to pay a $20.5 million penalty to leave at the end of the 1996-97 season. 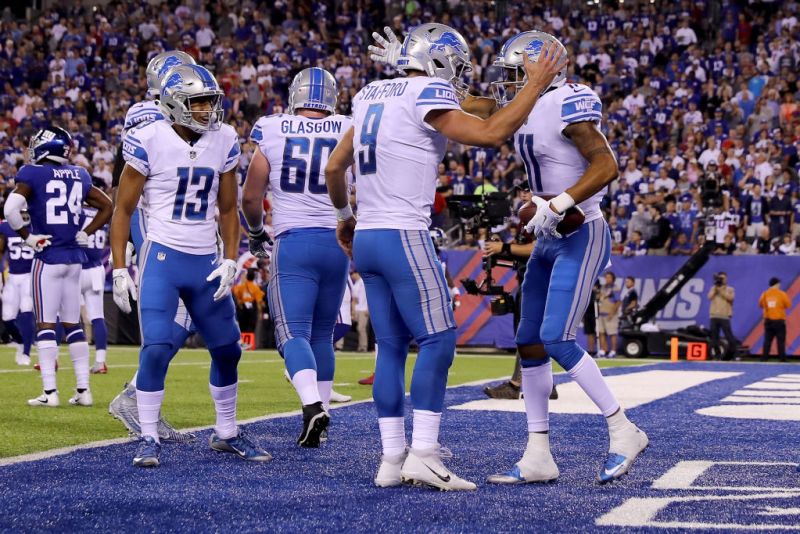 Marvin Jones #11 of the Detroit Lions celebrates with Matthew Stafford #9 after scoring a 27-yard touchdown in the first quarter against the New York Giants during their game at MetLife Stadium on September 18, 2017, in East Rutherford, New Jersey. (Elsa/Getty Images)
Elsa

Moved: 1934
Best Year: 1932, appeared in the first playoff game in NFL history, lost 9-0
Where (and Who) Are They Now?: Detroit Lions
What Happened?: Thanks to the Great Depression, more fans were showing up to watch the Spartans practice than paying to see them play. Radio station owner George Richards of Detroit stepped in and purchased the team for $21,500 with $5,000 of that allotted to square the franchise’s debts. He named the team the Lions as a tribute to MLB’s Detroit Tigers. 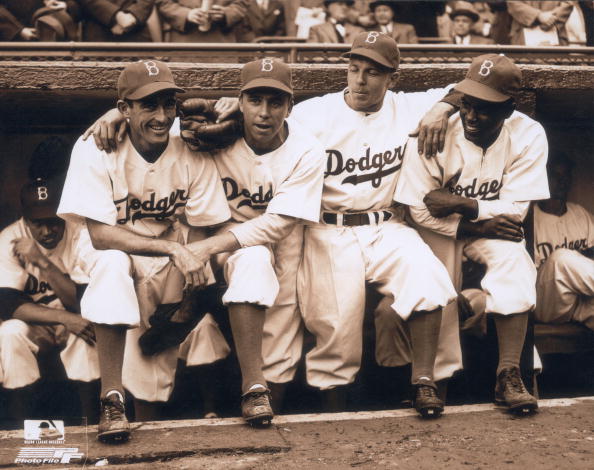 Moved: 1958
Best Year: 1955, won the World Series
Where (and Who) Are They Now?: Los Angeles Dodgers
What Happened?: With both teams facing difficulties getting new stadiums after Ebbets Field and the Polo Grounds had grown antiquated, National League owners voted to allow the New York Giants and Dodgers to move to San Francisco and Los Angeles, respectively. Under the terms of the vote, both teams had to move or neither one could. 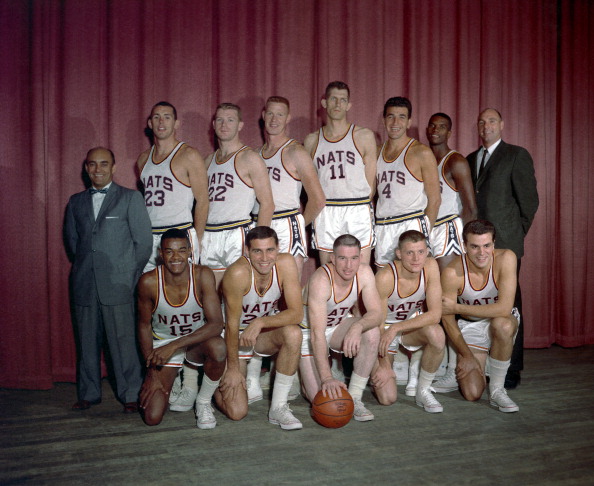 Moved: 1963
Best Year: 1955, won the NBA Championship
Where (and Who) Are They Now?: Philadelphia 76ers
What Happened?: Eight years after winning the NBA title, owner Danny Biasone (one of the inventors of the 24-second shot clock) sold the team. The new owners moved the team to Philadelphia, which had recently lost their Warriors franchise to San Francisco. The departure of the Nationals led to more focus on the NCAA basketball program at Syracuse University. 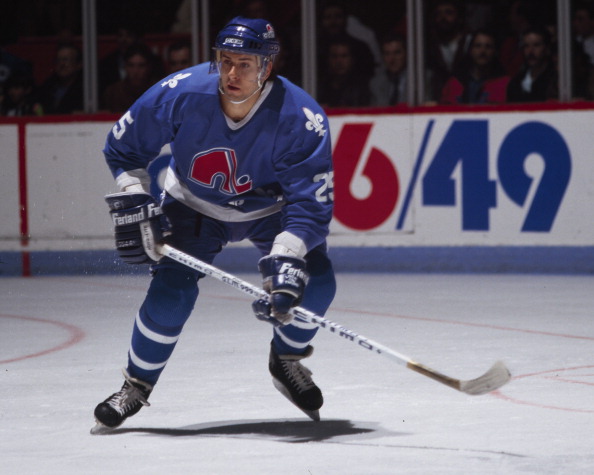 Stephane Morin #25 of the Quebec Nordiques skates Circa 1990 at the Montreal Forum in Montreal, Quebec, Canada. (Denis Brodeur/NHLI via Getty Images)
Getty Images

Moved: 1995
Best Year: 1976-77,  World Hockey Association champs
Where (and Who) Are They Now?: Colorado Avalanche
What Happened?: With the value of the Canadian dollar failing, player salaries skyrocketing and their arena in need of repairs, Nordiques ownership was compelled to sell the team to a group of investors in Denver. To add insult to injury, the Avalanche won the Stanley Cup during their first season in Colorado. 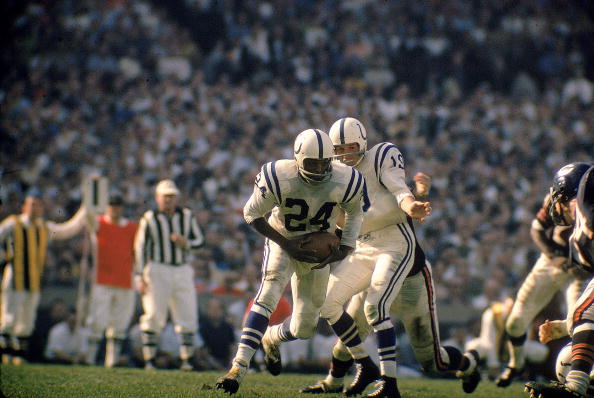 American professional football player Johnny Unitas (1933 – 2002) (#19), quarterback for the Baltimore Colts, hands the ball off to American football player and Colts running back Lenny Moore (#24) during a game with the Chicago Bears, mid-1950s to mid-1960s. (Robert Riger/Getty Images)
Getty Images

Moved: 1984
Best Year: 1970-1, won Super Bowl V
Where (and Who) Are They Now?: Indianapolis Colts
What Happened?: Following a disagreement between the Colts and the city about who should pay for repairs to the team’s stadium, the Maryland state legislature passed a law allowing Baltimore to seize the franchise from owner Bob Irsay. Without any public announcement, Irsay had movers pack up the team’s offices in the middle of the night and moved the team to Indianapolis while the residents of Baltimore slept. 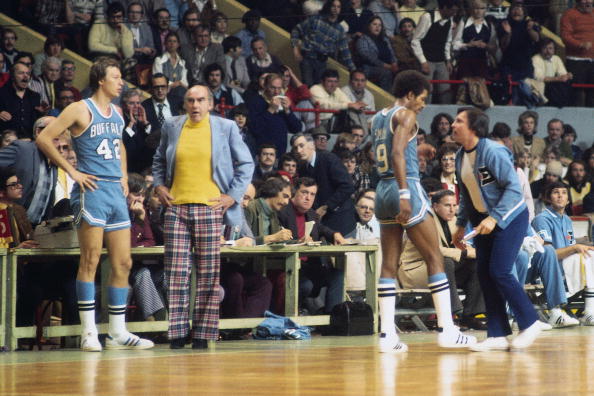 Jack Ramsay, head coach of the Buffalo Braves talks with Jack Marin #42 during a game played against the Boston Celtics in 1974 at the Boston Garden in Boston, Massachusetts. NOTE TO USER: User expressly acknowledges and agrees that, by downloading and or using this photograph, User is consenting to the terms and conditions of the Getty Images License Agreement. Mandatory Copyright Notice: Copyright 1974 NBAE (Dick Raphael/NBAE via Getty Images)
NBAE/Getty Images

Moved: 1978
Best Year: None, no championships or conference or division titles
Where (and Who) Are They Now?: Los Angeles Clippers
What Happened?: With ownership deliberately putting a shabby product on the floor so attendance would tank and they would be allowed to break their lease, co-owner worked out a deal with the owner of the Boston Celtics that allowed them to switch franchises. Per the agreement, John Brown took control of the Celtics and Irv Levin took control of the Braves. A California businessman, Levin then moved the team to San Diego.