Take a New Look at Jackie Robinson On His 100th Birthday

To commemorate Jackie Robinson’s 100th birthday, a new exhibition featuring never-before-published Look magazine photos of No. 42 opened today at the Museum of the City of New York.

Interspersed with the images, the walls of the exhibit are adorned with words from Robinson about his career, his wife, and the game as well as quotes from others about the trailblazing ballplayer.

In addition to the 32 Look mag photos, the exhibit – In the Dugout with Jackie Robinson: An Intimate Portrait of a Baseball Legend – includes artifacts (Robinson’s glove), memorabilia (a vintage Brooklyn Dodgers pennant) and copies of Look that showcase Robinson as a ballplayer as well as an author (he contributed three autobiographical essays to the magazine and even announced his retirement in its pages).

Issues of Time and Life with Robinson on the cover are also on display. 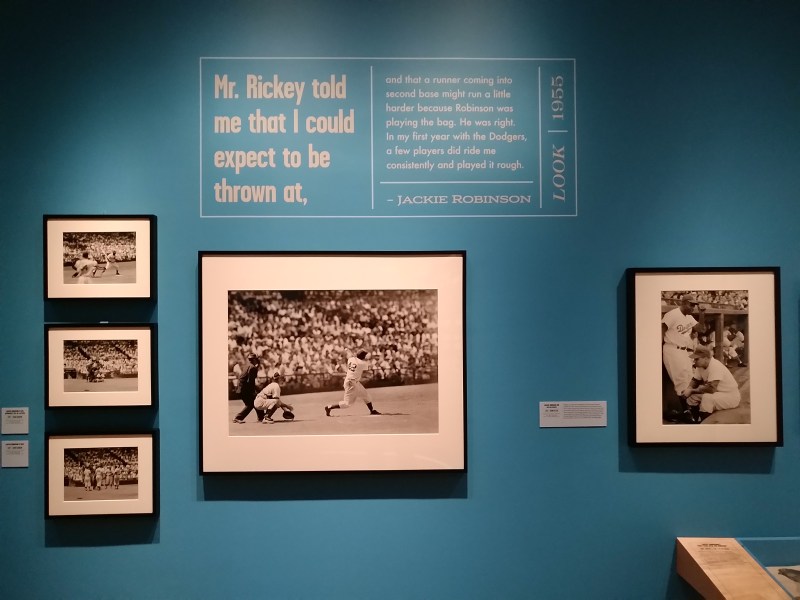 “We wanted to show the hate, but then also the triumphs, the victories, the closeness he had with his family and teammates,” said Sean Corcoran, the museum’s Curator of Prints and Photographs.

Taken after Robinson had been in the league for more than a year, the images show relationships that had been given enough time to flourish and grow. This is especially clear in series photographs where you can see Robinson speaking and interacting with teammates Pee Wee Reese or Duke Snider.

“The exhibition includes photographs which are almost never seen … Intimate photos in the clubhouse, moments between baseball players that allow you to see what has become a close relationship between Jackie and his teammates,” Corcoran said. “You can also see his prowess on the field. Him stealing bases. But you can also see him being thrown at. So you see the complexities of his life on the basepaths and behind the scenes. And then, of course, you see intimate moments at home with his family. We tried to show, through words and texts, the complex life of an important man who made a real impact on American history.” 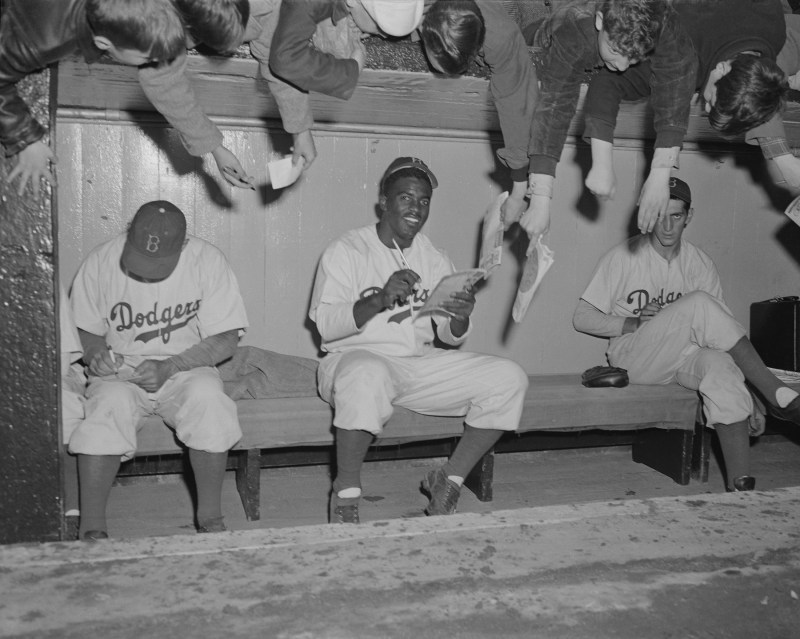 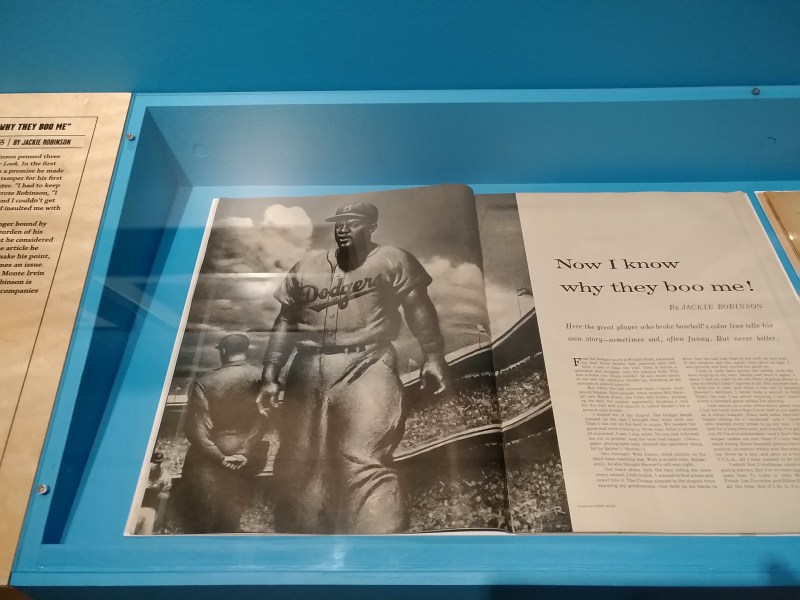 As a subject, Robinson really stands out. And it’s not just because he is the only person of color in many of the black-and-white photographs.

“He’s a strong individual. When you see him on the field, it’s clear there is a confidence in his playing and a certain ability,” Corcoran said. “That comes through even in a still picture. You can see a physical ability in his pictures. In the clubhouse pictures, there’s a few where he isn’t even dressed and is having a conversation and you can see an openness in his demeanor which is very compelling. Those are my favorite pictures in the show. The ones that show Robinson’s openness to his teammates.”

The show also includes images of Robinson at home with his wife Rachel and their children. There’s also a grainy – yet captivating – home movie which shows Robinson in the backyard hitting grounders and pop-ups and going over baseball fundamentals with his son Jackie Robinson Jr. and some neighborhood boys. 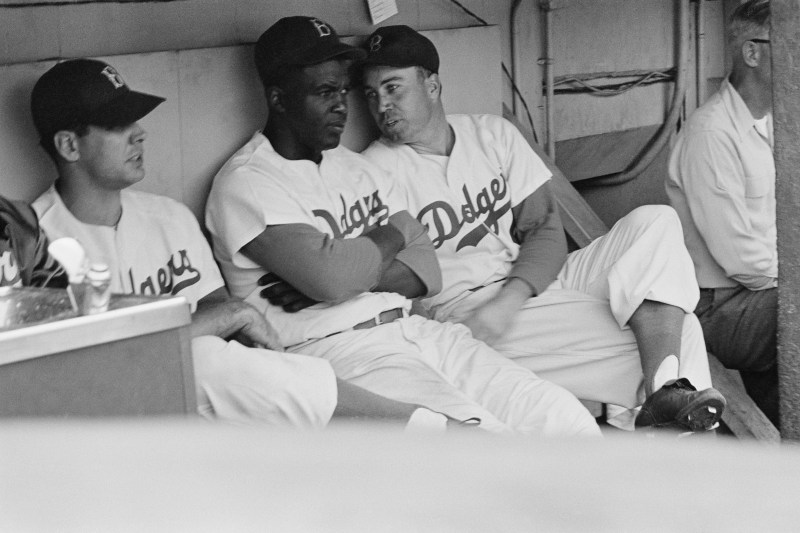 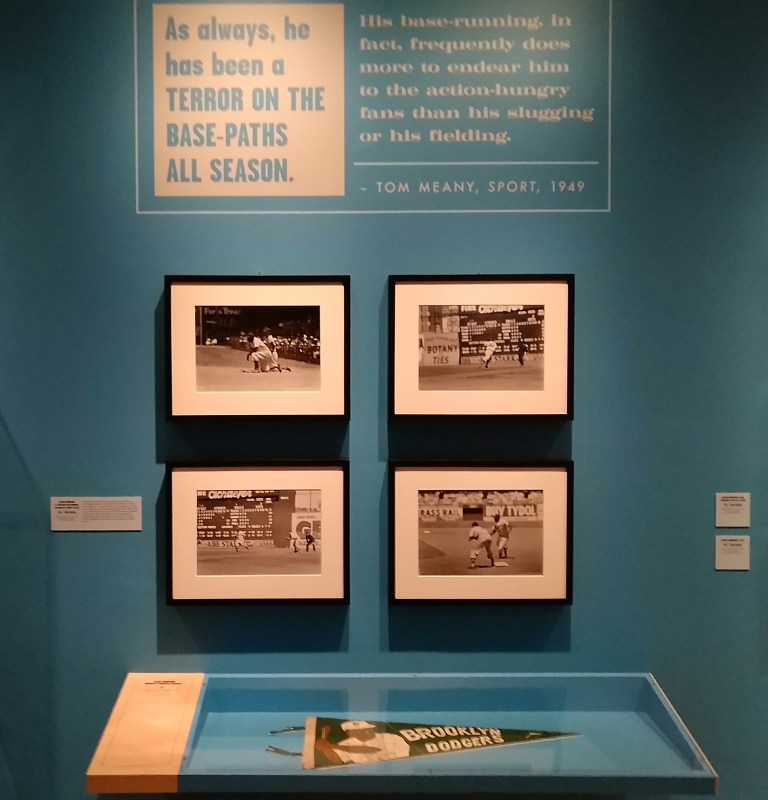 “We only saw a few of them [home movies] but the Jackie Robinson Foundation has many more,” Corcoran said. “We felt the clip fit perfectly into our section about his home life. So it was kind of a natural fit in what we were trying to do – make him more human with a wife and family. Showing he had a life outside of baseball.”

But in addition to showing Robinson the man, the exhibition also strives to make it plain why he is an important figure not just in sports, but in American history.

“We’re lucky that Major League Baseball celebrates Jackie Robinson Day every April 15th, but it’s important to remind people that there were these barriers and that it took real people to break them,” Corcoran said. “Hopefully, the exhibit will get people to reflect on the past, what’s been accomplished, and looking forward to what we still need to accomplish. All these pictures were made in the ’40s and ’50s. We hope people can absorb them and think about where we’ve been, where we’ve come from and what we need to do to keep moving forward. 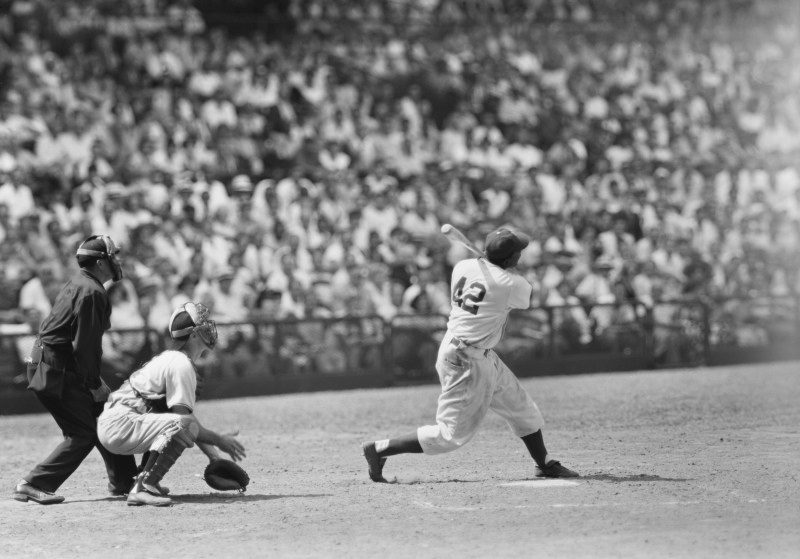 Jackie Robinson at bat, 1949. (Photograph by Frank Bauman for Look Magazine)
Museum of the City of New York 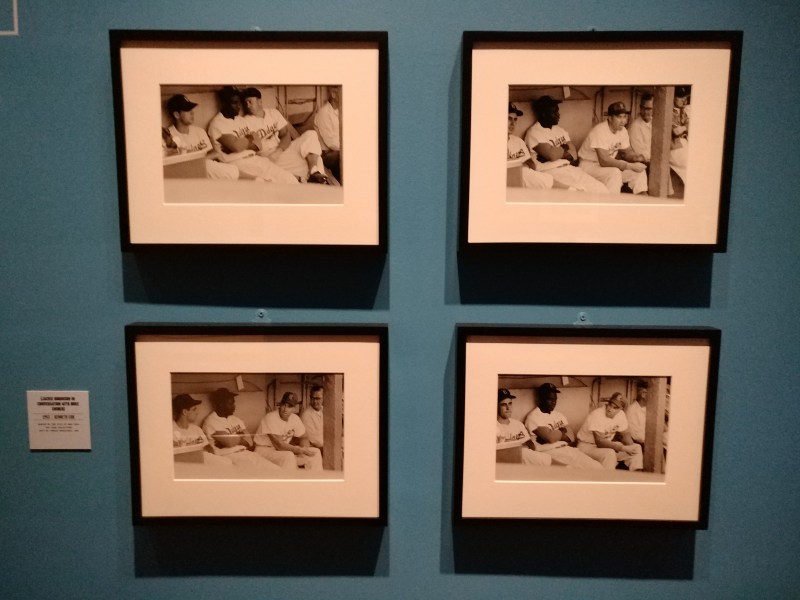 The exhibition serves another purpose as well as it leads off a centennial celebration of Robinson’s life by the Jackie Robinson Foundation.

In the Dugout with Jackie Robinson: An Intimate Portrait of a Baseball Legend is open at the Museum of the City of New York at 1220 Fifth Ave at 103rd St. Open Daily 10am–6pm.