Ever Seen a Great White Shark Get Stuck in a Cage Full of Food, Er, Divers?

Usually you have to pay double for this kind of action

How’s your day going? Are you in an underwater cage? Is there a shark in it? No?

Not so for four divers who had a great white shark get trapped in their dive cage near Guadalupe Island, 160 miles off the Baja Peninsula, earlier this week.

They were with Bluewater Travel, a shark diving expedition company, when a 13-15 foot great white severed the air hose at the top of the cage and then lodged itself inside the cage with the divers.

In her trip report, operations director Katie Yonker wrote: “The first minute or so felt like a horrific earthquake underwater, and I kept thinking, ‘We just need to wait this out.’ But in the back of my head I feared the cage would break apart and this would be the end for me.”

This terrifying ordeal happened because of the cage that was used. For awhile, dive operators around Guadalupe Island — known as the mecca for adult great whites — used surface cages surrounded by protective bars. Then companies started toying with submerged cages with less protection. This was one of those cages, which had an air hose attached to assist the less experienced divers. When the shark severed that hose, there was an explosion of air bubbles, and then the shark forced its way into the cage, likely in an effort to snatch the chum bag of bloody tuna the dive team was using to bait it.

Of course, it probably didn’t feel that way to the humans in the cage.

The divers were freed as the cage was brought to the surface, and then swam to their boat for safety. The shark was then freed, and it’s not clear whether it was harmed during this process.

What is clear is that better cages are in order, and, in the case of this operation, probably four new wetsuits, too. 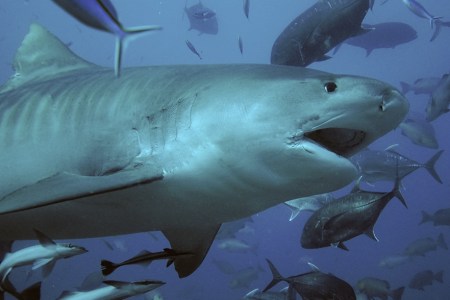