Office of Bad Ideas: Yes, Nuclear Landmines Were a Thing

'There was a period of time... we basically nuclearized everything we could.'

Nuclear weapons experts and analysts set themselves in a tizzy last week after NBC News reported President Donald Trump said he wanted what amounted to a tenfold increase in America’s nuclear arsenal. Trump and Defense Secretary James Mattis strenuously denied the story, the NBC reporters stood by it and that’s pretty much where it landed. But amid the flurry, the following popped up on Twitter from national security observer Luke O’Brien, who was discussing how the nature of some particular missions had changed since America got rid of most of its nukes:

None of those missions call for a nuclear weapon today. Nor do we need the hundreds of nuclear land mines we built.

Hundreds of what now? Nuclear landmines? That can’t be right. Who would even…?

But of course nuclear landmines were a thing early in the Cold War, part of a class of small nuclear weapons called atomic demolition munitions (ADMs), which were themselves part America’s arsenal of tactical or battlefield nukes. Some of the landmines were forward deployed, though not buried, in Europe and South Korea for years, according to Stephen Schwartz, editor and co-author of Atomic Audit: The Costs and Consequences of U.S. Nuclear Weapons Since 1940.

“There was a period of time in the beginning of 1950s and continuing into the 1960s where for technological and political reasons… we basically nuclearized everything that we could,” Schwartz told Code and Dagger. “There was talk in Congress about how we should basically nuclearize the entire Army and Navy and wouldn’t that be a wonderful thing because we could kill a lot more people with fewer but more powerful weapons at a lot less cost? … The reality turned out to be very much different.”

The U.S. government wasn’t alone in its thinking.

Back in 1954, specifications surfaced in the British War Office for an atomic landmine project called Blue Peacock for use against a possible Soviet invasion of Germany, according to a 2003 article written by David Hawkings, a former employee of the Atomic Weapons Establishment (AWE). Hawkings said he based his article on a batch of unclassified documents about the program in the British Public Record Office. 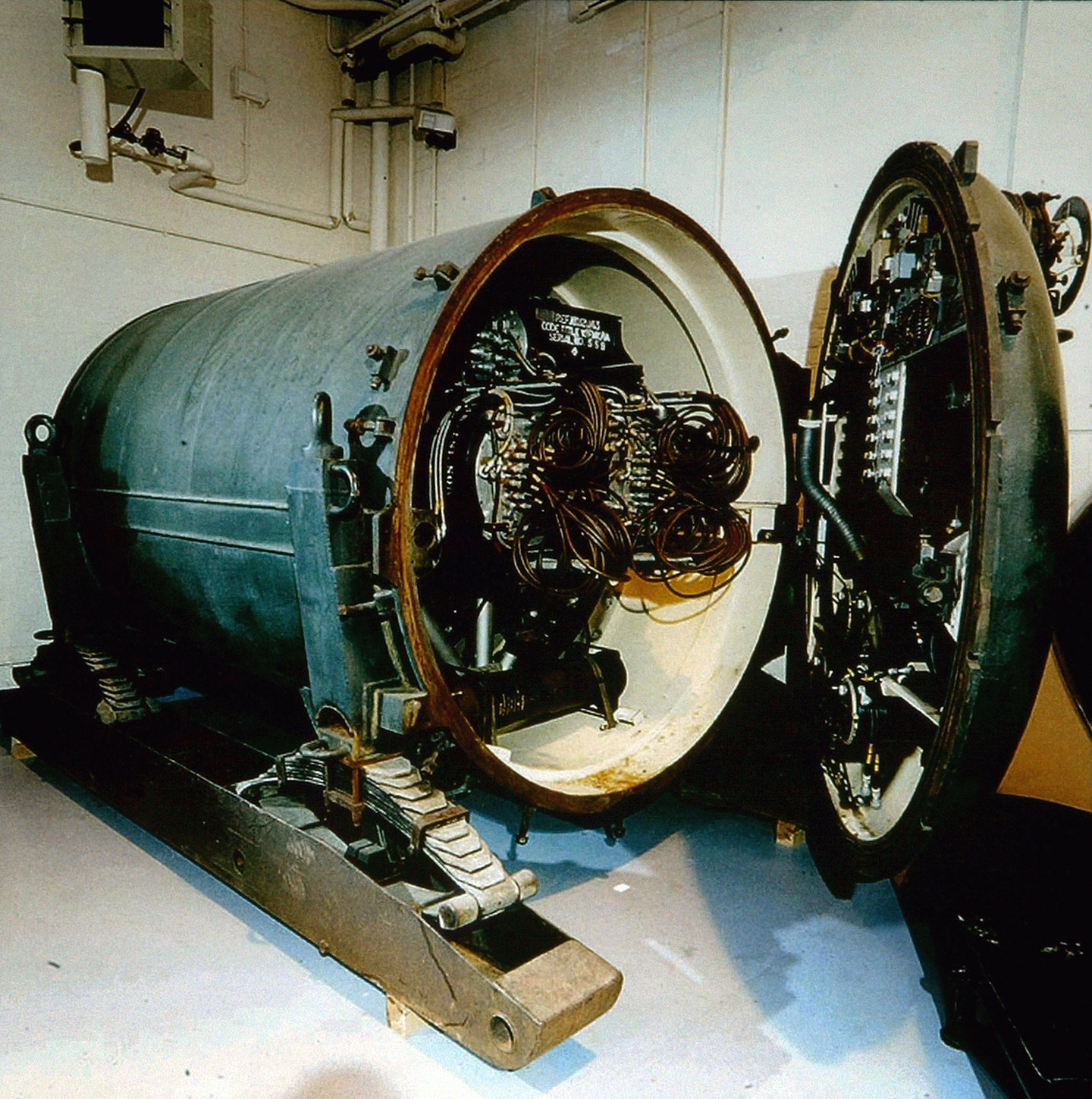 A picture is seen on display of a seven-ton nuclear landmine codenamed “Blue Peacock” at an exhibition of secret nuclear plans from the cold war at the National Records Office on March 31, 2004, in London (Getty Images)
Getty Images

Hawkings found that by mid-1955, the Army’s Engineer in Chief wrote in a report, “The large scale destruction caused by the explosion of an atomic charge makes an atomic mine particularly suitable for use in demolitions. A skillfully sited atomic mine would not only destroy facilities and installations over a large area, but would deny occupation of the area to an enemy for an appreciable time due to contamination.”

By July 1957, the Army Council had decided to acquire ten Blue Peacock mines and to station them with the British Army of the Rhine in Germany. If a Soviet invasion seemed likely, the weapons would be transported to the target area, where they could be deployed either on the surface, buried, or submerged in a river or lake. Detonation could be either by wire from a command post up to three miles away, or by an eight-day clockwork timer. Anti-handling devices included a pressure hull and a simple tilt switch. If the pressure were lost, for example if gunfire pierced the hull, or the weapon was moved or filled with water, it would detonate in ten seconds.

…Assuming everything went to plan, the instruction manual predicted a yield of 10 kT [kiloton], producing a crater 375 feet in diameter from a surface burst, or 640 feet if buried 35 feet below the surface.

(For reference, the nuclear bomb that exploded over Nagasaki, Japan is estimated to have produced a 21 kiloton yield.)

However, by 1958 it was becoming clear to the Brits that the weapon wasn’t practical, militarily or politically, and the Blue Peacock project apparently died a quiet bureaucratic death.

The U.S. military was not similarly deterred and actually produced 1,000 nuclear weapons in four different varieties designed to be “deployed as landmines” by the Army and the Marines, according to statistics compiled by the Bulletin of the Atomic Scientists. The largest of the four could produce a yield of up to two kilotons — a fifth as large as the British version. 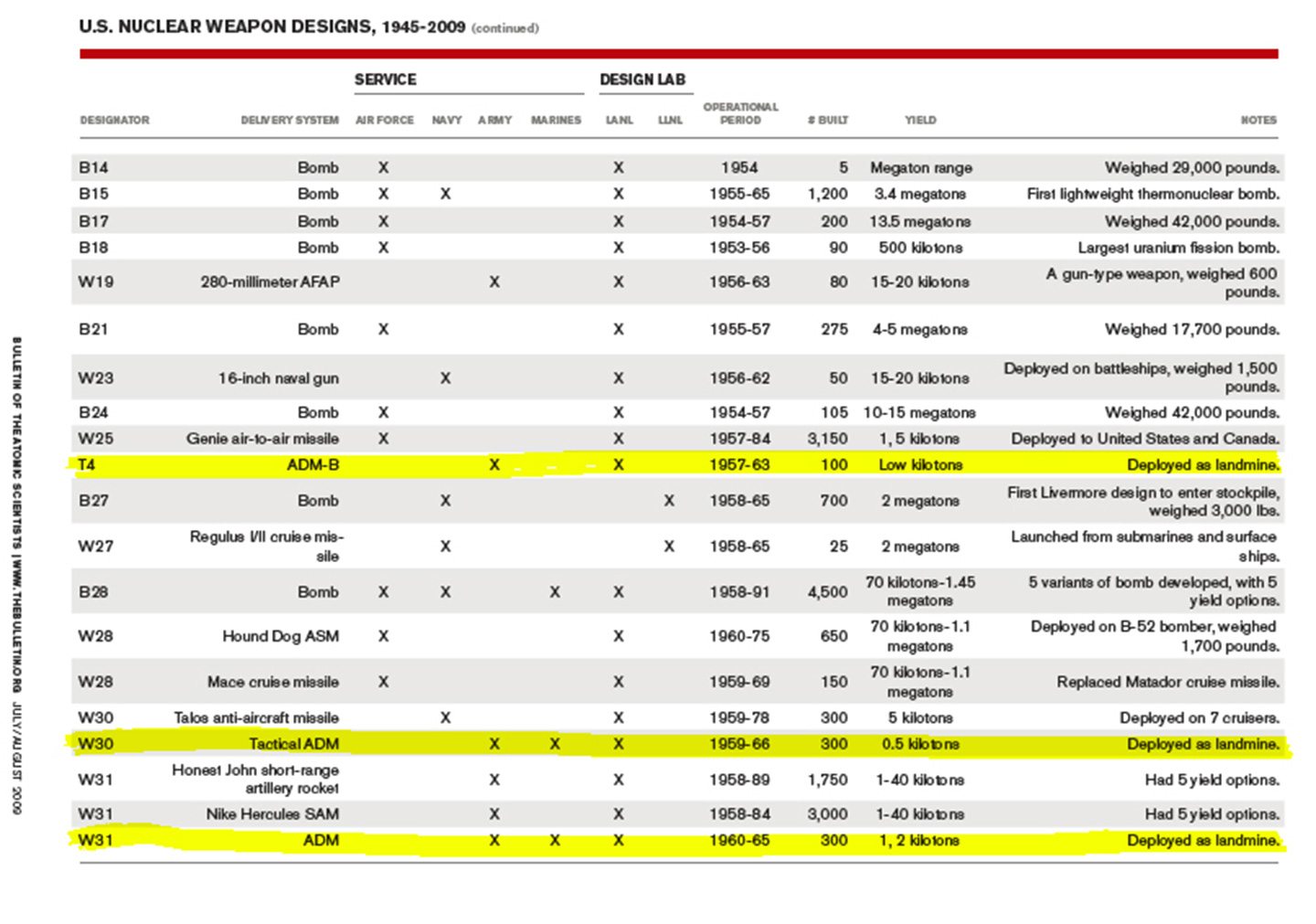 The stated reason for the development of the landmines and other ADMs was to give a small group of soldiers, or even an individual, the ability to destroy enemy facilities or to create no-go areas to change the layout of the battlefield. The landmines would likely have been detonated remotely or by timer, rather than by pressure as with some more common conventional landmines.

“[ADMs] were intended mostly for what you might call nuclear landscaping — to create irradiated, impassible craters or to collapse mountainsides into narrow passes in order to obstruct likely invasion routes and bottleneck enemy forces,” says a 2014 Foreign Policy report on ADMs and the Army soldiers who trained with them. “One engineer recalls setting up an ADM in the middle of a forest: ‘The idea was to blow these trees across a valley to create a radioactive physical obstacle for vehicles and troops to get by,’ he said. The Army’s countermobility field manual taught soldiers to use ADMs for ‘stream cratering,’ in which atomic explosions near small waterways would ‘form a temporary dam, create a lake, cause overbank flooding, and produce an effective water obstacle’ for enemy forces.”

In September 1967, NATO’s Nuclear Planning Council held discussions about the use of ADMs and a meeting summary said that “while agreeing that conditions may vary in different areas, [the council members] recognized that in certain circumstances the use of atomic demolition munitions might have significant military advantages by creating obstacles as part of a comprehensive defence system.” The group agreed to study the issue further.

But an equally important, though unstated reason for the development of ADMs, according to Schwartz, was that the U.S. Army wanted desperately to get into the nuclear game, which at the end of the Second World War was dominated by the Air Force.

“The larger over-arching picture: This was developed in a time when the Army was grasping for relevance in the nuclear age,” he said. “There were two arms races during the Cold War. There was the one we all know about, which was the United States vs. the Soviet Union. But then the lesser known one, what drove a lot of procurement decisions, and that was the inter-service rivalry between the Air Force, the Navy and the Army. And the Army in particular was scrambling…

“All this money, all this prestige was attached to this new weaponry and the Army needed a mission. So what did they do? They created requirements for a nuclear weapon,” said Schwartz, who is also an adjunct professor at Middlebury Institute of International Studies at Monterey. Overall, the Army eventually acquired 26 different kinds of nuclear weapons.

But Schwartz said that after the weapons were in the field, the Army realized the ADMs were more trouble than they were worth. They required specialists to do upkeep on the weapons, they didn’t fit well in the order of battle, they were potentially a threat to America’s own troops and there were a host security concerns. A declassified 1985 CIA document on Chinese nuclear capabilities said that the Chinese military at the time was not believed to have ADMs or to have much incentive to build them since they were “difficult to emplace quickly or in combat and may not be in the right place when they are needed.”

Perhaps the biggest worry, Schwartz said, was that the use of any nukes by the U.S. would provoke the “other side” into responding with their own, larger nuclear weapons, ending in catastrophe for both. Cold War-era CIA documents indicate that Soviets did not have ADMs either back then, but had plenty of other strategic and tactical nuclear weapons at the ready. The Soviet defense doctrine called for a “massive” response to any use of nuclear weapon — including an ADM, U.S. analysts believed.

From there, as a 1970 CIA memo put it dryly, “there is… no assurance for either side that waging war in Europe with nuclear weapons would result in a favorable outcome.”

“This whole concept was ridiculous,” Schwartz said. “And no one really thought through why they were doing this other than the fact that it was good for the Army.”

For some or all these reasons, the four types of nuclear weapons that the Bulletin of the Atomic Scientists said were designed to be used as landmines were only operational for a few years, from the late-1950s to the mid-1960s. But at least two of their ADM cousins stayed in service for decades, and the Army kept up the training of atomic demolition specialists, before the program was shut down as part of a larger nuclear drawdown in the 1980s.

This summer, some former Army atomic demolition soldiers reportedly got together for a rare reunion at Fort Leonard Wood in Missouri. Despite the now-questionable use of the nuclear landmines and other ADMs or bureaucratic decisions made far above the ex-soldiers’ heads, one of the former engineers said the men he trained with “feel that we did our service proudly and effectively.”

“We are a small, close-knit group of people who were dedicated to one purpose, and one purpose only, and that was to defend the United States in case of conflict,” Larry Wetta, who trained to be an atomic demolition specialist in the 1960s, is quoted as saying.

It’s a strange chapter in Cold War history, and there’s no indication the U.S. is going to head back down the road of nuclear landmines. While Trump previously said he wanted to “expand” America’s nuclear arsenal, potentially restarting a Cold War-style arms race, he assured reporters more recently he only wants America’s existing nuclear forces in “perfect condition.”

Read more from Code and Dagger: An Eclipse, Soviet Scientists and a Deeply Suspicious CIA

Tour Commish Jay Monahan Says PGA Truce With LIV Series Is "Off the Table"
You Won’t Believe How Easy Charlie Palmer’s Steak Recipe Is
Why You Should Eat Fruits You’ve Never Heard Of
Meet Keng-Fu Lo, the Best Car Garage Designer on the Planet