10 Lightweight Blazers to Wear This Summer

From linen to seersucker to the classic go-to-hell 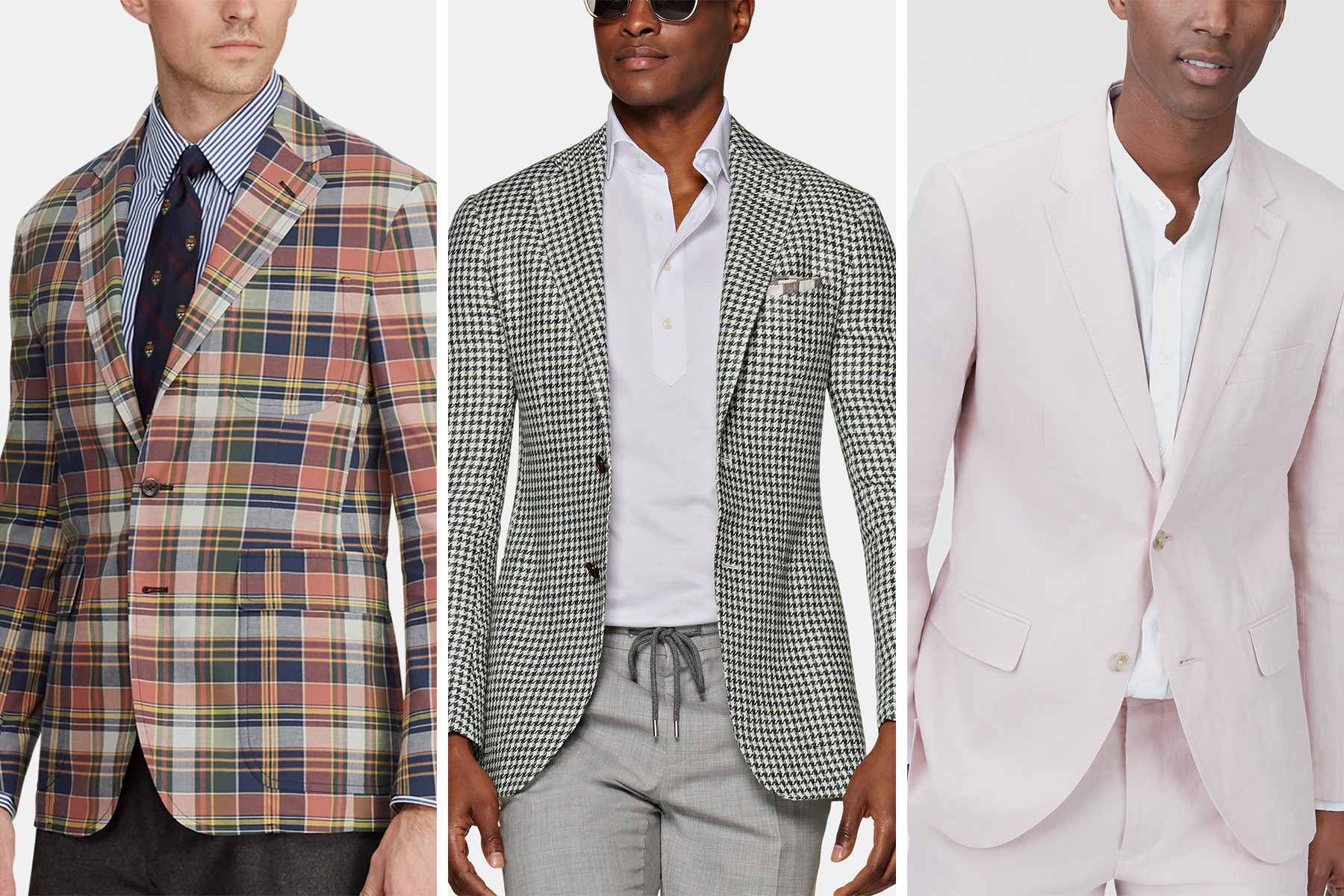 When it comes to blazers — as we will incorrectly call them here because no one actually says sport coats — we are huge proponents of good old-fashioned 100% American wool. And of British tweed. And of the hugely underrated camel hair. And of professorial corduroy, of course.

But we’re also huge proponents of not sweating profusely in public.

Which is why, come spring and summer, we switch out those heavier options for blazers made of lighter materials like linen, seersucker and madras. Below, 10 of our favorites, among which you’ll find options ranging from the conservative to anything but.

You might see a plaid-patterned light grey sport coat and think it’s not the most practical of garments, but we’d disagree. You can dress it up with some chinos (or its matching trousers) and a crisp dress shirt and tie, or, because it’s totally unstructured, you really can just as easily rock it with a T-shirt — which, despite what everyone always says (and does), is not actually the case with all blazers.

We know you’re not necessarily going to win any cool points by shopping at Banana Republic, but if you’re on a budget and looking for a warm-weather blazer, you could do far worse than this lightweight linen number — it’ll take you safely from summer weddings to after-work drinks paired with some nice light denim. And obviously no one’s ever paid full-price for an item from Banana Republic, so neither should you. We wouldn’t touch it for any less than 30% off.

It is a well established fact that linen is an ideal material for warm weather. If there’s a problem with linen, though (aside from its tendency to wrinkle, which isn’t actually a problem but a low-key nice feature), it’s that you usually only find it in basic colors like navy and beige. Which is why we’re all in on this light pink version from Club Monaco. There’s a bit more structure to this one than some of the others on the list, so it’ll do that much better in a dressier scenario.

Todd Snyder has become one of the most reliable purveyors of relatively high-end menswear basics — everything from jeans and T-shirts to affordable suiting. And now you can add this perfect summer-weight blazer to that list as well. It features 55% wool and 45% linen for a surprisingly luxurious hand.

If there’s a cliché when it comes to classic summertime menswear, it would have to be the traditional blue-and-white striped seersucker suit, which, though we do have sort of a soft spot for it, can be kind of tough to pull off without looking like you’re trying out for the local barbershop quartet. So instead, consider this solid navy version from J. Press, which will get you all the benefits of the material (breathability, no creasing) but none of the hokiness.

In this era of all minimalist everything, something as simple and traditional as a madras sport coat like this one from Uncle Ralph himself has some real go to hell appeal to it. Pair it with some navy or khaki chinos and you’ll be the sharpest looking guy at the country club. Throw on some canvas sneakers instead of dress shoes or your trusty Sperrys and you’ll hit an entirely different note.

An upscale take on an absolute classic. If you’re the type of guy who wears suits to work and you expect you could get a lot of use out of a linen suit, we say go for the trousers as well.

For the guy who’s looking to make just a little bit of a splash without going full-on “Look at me,” green houndstooth is a pretty good option, especially in the crisp, slim silhouette Suit Supply is known for.

For the guy who wants to make a bit of a splash and is perfectly fine screaming, “Look at me!” If you’re gonna go with something as attention-grabbing as a double-breasted blazer in the dead of summer, you might as well make that shit yellow, right?

Depending where you fall on the spectrum of peacockiness, this option from Reiss could be a goldilocks item for a lot of men, as it combines more conservative elements (a one-button closure and a slim but not overly skinny cut) with some showier ones (peak lapels, a cool, retro-inspired color). You’re gonna want to skip this one if you’re planning on a wearing a pair of relaxed chinos, but if you’ve got some tailored dress pants and an elegant pair of loafers at the ready? Well then by all means.