It ain't magic. It's science. 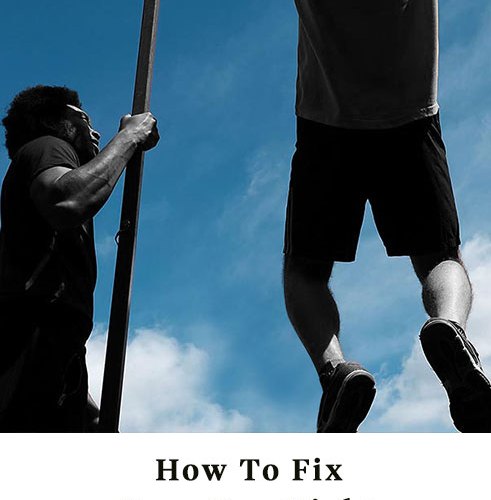 In recent years, fitness has returned to the forest floor. The creator of Raw Functional Training, Da Rulk, a tornado of a trainer who conditions first responders, ocean safety teams and special forces personnel, has championed the effort. His moves occur low to the ground, and they’re half legs, half grimaces: think bear-crabs, duck walks, and bunny hops.

The larger concepts, though, have gone mainstream. It’s likely that a first-year trainer at your local gym could coach you toward those same benefits. Just because we brainstormed our way out of the food chain doesn’t mean we shouldn’t still roll, jump and run around like the cousins we left behind in the jungle or savannah. Squatted, lateral movements that encourage flexibility and engage the core are functional antidotes to slumping over the computer and slouching on the couch.

Few trainers, though, may be as likely to preach fitness that occurs above — in the trees. Our closest relatives in the animal kingdom (chimpanzees, gibbons, gorillas, and orangutans), all practice something called brachiation, or arboreal locomotion. It means arm swinging, essentially, and it looks like this:

According to Dr. John M. Kirsch, a board-certified orthopedic surgeon who wrote a book efficiently titled Shoulder Pain?, human beings still possess a similar shoulder structure to those of apes. So although we said an informal goodbye to hanging from trees a decent 30,000 years ago, our shoulders are still built to hang. As kids, we oblige — I spent entire summers swinging on the monkey bars — but “play” screeches to a halt as we grow older, and the shoulders steadily weaken and grow more prone to injury.

Also not helping? I’m sure you’re sick of us, and everyone else saying it, but the day-to-day mores of your office workspace, and hunching over an iPhone, only serve to further lock up the shoulders, and everything else in the neighborhood, especially the neck and spine. Which is why everyone, and particularly aging adults, should be performing at least a minute of an ape-style “dead hang” each day. Execution is super simple. Using a sturdy pull-up bar (if at your house, great; if at the park, might want to wear a pair of gloves), hop up and hang, your hands about shoulder’s-width apart, grip facing away from you. You should let your shoulders creep up naturally past your ears, and your chin should be tucked down near your chest.

At first, it’ll feel nice to engage with a pull-up bar and not have to do pull-ups, which are the single most intimidating exercise around. But that happy moment will be promptly replaced by searing pain. Aimless hanging from a bar is a startling sensation. It’s hell on your hands and forearms, and the longer you go, you’re going to feel like your shoulders are ripping from their sockets. The good news? They’re not. As Dr. Kirsch sums up, “Paradoxically, the pain experienced while hanging from a bar will not injure the shoulder, but must be accepted.”

In a way, the boring effectiveness of simply hanging from a bar mimics the boring ways in which humans slowly break down their bodies. Certain moves don’t look like much, but they can change the layout and function of your body, for better or for worse. A dead hang will help reverse the tide on a lot of that worse. It actively decompresses the spine, stretches out the shoulders, and builds strength in the upper back and shoulders. Along the way, as hard as this may be to imagine, it will also reduce overall pain in the shoulders. Take a look at some of Dr. Kirsch’s reviews (they’re glowing, and seem to comprise a lot of giddy, newly-pain-free British men, for some reason) or check out a YouTube video, like the one below from trainer Joe DeFranco:

I recently tried the hang myself, as a way to open up my shoulders pre- and post-workout. I tried to hang for a full minute, but couldn’t last past 51 seconds. At a certain point, you’re basically self-administering Game of Thrones torture. Hitting an exact number, though, isn’t really the point. This is the rare form of upper-body exercise that shouldn’t require gutted-out bellows. Pick a song, take some deep breaths while up there, and try to relax into it. If you can hit 30 seconds, great. The goal should be three to five minutes of hanging over the course of a day. If you can stick to it, you’ll not only drastically increase mobility in your shoulders, but you’ll probably pick up some Popeye forearms by accident, too. Kitchen jars won’t stand a chance.

I Idled in an Electric Car for 12 Hours in the Freezing Cold to See What Would Happen
25 Years Later, Reflecting on the Genius of “Trainspotting”
Review: WhistlePig Just Launched a Booze-Free Aged Rye
Shop Hyperlite Mountain Gear's Only Sitewide Sale of the Year
An Italian Breadstick Fit for a 17th Century European Nobleman
The 5 Biggest Takeaways From Milan's Fashion Week
Rooftop Tents Are Suddenly Cool. You Still Shouldn't Buy One.
J.Crew's Newest Collab Is a Necessity for Hiking and Streetwear Enthusiasts Alike — And It's for a Good Cause
Snag Some Deeply Discounted Cashmere at Naadam's Archive Sale