13 Fitness Experiences Worth Traveling for in 2020

We know that vacations are good for mental health. Why not use one to boost your physical health, too? 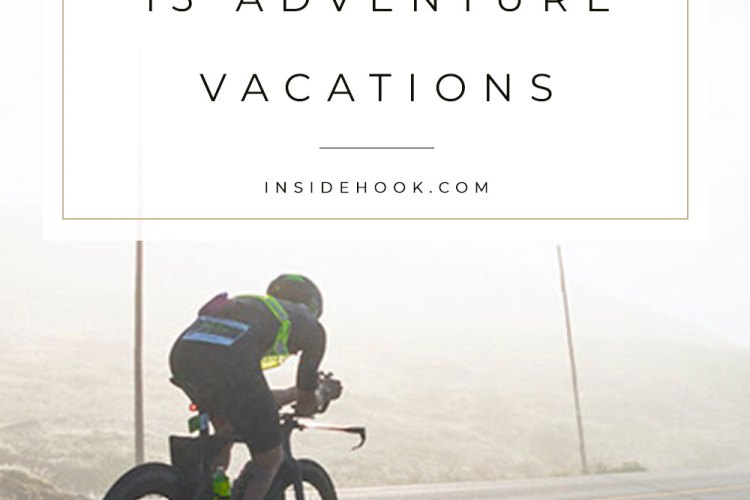 Last year, we asked you to rethink your PTO strategy heading into 2020. Which is to say … actually have one.

And that’s before you get to the very real and tangible benefits of planning and going on a vacation: It’s good for the soul and even better for the brain, with a proven capability to reduce stress hormones, protect against depression and foster a sustainable work-life balance.

Traditionally, though, physical health has taken a backseat to mental health as the main beneficiary on vacations. Sure, resorts always have pools and tennis courts, but for most, an exotic trip abroad is more of an exercise in excess than, you know … actual exercise. But with humans more mindful of how they treat their bodies than ever (“wellness” now constitutes a $4.2 trillion global industry), that’s changing.

According to the 2018 Global Wellness Economy Monitor, the wellness travel market expanded 6.5% from 2015 to 2017. In that two-year span, travelers took 139 million more trips centered around fitness. And it’s not all yoga retreats and meditative journeys intended to restore a sense of calm to an otherwise busy life: wellness travel also includes a host of more adrenaline-centric experiences, from triathlons through Norwegian fjords to Red Bull-hosted sprints up near-vertical inclines. At the same time, there are coed trips to surf and drink beer in Central America, cyclist tours with a personally cooked farm-to-table meal at the close of each day, and strange races where elementary schoolers and senior citizens compete to get to the finish line first. (We can explain.)

We’ve rounded up those experiences and a bunch of others below, for a total of 13 fitness experiences worth traveling for in 2020. These trips do double duty: you’ll get all those wonderful mental benefits, but come home a little stronger, fitter, faster, trimmer and [insert body goal here], too.

The skinny: The second-largest marathon in France follows the Mediterranean coastline from Nice to Cannes. It’s blissfully flat, and incredibly popular; when the event debuted in 2008, it immediately set world records in participation for a marathon debut. You can run the whole stretch yourself, or enter as a relay. They take pairs and six-person teams.
The dates: November 8

The skinny: It’s right there in the name. Coed-spring-break vibes aside (lots of graphic tank tops on these trips), this tour operator is entering its sixth year, and stages 12 trips per annum, including expeditions to Greece, Croatia, and Iceland. Expect beach bootcamps, group runs, SUP sessions and drinks at the end of each day.
The dates: Depends. The earliest trip is February 16-23, to the Philippines, but the trips keep coming basically every month. Check out the full list here.

The skinny: A chest hair-stimulating triathlon through the world’s fourth largest fjord. Founder Hårek Stranheim apparently endeavored to design the planet’s most difficult triathlon — mission accomplished. Participants start in the loading bay of a car ferry and finish 5,000 meters above sea level, on a mountain. You’ll have to settle for spectating in 2020, but keep an eye on registration for next year here. Note: this is part of the XTRI World Tour, which also includes extreme triathlons in the Scottish Highlands and the Moroccan desert.
The dates: August 1

The skinny: No more proclamations from the couch — here’s your chance to actually prove you could handle the American Ninja Warrior course. For two days at the end of March, sections of the official course from the show will be open to the public. It’s part of an all-access event hosted on the Universal Studios Hollywood backlot called Peacock Live! There’s a ton of other stuff to do with the kids, too.
The dates: March 28-29

The skinny: Mile High Run Club is a Manhattan running house with multiple studios throughout the city and a bevy of stud coaches. Its classes feature treadmill work in neon-lit rooms with loud music, plus road and track work in preparation for New York marathons and halfs. In line with its communal vibe, the club also has a travel branch called “Mile High Wings,” which takes periodic trips throughout the year. The first such sojourn this year is up to The Brampton, a lodge on the Hudson not far from Lake George.
The dates: January 18-20

The skinny: A 400-meter run, quick refresher, is one lap around the track at your local high school. It’s a very manageable distance, even if you haven’t run in a couple years. Then Red Bull came along. The adrenaline-obsessed brand has been hosting a 400-meter “race” for a few years now in various mountainous towns; participants start by jogging up a hill, and finish by heaving organs on a near-vertical incline. This year’s event is in Finland.
The dates: May 9

The skinny: Vancouver going full Vancouver. Lululemon’s annual half marathon in its very livable hometown is as much about harbor-side yoga sessions and sunset dance parties as the actual 13.1. Come for the full weekend and expect lots of swag, beautiful people and a fairly low-stakes race (last year’s race footage showcases mustached men dribbling basketballs).
The dates: August 13-15, the race itself is on the 15th.

The skinny: Every year, the world’s best (so, most unbearable) CrossFitters descend on Madison, Wisconsin, for the CrossFit Games. It’s a lot of top-notch grunting and video game-level deadlift numbers, and all the rest of us can do is spectate. Our take? Skip it, and instead turn to the Festivus Games, which eschew the firebreathers and want novices. The event takes place in 100 different gyms across 47 states, all on the same day. Find your closest host here, and study the WODs here, if you want — the gyms won’t care either way.
The dates: April 18

The skinny: A seminal yoga text dictates that one of the practice’s greatest obstacles is “adhering too strictly to rules.” This cheeky yoga retreat operator took that tenet to heart, and revels in causing a bit of mischief. Since 2013, Yoga for Bad People has rolled out mats all over the world, from Cuba to Montana to Ireland. There are two sessions a day, plus daily meditations, but they’re often accompanied by Outkast, and you’re never more than a few hours from jumping in the ocean or heading to a wine tasting. The first event this year is in Jose Ignacio, “The Hamptons of Uruguay.”
The dates: February 16-22 for Uruguay. Check here for dates on other retreats coming up this year.

The skinny: According to Runner’s World, the best relay race on the planet. Here’s how it works: teams of 12 run from Oregon’s Mt. Hood to the coastal town of Seaside. There’s a 36-hour time-limit and each teammate can expect to run about 17 of the total 197 miles (though not consecutively, in stints of three). This is an outrageously gorgeous part of the country to run in, and obviously an American long-distance Mecca. (Sure enough, Nike is a sponsor.) Also part of the fun? Off-duty participants drive painted vans from checkpoint to checkpoint to support their teammates.
The dates: August 28-29

The skinny: Long-distance cyclists in the United Kingdom have long had LEJOG, an 874-mile trip from Land’s End, at the very southwestern tip of England, to John o’ Groats, the very northeastern tip of Scotland. MizMal is Ireland’s answer. A former IT consultant founded Wild Atlantic Cycling in 2015, and the tour group brings cyclists from the southwestern Mizen Head in County Cork to the northwestern Malin Head in County Donegal. It takes 7-12 days (based on what speed group you sign up for) and makes pitstops at the Cliffs of Moher, Duncruaire Castle, Connemara and more than a few pubs for fresh pints of Guinness.
The dates: The first seven-day trip this year is May 23-30. The trips are all clustered from May to September, check the full list here.

The skinny: America’s oldest race, and what a bizarre one it is. This seven-and-a-half-miler in California’s Mill Valley (just over the Golden Gate Bridge) celebrates its 110th birthday this year, and it still honors some strange, exciting traditions, like A) handicapping the race by age and gender (slower runners can get up to a 25-minute head-start) and B) allowing runners to take alternate routes and shortcuts on their way down the mountain. This bizarre format allows for some unexpected winners; men and women as old as 72 have won the race, but then, so has a third grader.
The dates: June 14

Why Do I Feel So Weird About Dave Grohl, Who Isn’t Jewish, Doing Annual “Hanukkah Sessions”?

Review: The New Jack Daniel’s Release Comes With an Actual Warning
The Cola-Flavored Beer From Goose Island Is Surprisingly Great
Why Do I Feel So Weird About Dave Grohl, Who Isn’t Jewish, Doing Annual “Hanukkah Sessions”?
Is the "Vertical Kilometer" the World's Toughest Race?
How a Nepali Climber Shattered the Record for Summiting the World’s 14 Tallest Mountains
What We Learned From Watching “The Beatles: Get Back”

What We Learned From Watching “The Beatles: Get Back”
Neil Patrick Harris on the Art of Magical Holiday Gifting
How Musicians Train Their Bodies to Get Into “Concert Shape”
How to Bet Week 13's Best NFL Games, According to the Pros