Roberta's, Emily, Emmett's and other places are known for their pies, but seriously consider the burger 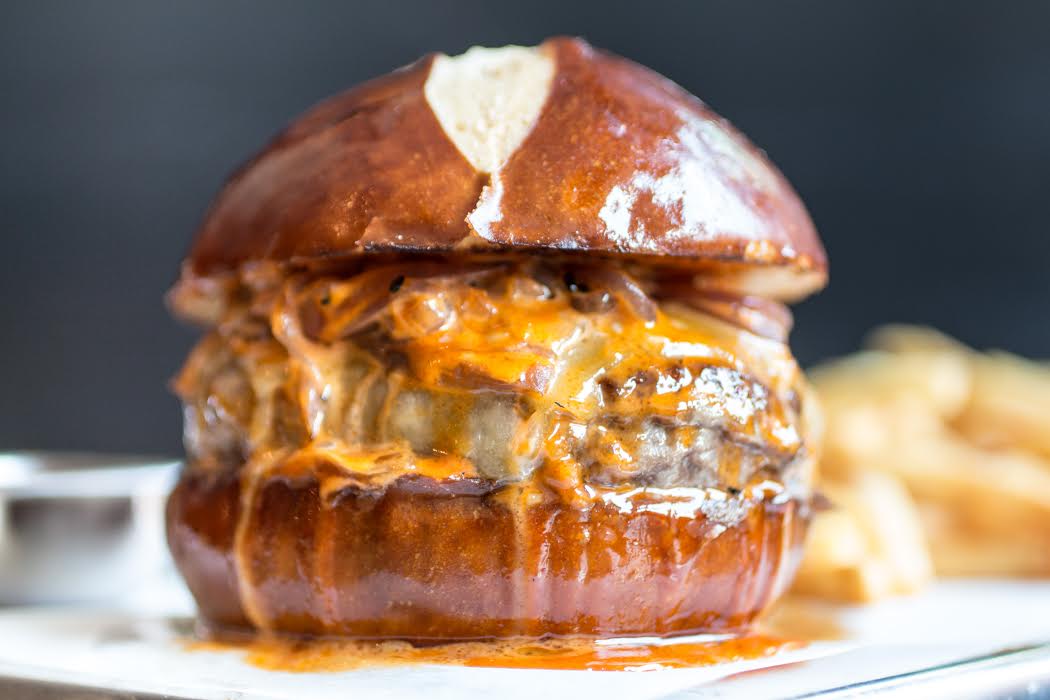 About a year into operating Emily, a Clinton Hill pizzeria that Matthew Hyland founded with his wife Emily in 2014, he started getting a craving for a hamburger. “Emily and I were working seven days a week and we were always eating at the restaurant. I was eating pizza all the time and one night I just wanted a burger and a beer,” Hyland said. “So I made one.”

Emily wasn’t just a local pizzeria, it was a restaurant that was already getting a lot of attention from the food media thanks to its excellent pizza served on no-frills metal trays and sides like the fried Brussels sprouts, which landed on a Grub Street list in the first few months of its opening. So when Hyland added the burger as a special item on the menu, diners took note, and word spread quickly.

The burger that Hyland made that night evolved into what’s on the menu now: a dry-aged patty covered in year-old Vermont cheddar and caramelized onions and served on a pretzel bun. Something that “shouldn’t work, but it does,” as Hyland put it. At first, they sold maybe one or two a night, but word got out in the neighborhood that the burger was exceptional, and orders picked up. Then came a wave of positive reviews (New York magazine proclaimed the burger one of the best in the city), and before he knew it, Hyland had a line out the door of customers clamoring for a burger, which, even priced at $28, sold out every night.

“We weren’t built for burgers, we were built for pizza,” Hyland says. “It was an unexpected detour where my career went.”

Since then, Hyland and Emily have opened two more pizza-centric restaurants, in the West Village and in Williamsburg, both with burgers on the menu. While the pies like their vodka sauce one at Emily and their Detroit-style ones at Emmy Squared will always be at the heart of the restaurant, Emily, and a number of other big-name, new-school pizza joints in NYC, have started to become go-to destinations for burger lovers.

Maybe the first of this genre of pizza-famous but burger-excellent places is Roberta’s, the Bushwick restaurant that opened in 2007 and swiftly became a symbol of Brooklyn aughts culture and a staple of its cuisine. Though Roberta’s is best known for inventive pizzas like the Bee Sting, a pie covered in a delicate layer of soppressata and spicy honey, and The Speckenwolf, dotted with mushrooms and speck, the menu has always had a lot more range than your average slice spot, including an excellent cheeseburger that often flies under the radar, made from dry-aged beef and served with American cheese on top and condiments on the side. Mark Rosati, head chef for Shake Shack, described it as “masterful,” and Serious Eats founder Ed Levine wrote a post proclaiming that it might be the best burger in New York City for the price.

Roberta’s was an early adapter when it came to pizza places serving up elevated burgers, but since then, if you’re venturing out to a certain kind of non-traditional New York pizza restaurant — the kind where you’re equally likely to be intrigued by an inventive salad as a slice of pepperoni, and where the non-pizza offerings aren’t an afterthought — there’s a decent chance that you’ll also find a good burger on the menu.

Emily’s less hyped but still locally beloved neighbor in Clinton Hill, Speedy Romeo, is another example. It’s a place that acts as a second living room to many Broooklynites and at first glance, you might think it’s just another New York pizza place. But dig a little deeper and you’ll notice that a good portion of the menu is cooked in the wood-burning oven. And yes, Speedy Romeo has a great burger, one that’s topped with provel, their special “Speedy sauce” and potato chips.

Emmett’s, a Chicago-style pizza tavern in Greenwich Village that opened in 2013, is another example of a pizza-focused place that also consistently has its burger listed among the best in the city. Unlike Emily, a burger was always a part of Emmett’s menu thanks to the vision that founder Emmett Burke had for his restaurant.

Burke spent the summer before his opening tasting different cuts of meat and figuring out the mechanics of making the kind of burger that he really wanted to eat. “I always knew I wanted to open a pizza place. I dreamed about it for 15 years. And as the opening got closer, I thought, every good neighborhood spot should have a burger,” Burke says.

That’s the best through line for why all these pizza spots are serving up burgers that are worth your time. It’s because they aren’t pizzerias in the sense of an old school place like Di Fara’s, or high-volume slice joints or even, really, Italian-American restaurants in general. Emily’s, Roberta’s, Speedy Romeo and Emmett’s are all neighborhood joints to some extent, and the neighborhood cuisine of New York City is pizza. These restaurants are all ones that aren’t invested in the high art of pizza-making as defined by the Italian DOP, but in the food culture of New York, where pizza is plentiful.  Including a burger on the menu of a local hangout feels like a much more natural move. Plus, New York City is a place with a high concentration of talent and low margins for error, in terms of items on the menu. Just putting a burger on the menu won’t necessarily cut it — if you add it on and it’s in the $12-$20 range, it had better be good.

Burke echoes that approach at Emmett’s. “We’re not trying to be a high-end burger, like at Minetta Tavern, that’s a different game,” Burke says. “People appreciate different burgers for different occasions. And this one, I wanted a classic neighborhood burger, an everyday item.”

So next time you’re at your usual neighborhood pizza sit-down spot, take a chance on the burger, provided that your neighborhood is in New York.