In what is the basketball equivalent to being a made man in the mob, NBA MVP Giannis Antetokounmpo has just unveiled his first signature shoe with Nike.

Dubbed the Air Zoom Freak 1, the shoe features double-stacked cushioning under the heel, multidirectional traction on the rubber outsole, a soft foam midsole and a padded collar to help lock in the heel.

“He’s using space with great efficiency,” Klein said. “He uses length to take defender’s off of their position. In a euro step, for example, he can pull a defender one way and because his left step — the lethal step — is so long, he cuts a huge, almost two-step, advantage.” 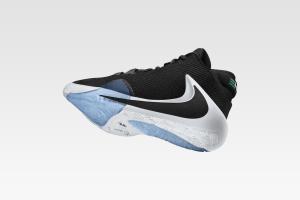 The $120 Air Zoom Freak 1 (and Antetokounmpo’s initial apparel line) will be released on June 29. Both will bear a new signature logo which Nike created for Antetokounmpo that honors both Nigeria and Greece.

“To be honest with you, I never dreamed of having a signature shoe. Growing up, the goal was making the NBA; playing hard and helping your team win. This is a bonus,” Antetokounmpo said.

While in Athens to present his signature shoe, Antetokounmpo announced he will play for Greece at this year’s basketball World Cup in China.