It's a huge company that digs its own holes, but it has helped shape and change men's style over the last decade in immeasurable ways 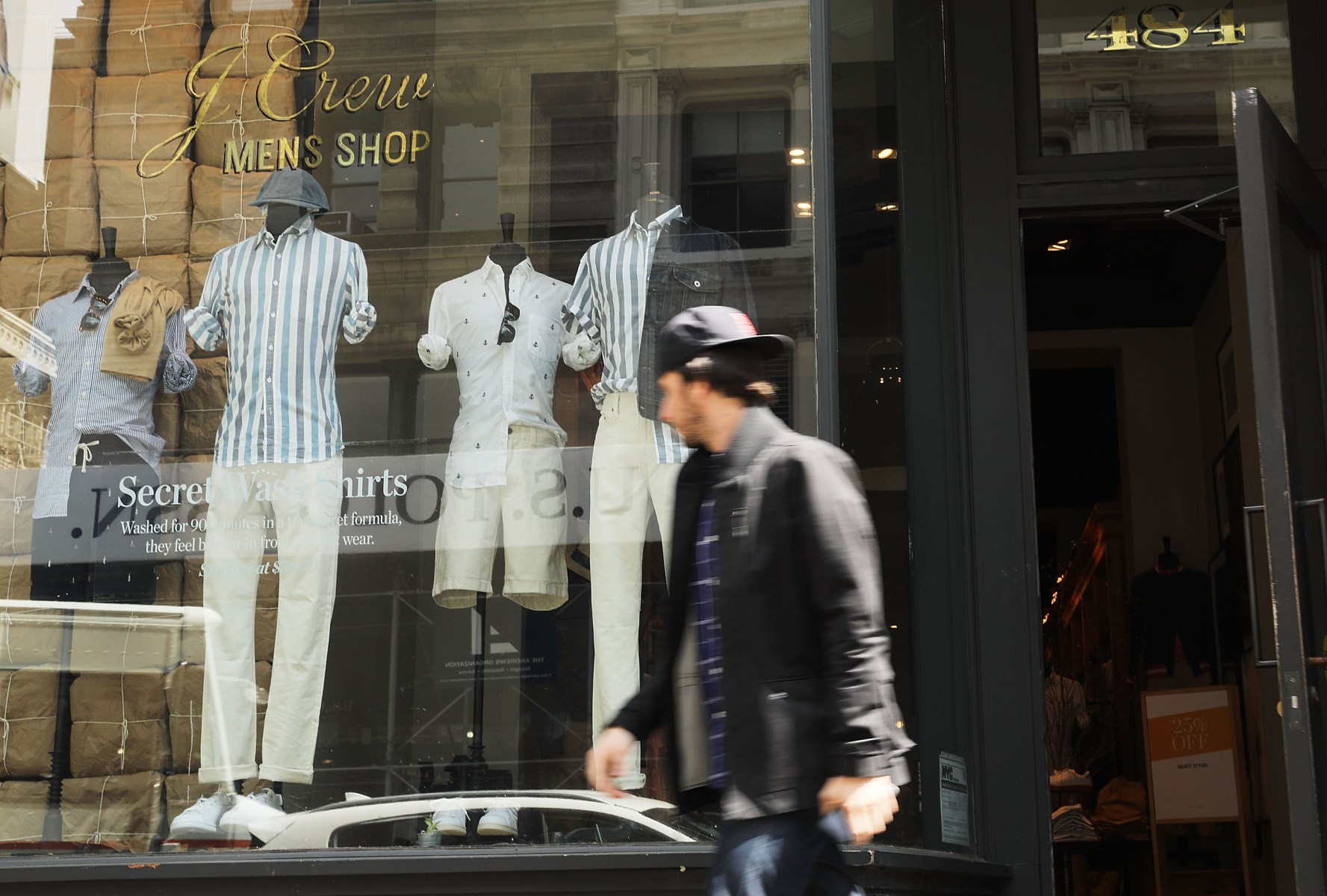 J.Crew has gone from menswear giant to lost in the woods (Photo by Spencer Platt/Getty Images)
Getty Images
By Jason Diamond / June 17, 2019 11:14 am

When J.Crew opened its fashionable Liquor Store location in an old bar in Manhattan’s Soho neighborhood back in 2008, it was sort of a huge deal. Mike Albo, writing for The New York Times, wrote about how he wished he had “married a loud, drunk banker” so he could buy things sold there, like the $800 raincoat or the $125 English wool pinstripe blazer.

Designed by Jack Spade founder Andy Spade, some might forget that the little shop that felt like a clubhouse was a real moment in menswear. Prep was back (just like it was in the ‘80s with Polo and Tommy, or the ‘90s with Abercrombie and Fitch, and just like it’s back today), men were deeply interested in the quality of what they wore (specifically heritage brands), and J.Crew was the place for both novices who thought Pitti Uomo was an Italian sports car, and the guys who kept up on the latest news and trends thanks to the emerging menswear blog movement spearheaded by sites like A Continuous Lean and Unabashedly Prep.

Things, of course, change. J.Crew, once the toast of the fashion world, where an average guy could get outfitted like an above-average guy in off-that-rack suits that actually fit in styles that would normally cost them double, now looks to be a sinking ship. The company is teetering towards fashion purgatory: irrelevance.

At least that’s the picture painted in a recent Vanity Fair article that examines the company’s woes in the post-Jenna Lyons and Mickey Drexler era. The company, which rode a wave of profits after a decade of record sales, lost the high-profile duo credited with that success in 2017, and recently reported a net income loss of $120 million and $2 billion in debt that same year.

As Maggie Bullock writes in the article, “as anyone who has entered a J.Crew store recently can tell you — and as many insiders asserted in interviews — the only discernible feeling the company has evoked in recent months is ennui.”

For now, J.Crew’s fortunes seem to lie with 36-year-old designer Chris Benz, who spent the past four years heading up Bill Blass. Over a decade ago, in 2006, Benz spent time working with Drexler and Lyons at J.Crew, and while Benz has reportedly inspired some new energy in the company, as Bullock points out, he’s largely untested.

All this begs the question: What is the future of J.Crew and what does it mean for menswear? The little time between Lyons and Drexler leaving saw the company tone things down a little. As Bullock writes, Drexler’s predecessor, Jim Brett, “also purposely swerved away from J.Crew’s prescriptive how-to style. Circa 2018, dictating how customers ‘should’ wear their clothes felt undemocratic. Preaching about provenance felt self-aggrandizing at best.”

Benz, on the other hand, does feel fun. A little less corporate, a big fan of color and somebody who brings a lot of fashion world goodwill to the table will help the brand in the short-term. But, as Bullock writes, “his purview is far narrower than Lyons’s was, and much is presumably resting on the incoming executive ranks.”

But Benz is also walking into something that Drexler and Lyons didn’t have to contend with in a menswear world that didn’t have Instagram influencers with millions of followers: competition, especially online. While fashion has evolved in the last decade (Barbour jackets, Nike Killshots and other Dad Canon staples are great, but people want stuff by Virgil Abloh these days, maybe not something that Steve Bannon would wear), J.Crew hasn’t been able to catch up. The brand’s identity is in a serious moment of crisis. It was hot just a few years ago, but now feels decidedly less so. J.Crew is reliable, sure, but a lot of places can give you that. You can get a pair of chinos for the office almost anywhere now.

When Drexler and Lyons took over, the field was smaller. Hardly anybody stateside had heard of Hypebeast, Mr. Porter was a few years away from being launched and The Rake was just a handsome magazine, not a competitor in the sales world. J.Crew helped people who might not otherwise care to refine their style, upgrade their shirts and sweaters, and in the process, help to spark a new, wider interest in menswear.

Ultimately where the J.Crew problem lies is legitimacy. The company started in 1983, when The Official Preppy Handbook was a bestseller and founder Arthur Cinader believed — as Bullock puts it in the Vanity Fair article — that the company could “sell the Ralph Lauren look at half the price.”

The difference was, of course, that Ralph Lauren was legit at that point. Everybody knew the brand, but most of all, they knew the lifestyle. It wasn’t as old as a company like Brooks Brothers, the brand that Lauren himself graduated from before starting his own label. J.Crew was an interloper, a brand trying to pass itself off as traditional and cool without one bit of tradition or history behind it.

Now there is some history. Enough of it, at least. There’s no Leon Leonwood Bean or Ralph Lauren figurehead or anything that ties the brand to a particularly romantic time or place. Personally speaking, as someone who still buys J.Crew clothes from time to time but has forsaken the brand’s white oxfords that I used to buy in bulk until they started falling apart in under a year, I liked that J.Crew was reliable. I was already an educated buyer when Drexler and Lyons moved in, but walking into the stores or looking at the catalogues kept me informed as to what other people were wearing.

Style is extremely personal, but what’s popular or trendy at the moment is important information to know. And, yes, when I saw certain cuts or takes on items of clothing I loved showing up in photos from the company’s Fashion Week shows, I was a little upset, feeling like all the work I’d done to curate my specific look had found its way to the masses. But you can’t really feel that way in the 21st century. Everything is online. It’s all right there for people to discover. J.Crew, to its credit, understood that and utilized the web early on, obviously looking at the cult menswear magazines and Blogspot blogs for inspiration.

Overall, I’ve always thought of J.Crew’s ascension as a good thing. A rallying cry against stuff that doesn’t fit right and boring clothes that wear the person more than the other way around. Do you remember how guys were dressing right before Drexler and Lyons took over? It was a dark time filled with boot-cut jeans and popped collars. J.Crew brought better clothes to people who might have otherwise just grabbed whatever looked appropriate.

It’s a corporation, sure. It does sort of parade around as a heritage brand of sorts, even though it’s not even 40 years old. But J.Crew has served a greater purpose than just acting as a place to buy and sell clothes: over the last decade, it taught more American men how to dress better, to tuck in their shirts, to own a blazer or two, and to strive to put on something that you feel you look good in. Hopefully there will always be room for something like that, and hopefully as the company moves forward it keeps that very recent bit of history in mind, and uses it as guidance. It’s why in the grand scheme of things, J.Crew still matters.