The Rivalry That Saved the NBA Began During March Madness: Magic v. Bird

On March 26, 1979, Larry Bird and Magic Johnson met in the NCAA tournament finale.

In 34 games during the 1979 NCAA season, Indiana State and Larry Bird lost just a single time.

On March 26 of that year, it was a bit of Magic that did them in.

Magic Johnson and the Michigan State Spartans defeated Bird and the ISU Sycamores in the 1979 NCAA Championship game by a final margin of 75‐64, kicking off a rivalry between the two players which would extend into the NBA. 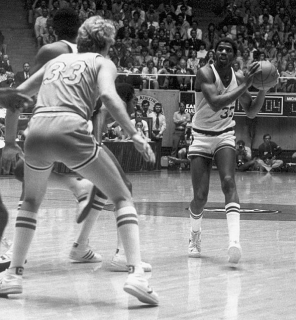 In the game itself, Johnson was spectacular scoring 24 points with seven rebounds and five assists while shooting .533 from the field and .800 from the line across 35 minutes of play. Bird was no slouch himself with 19 points, 13 rebounds, two assists, five steals and a blocked shot while playing the entire 40 minutes of the contest.

Hyped as a matchup between city vs. country, black vs. white, style vs. substance, the game made Magic and Bird icons and drew a 24.1 Nielsen rating, a mark that still stands as a broadcast record for a college basketball game.

Even though it was the last either would play in college, the game also put the NCAA on the map on a national level and allowed the tournament to expand from 40 teams in 1979 to 48 in 1980 and then 64 teams five years later. TV rights fees of $5.2 million in 1979 also nearly doubled the next year season as well.

“The college game was already on the launching pad, and then Bird and Magic came along and pushed the button,” is how the late coach and commentator Al McGuire put it in When March Went Mad: The Game That Transformed Basketball.

Luckily for the struggling NBA, Johnson and Bird would move on to launch the pro game to new heights as well in the 1980s as their rivalry transitioned nearly seamlessly to the pros.

In the NBA, Bird swapped his blue Sycamores jersey for Celtic green and Magic traded his Spartan green and white in for Laker yellow and purple. With those two stars on their respective rosters, either the Celtics or Lakers would go on to play for the NBA title in every year of the 1980s.

In three of those years (1984, 1985 and 1987), the two teams played each other with the Celtics and Bird winning the first matchup and the Lakers and Magic winning the final two.

In the midst of that run of NBA Finals appearances, 1986, Converse got Bird and Magic to film a commercial which captured their different personas perfectly – and also led to the start of a cautious friendship.

But it was the rivalry, not the friendship, that captivated Americans and gave the NBA a pair of marketable stars for the first time since the league was able to market the matchup of Bill Russell and Wilt Chamberlain.

“With the NBA struggling for an identity, Bird and Magic gave the NBA star power,” according to ESPN’s Andy Katz. “The rivalry allowed the NBA to become a form of entertainment. The media loved the rivalry and the pair seemed to flourish in it, as well. They were loyal to their cities and their organizations, which played well across the nation. Neither player ever considered being traded and that allowed fans to root for teams they knew would mostly remain intact.”

As far as rivalries go, the one between Bird and Magic was one in the truest sense of the word. Though they were different players, they were equals as competitors and earned the accolades, and NBA titles, to match.

Here’s the tale of the tape between the two courtesy of Land Of Basketball. 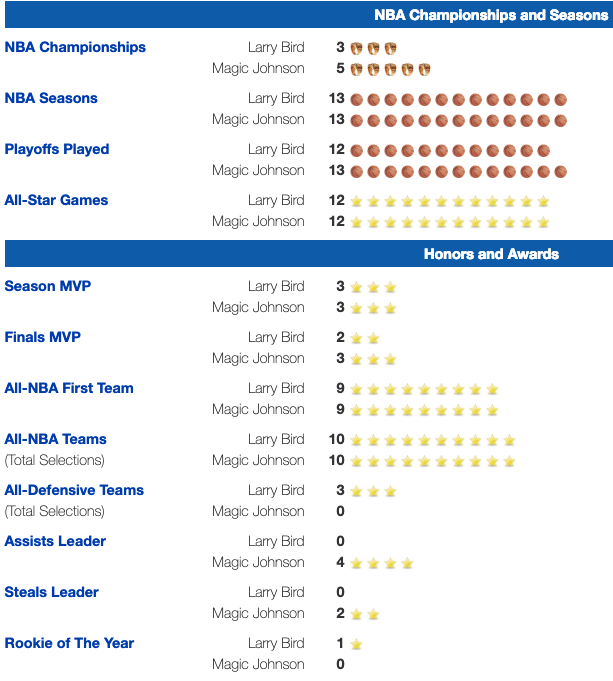 The tale of the tape between Magic Johnson and Larry Bird. (Land Of Basketball)

What the Land Of Basketball breakdown doesn’t list is that both players also won Olympic gold in 1992 as teammates, and co-captains, of the Dream Team.

And though that was a feather in the cap of the longtime rivals, it was clear at those games in Barcelona that the sport of basketball now belonged to younger stars like Michael Jordan, Charles Barkley and David Robinson. 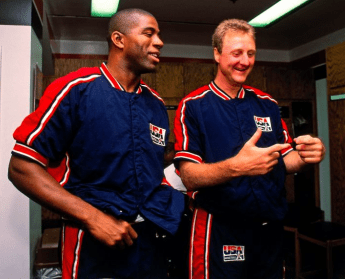 Johnson and Bird prepared for a game during the Basketball Tournament of Americas at The Rose Garden in 1992 in Oregon. (Andrew D. Bernstein/NBAE via Getty Images)

“The fact was that Magic and Bird, through their will to win, team play and the racial undertones of their rivalry, carried the NBA into the fat middle of the American mainstream in the mid-1980s,”Doug Merlino writes in The Crossover: A Brief History of Basketball and Race, from James Naismith to LeBron James. “By 1992, though, that was old news. The league was moving on.”

With their rivalry essentially over – Bird was forced to retire from the NBA thanks to back problems following the 1992 season and Johnson had (temporarily) retired before that same season following an HIV diagnosis – only the friendship remained.

That was never more evident than when the two would speak about each other in public.

If you’re a basketball fan, it’s inspiring to think the friendship demonstrated above was born of a rivalry sewn during the madness of March 30 years ago today.

The Chevrolet Corvette C4 Is a Classic Sports Car Steal
The Answers to All Your Not-So-Stupid Questions About Web 3.0
The Toyota GR86 Is One of the Last Affordable Sports Cars. Do You Care?
You Should Break Up With Your Partner This Summer. Just Trust Me.
The Best Places to Order Steak Online
Colin Kaepernick's Workout With Las Vegas Was a "Disaster," Ex-Raider Says

Meet the French Finance Bros Disrupting the Luxury Hotel Biz
10 Questions You’ve Always Wanted to Ask Someone in a Throuple
Enough With All the Multiverse Stories Already
Review: We Tested Indochino, the Popular Made-to-Measure Menswear Label
The Best Discounted Bathing Suits to Shop Right Now
The Best Places to Buy Prescription Glasses Online
Meet the Canadian Distillery Behind the World’s Best Rye
Inside Ardbeg Day, Where Scotch Is King and Tradition Is Moot
The Best Places to Order Steak Online

The Chevrolet Corvette C4 Is a Classic Sports Car Steal
The Answers to All Your Not-So-Stupid Questions About Web 3.0
The Toyota GR86 Is One of the Last Affordable Sports Cars. Do You Care?
You Should Break Up With Your Partner This Summer. Just Trust Me.
The Best Places to Order Steak Online