The NFL player has sat during the national anthem since last season.

Retired New York City Police Officer Frank Serpico, center, stands with other members of law enforcement during a rally to show support for Colin Kaepernick, Saturday, Aug. 19, 2017, in New York. Kaepernick, the former quarterback for the San Francisco 49ers, became a controversial figure last year after he refused to stand for the national anthem. He said it was a protest against oppression of black people. (AP Photo/Mary Altaffer)
By Matthew Reitman

An unlikely activist is receiving help from a surprising group.

New York City police officers held a rally Saturday to support Colin Kaepernick, the former San Francisco 49ers quarterback protesting against violence against minorities at the hands of police. Many feel his refusal to stand during the national anthem is unpatriotic or disrespectful to law enforcement drawn, while others praise his choice.

Retired and current police officers, about 80 in total, gathered in Brooklyn Bridge Park with t-shirts that read “#IMWITHKAP.” The rally organized by Sgt. Edwin Raymond who is part of a class-action lawsuit against the NYPD for prejudicial policing policies, the New York Times reports. 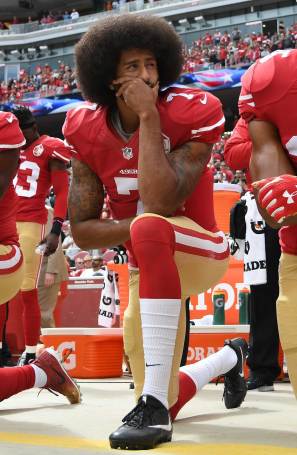 Colin Kaepernick #7 of the San Francisco 49ers kneels on the sideline during the anthem before the game against the Dallas Cowboys at Levi’s Stadium on October 2, 2016, in Santa Clara, California. (Thearon W. Henderson/Getty Images)

Kaepernick, who hasn’t been signed by an NFL team this season, decided to kneel during the national anthem last year in protest. His absence from a roster generates more buzz the closer the regular season gets.

New York City officials, like Councilman Jumaane D. Williams, likened tied the backlash against the quarterback’s protest to the racism supported by the white supremacists seen in Charlottesville last weekend, according to the New York Times. Williams was criticized for sitting during the national anthem before City Council meetings last year.