The Black Lives Matter activist announced Tuesday afternoon that he’s boycotting the NFL over what he called a league-wide lack of respect for black people. King, himself a longtime football fan, is taking his stance in the aftermath of the Seattle Seahawks decision not to sign free-agent quarterback Colin Kaepernick as a backup—despite much better career stats than the journeyman the team did sign, Austin Davis.

It seems possible that Kaepernick’s politics—including kneeling during the National Anthem during games last season to protest what he called police brutality towards the black community—has made him less appealing to NFL teams than players who were charged with domestic violence.

“I won’t be watching the NFL this year. I can’t, in good conscience, support this league, with many of its pro-Trump owners, as it blacklists my friend and brother Colin Kaepernick for taking a silent, peaceful stance against injustice and police brutality in America,” wrote King.

“It’s disgusting and has absolutely nothing to do with football and everything to do with penalizing a brilliant young man for the principled stance he took last season.” 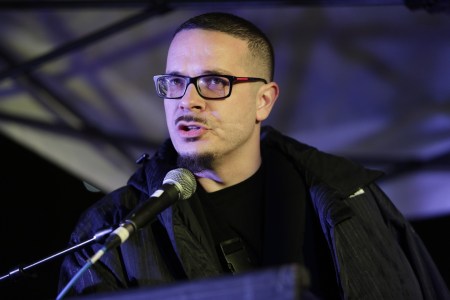 King, who had previously subscribed to the league television package to see all of the games, stopped short of advocating his legion of social media followers to join his boycott. But he did add that he couldn’t look his son in the eye if he continued to support the NFL.

“As a leader in the Black Lives Matter Movement, as a voice in the resistance to Donald Trump, and as a friend of Colin Kaepernick, I cannot, in good conscience, support the NFL any longer,” he wrote.