Think before you confirm that UberX
By Kayla Kibbe @Kay_Kibbe 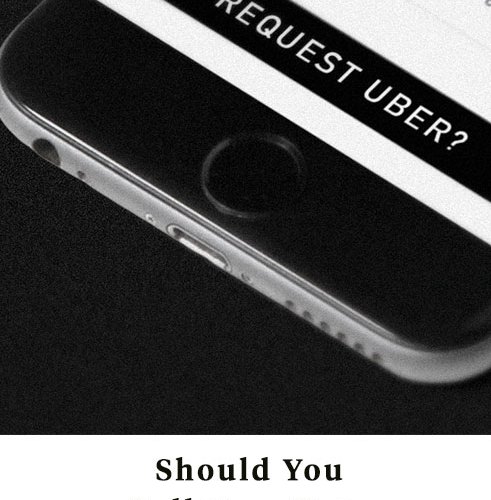 The Uber escorted me courtesy of the date with whom I’d spent the night before, and it was a generous offer of which I happily and gratefully took advantage.

Just the week before, however, I was stressing out about a first date with a man specifically because he’d offered to send an Uber to pick me up and bring me to the bar where we were supposed to meet.

But these advances have also introduced a new, increasingly nuanced kind of dating etiquette rife with new rules, occasional contradictions and unfamiliar lingo. Texting may be a great way to make plans, but if you don’t text to confirm those plans day-of, your date probably isn’t happening. Dogs may help you get more matches on dating apps, but they might also be ruining your sex life.

Likewise, calling your date an Uber is either the epitome of modern chivalry or red flag-worthy creepiness. So what’s a classy gent to do?

I’ve said it before and I’ll say it again: I cannot speak for all women, but I will anyway. (It is also worth noting that while I definitely cannot and will not pretend to speak for the LGBTQ community, much of the advice I’ve cobbled together from my own hetero experiences is probably also applicable in many non-hetero dynamics as well, because dating is dating, courtesy is courtesy, and being a jerk is being a jerk.)

That said, I’d like to preface this unofficial Uber dating etiquette guide with the qualifier that I can think of few circumstances in which the majority of women would necessarily expect their date to pay for their ride. Unlike the still-common (if oft-disputed) expectation that the man in a hetero dating scenario pays for drinks or dinner, offering to call your date an Uber/Lyft/Via/what have you is almost always considered a generous gesture rather than an expected matter of course. In general, if you’re offering to call your date an Uber, you’re landing somewhere above and beyond the call of normal gentlemanly duty.

Great, so how could calling your date an Uber possibly go wrong? Because not all women are the same and because context matters. While I can’t necessarily help you account for the vast nuances of womanhood, I can help you navigate context. In my experience, the biggest issue men may run into when it comes to the Uber gesture falls into the category of things generally well-meaning men do completely unwittingly and through little to no fault of their own that inadvertently make women feel unsafe. Such as….

Offering to call a stranger an Uber on the first date

This can be especially risky if the woman in question is someone from a dating app you’ve never met before. Meeting a stranger from the internet is a potentially sketchy enough undertaking as it is. Providing that stranger a pickup address they can presumably trace you back to (even if you’re smart enough not to give your actual home address) and trusting that Uber to actually bring you to the agreed upon meeting place instead of the dude’s apartment/the back alley where he plans to kill you is something many women are likely to struggle with.

But there’s no harm in just offering, right? She can always say no.

Yes, she can, and while most women will probably recognize the offer as a harmless and ultimately well-intentioned gesture, it could still raise a red flag for women who have had bad experiences in the past.

A few years ago a Tinder match offered to send an Uber to pick me up and bring me to a bar where we’d agreed to meet for our first date. When I got out of the Uber, the bar he’d mentioned was nowhere in sight. Instead, we were outside his apartment. Cue all of the red flags. I haven’t accepted a first-date Uber offer from a man since, and while I can usually acknowledge one as a presumably nice gesture, I always go into a first date a little more anxious after an unsolicited Uber offer wondering what his intentions may have been.

To summarize: Is it a nice gesture? Yes, definitely. But, as usual, a few creeps had to ruin it for the rest of us, and this is why we can’t have nice things. Best to just let her meet you there. You can always get her a ride home later that night (or the next morning). Which brings us to…

When to offer your date a ride home

Offering to get your date an Uber at the end of the night is generally safer, better received, and, in many contexts, I’d argue, even encouraged.

If you have the resources, sending a woman home in an Uber at the end of a date has a certain old-school, chivalrous air without the overt patriarchal overtones and misogynistic undertones that often accompany a lot of other “chivalrous” gestures today. Does this mean that all women will want or accept such a gesture? Nope! Some won’t! But unless you happen to already know that the woman in question is generally opposed to accepting these kinds of financially-loaded gestures (i.e. she didn’t want you to pay for her dinner, drinks, etc.), it probably can’t hurt to offer.

Meanwhile, in an era in which many people may expect a good date to end with sex, offering to send your date home in an Uber in lieu of asking her back to your place at the end of the night can be a nice way to convey to a woman you’re interested in and want to see again that you actually do just have an early meeting/want to take it slow/etc.

What if you already brought her back to your place?

Sex complicates things. But it shouldn’t. I once had to leave the apartment of a guy I was seeing and usually slept over with after a date because he had an early morning something or other. On my way out, he told me not to take the subway because it was late. When I told him I wasn’t interested in paying for an Uber, he told me that he wouldn’t call me one because it felt “hookerish” — this coming from a man who always paid for dates.

I didn’t mind — I’d been planning on taking the subway anyway. But it did strike me as odd that a man who had no problem regularly dropping hundreds on dinner or drinks before sex got squeamish about shelling out a few bucks for an Uber after the fact.

Again, while you’re never obligated or even necessarily expected to call an Uber for a date, being unwilling to after sex specifically because you just had sex not only draws an irrational connection between traditional dating behavior and sex work, but also reinforces some negative attitudes toward sex work that you may want to reevaluate.

In conclusion, sex shouldn’t influence whether or not you decide to call your date an Uber, and doing so will probably be especially appreciated if you’re kicking them out of your apartment shortly after having it.

If a woman ever declines your offer because she feels uncomfortable or unsafe (or really for any other reason — she doesn’t owe you one, after all), you cannot get mad and defensive because you were “just being nice.” Making a woman feel bad for rejecting your chivalrous gesture undoes literally all of the chivalry, and now you’re just a jerk. Yes, the internet has complicated dating etiquette somewhat, but the golden rule underlying almost all dating tips remains simple: Don’t be a jerk.