Visit these spots before the crowds arrive

There are few foods that provide as much joy as tacos, especially in Texas, where they aren’t just a meal but a way of life. Now, some of the state’s best taquerias are on the national stage thanks to the Netflix show Taco Chronicles.

Netflix canonized fine-dining and avant-garde restaurants in its Chef’s Table series, which paid homage to hard-to-access establishments and expensive tasting menus. Taco Chronicles, which debuted in 2019, charts a different course. The first two seasons covered the history and culture of different taco styles — including al pastor, carnitas, barbacoa and cochinita pibil — traveling to places like Mexico City and Michoacán to spotlight where they come from and the people who make them. But for the newly released third season, the show came stateside to see what’s going on across the border.

Taco Chronicles: Cross the Border is eight episodes, each featuring a different city, from New York and Chicago to Dallas and San Antonio.

“In this season, we were looking for cities with a story to tell,” says Hallie Davison, who serves as an executive producer for the show and also directed the Texas episodes. Naturally, you can’t have a show about tacos in the U.S. without spending time in our state. Major cities and border towns alike are dotted with simple taco stands, Tex-Mex joints, authentic Mexican restaurants and more opportunities to score a quick snack or a sit-down meal.

“Taco culture is strong in Dallas and San Antonio,” says Davison, who grew up in Texas. “Wherever you go in Texas, there’s an appreciation for a good tortilla, a well-seasoned pot of frijoles, meat cooked to perfection and salsa with a real kick. It’s so deeply ingrained in our culture, and it has been for centuries. Good taco culture will never thrive unless there are discerning taco consumers, and Texas has more and more of them.”

There are a lot of good tacos in Texas, but the show’s producers chose San Antonio because it’s the gateway to Mexico — it used to be Mexico — and the epicenter of Tex-Mex cuisine in the United States. Its taco culture has a deep history that respects traditions while blending the old guard with the new. And Davison says they were excited to feature Dallas because it’s a city for entrepreneurs with big ideas, and there’s a hungry, open-minded audience ready to embrace those ideas — or, in this case, tacos. 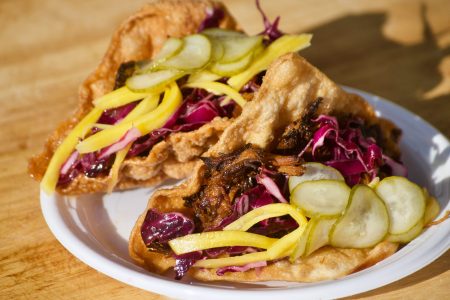 The show’s foray into Dallas led to Revolver Taco Lounge, where Regino Rojas makes some of the most exciting tacos in the state, including the fan-favorite octopus carnitas, which are bathed in an al pastor marinade before cooking. Maskaras Mexican Grill in Oak Cliff is known for its collection of lucha libre memorabilia, but also for its birria tacos served with a side of consomme, and its “drowned tacos,” which are served swimming in sauce.

At José, chef Anastacia Quinoñes serves a contemporary menu that highlights everything from ceviche to a grilled pork chop with fried plantains. But she says tacos help to define Mexican cuisine, so she’ll never create a menu without a taco on it, like the lobster taco with green mole she makes for the show. The episode ends with Zavala’s Barbecue in Grand Prairie, where Joe Zavala cooks perfectly smoked meats and incorporates brisket and pork shoulder into tacos.

In San Antonio, Taco Chronicles highlights Naco Mexican Eatery, a food truck situated at an old gas station that lures people in with breakfast tacos and other options featuring ingredients like chicharrones and huitlacoche. There’s a quick look at the Original Donut Shop, a long-standing institution that smartly complements its donuts business with breakfast tacos. Over at Con Huevos Tacos, tortillas are made fresh every day, and tacos are named for the important women in chef Hugo Garcia’s life. The Irma, named for his godmother, features eggs cooked in green salsa, with Oaxaca cheese, avocado and cilantro.

2M Smokehouse serves Tex Mex-style barbecue, with meat by the pound complemented by tacos. On the first Sunday of every month, the chefs make barbacoa, wrapping the meat in banana leaves and cooking it in the smoker for up to 10 hours before serving it with a side of fresh tortillas. El Pastor Es Mi Señor specializes in tacos al pastor and serves an authentic recreation of what you find in Mexico City. Thinly sliced pork and sirloin are stacked on vertical spits called trompos, falling from the chef’s knife onto awaiting tortillas.

This season also highlights other taco-obsessed cities, including Los Angeles, San Diego and Chicago, and each has its own related culture and cuisine. For example, Davison notes that in Chicago, where there’s a strong Mexican community, you see a lot of traditional regional tacos from Mexico. Families stay true to their recipes for goat birria, or carnitas, or Guerrero-style mole. “It’s all about holding on to tradition and preserving those flavors,” she says. But in Texas, taquerias are joined by a common thread: their proximity to Mexico.

“In Texas, you can appreciate the porousness of the border and how regional cooking styles sort of rub up against each other and produce beautiful things,” says Davison. She cites the brisket taco as a perfect example, since it combines the meat-smoking culture of Central Texas with the flour tortillas of Northern Mexico. “It’s perfection. And just like the best tacos, it’s worth a pilgrimage. It’s definitely going to taste better if you’re standing on Texas dirt when you eat it.”