When asked to describe the best day of the year, some would cite their birthday or Christmas. We, on the other hand, believe it’s the first day warm enough to suggest an imminent springtime. You can leave the jacket on the hook, grab an iced coffee, take a post-lunch constitutional to clear your head.

And as soon as 5 p.m. hits, it’s time to drink al fresco, surrounded by friends and no longer confined to the inside of a sticky bar. Perhaps the very best part is that it’s not yet hot enough to send beads of sweat down your back before you finish with your first round. In other words: it is perfection.

No one knows this better than the team behind the Michelin-honored Royal, whose soft opening of a new U-Street venture, Lulu’s Winegarden, celebrates its grand opening tomorrow.

“We all know that when the first day of spring hits in DC, patios fill up quickly, “ says co-owner Paul Carlson. “Washingtonians love savoring the sunshine after a long winter. We’re lucky that our space at Lulu’s has not one, but two patios: one in the front overlooking U Street, and a hidden gem of a bar out back with lots of greenery and fountains.”

The other half of the “we” that Paul is referring to is his wife, Brittany Carlson. The husband-and-wife team named the wine garden after their nine-month-old daughter, Lucilla.

“We want it to be a place where people can come with big groups for an afternoon of drinking, a friend for dinner, or even solo for a glass at the bar. Eating and drinking outdoors is special to us, because we both grew up in warm weather climates and have great memories of family dinners alfresco, and there’s just something so special about those summer nights outdoors.”

Another perk of Lulu’s is how laid back it is. Don’t expect a pretentious dinner menu or wine bottles that’ll set you back hundreds. The culinary program is helmed by The Royal’s Cable Smith, who created a playful, shareable menu perfect for a modern wine bar. Their reimagined, nostalgic snacks include things like French Onion Toast and a Chicken Corn Dog Bleu, made with a house chicken sausage wrapped in melted swiss, all fried and served alongside ham fat dijonnaise. The wine list comprises 50 bottles that all cost less than 50 bucks.

“We wanted people to order their wine based on what they like, and not based on price. Our goal was to make wine as easy and approachable as possible, so choosing to price everything at $49, we figured we would take one element out of the decision making process for them. You also get a much better value when you buy by the bottle — you get better quality wines and more options available.”

Just like at a beer garden, groups are welcome and most seating is communal. There are four large shared wood tables that seat up to 36, and built-in ice buckets to keep bottles chilled. There’s also a bar and ledge seating, along with plenty of standing room if you’re tired from sitting all day. The indoor space, which Carlson describes as an “indoor patio” because of its openness, will feature two large flatscreen TVs to air sporting events, debates and more. The space is also family-friendly and dogs are welcome on the front patio.

Also back open for the season is the popular Garden District, a crowd favorite for its low key vibe, good selection of beer and delicious barbecue.

Picks from their opening-day beer lineup include a porter from Old Ox Brewing in Virginia, a hazy IPA from Elder Pine Brewing in Gaithersburg, Maryland, and big-boy bottles of Sperryville’s Pen Druid Brewing Rarities. Look forward to menu items you already know and love, like pulled pork and barbecue brisket sandwiches as well as sides such as half-sour pickles and buttermilk onion rings.

A DC mainstay, this massive outdoor beer garden is known for being consistently crowded with a lively atmosphere and plenty of dogs. Adding to the fun is their insane happy hour special every Monday through Thursday: from 4-7 p.m., if you buy one beer, you get another for free.

Sure, it’s not the prettiest beer garden, but that’s not what you’re there for. You’re headed to Midlands for a good time, cheap beer and maybe a buffalo chicken hoagie. On weekends, get the party started early with some hair of the dog and an order of their breakfast tacos, which are served only on Saturday and Sunday until 3 p.m.

Those ready for a break from beer and wine will love Anxo, a local artisan cidery that also serves delicious Basque food at their outdoor-indoor restaurant and bar. Now that the weather is turning for the better, we suggest sitting outside on their charming patio to soak up the sun and order a tasting flight or two.

Their bottomless brunch on weekends is also an option: choose between endless booze, endless food or both depending on the desired outcome for your day. Personally, we wouldn’t pass up the opportunity for unlimited croquetas, pork sausage sliders and bravas poutine — all washed down with some cidermosas and plenty of coffee. 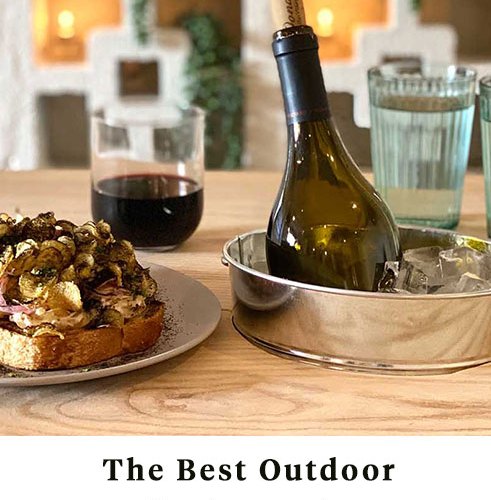