Why You Should Be Taking a Daily Constitutional

It's about time we talked afternoon ambles 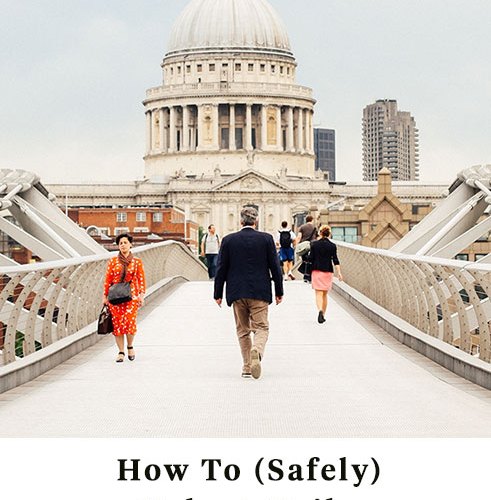 So long as you can maintain a distance of six or more feet from fellow pedestrians, leaving your home or apartment is now more crucial than ever. Below, some words on the history of the afternoon amble, what it does for the mind and body, and how to seamlessly ingratiate one into your routine.

In 1859, an essay called “Walking as an Exercise” was reprinted in The New England Farmer, a monthly, Boston-based journal dedicated to educating Americans on agriculture and general intelligence. In the essay, the writer argues: “If Americans would prescribe to themselves what John Bull calls his ‘constitutional walk,’ we should gain in strength of muscle, and banish or diminish the common complaint, dyspepsia.” John Bull, for those who need a refresher, is this jolly personification of the United Kingdom. Dyspepsia refers to indigestion.

We don’t need necessarily need antebellum pamphlets to remind us that walking is healthy, but it’s startling to consider how long that knowledge has been so common — and how little Americans seem to care. In 2019, the average American walks 5,900 steps a day, which is multiple miles below the recommended number of 10,000 steps. That’s a slight improvement from 2017, when Stanford University pegged the United States at 4,800 steps a day, and 30th out of 46 nations. The improvement could be chalked up to varying data sets, or the rise of Fitbits, but either way we could be doing better.

In fact, as I’m here to argue, we should all want to be doing better. The key phrase in that New England Farmer text, “constitutional,” might’ve been voguish to Americans in the 19th century, but it’s decidedly oldfangled today. I’d never heard the phrase in reference to a daily stroll, let alone formally considered implementing one for my own workday, until I heard it uttered by a coworker a few months ago. And despite the word’s semi-pompous verve, the etymology is simple enough. One’s “constitution” refers to his or her physical disposition. A regularly scheduled walk is performed for the betterment of that constitution.

This past June, I began a faithful route from InsideHook’s HQ in Midtown Manhattan seven blocks north into the southern maze of Central Park. I’d walk past hawking pedicabs and geriatric softball leagues and siblings scrambling over Manhattan schist before turning back towards the high rises, and completing the loop. It was 1.8 miles long, and could be done in 25 minutes if I was really motoring, but often I liked to find a bench in the sun for a beat, or watch a couple at-bats by the Heckscher Ballfields, or finish a chapter of my book that I’d started on the subway that morning.

After just one week of this routine, for which I generally carved out 45 minutes in the 2:00-4:00 range of the afternoon, I began to notice improvements in the “dusk” period of my working day, which takes place from 4:00-6:00. I spend that portion of the day working on larger, vaguer writing projects, which often require double or triple the creativity I might need for my morning assignments, and it was abundantly, almost immediately clear, that my constitutionals were helping me focus like never before. I had stopped looking out the window, feeling sorry that I was inside on a cloudless day. I would instead come back from my walks and sit down at my desk (albeit a little sweatier), ready to crank.

The benefits have extended past productivity. I’ve added, on average, 3,000 steps a day. It’s a mini bonus workout, which has come to compliment my morning workout. My mental health has benefitted, too; I feel calmer, and the day seems more manageable, following minutes of mindfulness in a place where work doesn’t exist. I get to feel the sun on my arms, and give my phone a break, and see dogs. Obviously, everyone’s work situation is different. But if you have the capability to incorporate a constitutional, or something like it, into your day-to-day, it’s a no-brainer. The research, thankfully, extends past my testimonial. Below, find a few science-backed explanations for why your afternoons could use an amble, plus some tips on how to get the most out of them. See you out there.

According to a 2015 study, which was published in the Scandinavian Journal of Medicine and Science in Sports, hour-to-hour moods can be improved with the help of an afternoon walk. Researchers at the University of Birmingham had two groups — walkers and non-walkers, both sedentary at the start of the study — record their attitudes in real time over the course of a day for several weeks. Walkers that took afternoon strolls were more enthusiastic and relaxed than non-walkers, and more likely to associate positive emotions with the days that they walked. In fact, they literally felt better in the hours after they walked, than they did earlier that morning. Unsurprisingly, a relaxed attitude is related to improvements in work productivity, which is exactly what I experienced in the early days of my constitutional. As for how this occurs physiologically? Bloodflow. Findings presented at Experimental Biology 2017 connected the impact of a foot pressing against to the ground to supplies of blood being sent directly to the brain. This boosts concentration in the short term, and your memory in the long term.

Easy on the Eyes

Americans stare at screens for at least seven hours a day. There are tricks out there now to ease the strain this puts on your eyes (they’re called blue light glasses) but it’s impossible to do a good job at work in 2019 while giving your eyes and brain the treatment they deserve. The light emitted by screens fiddles with circadian rhythms (you produce less melatonin, which means you’re far too alert before bed) and the manner in which we stare at them can lead to extensive to neck or back pain. A blissful aspect of the constitutional, then, is leaving your phone behind. Don’t bring it. If you’re checking emails while getting this 30-minute walk in, you’re missing the point. Crane your neck up, people-watch, look at the trees, let yourself be distracted by an airplane. Anything. It’s a welcome reprieve from being “on,” and that phone is waiting for you when you get back.

Faster walkers live longer. It’s true; “brisk walkers,” who walk at least 100 steps a minute, can expect to live 15-20 years longer. You can easily join their ranks. If you walk everyday, you will simply get better, and faster, at walking. Men haven’t historically given walking much credit as a form of exercise, but when considered within the sedentary framework of modern society, it of course counts. Look for ways to improve your posture while walking; walk with your back straight and engage your core. And try to recognize the aches and pains in your body, and make a point later in the day to stretch those areas, or rub down the tissue. When walking, don’t be afraid to test out uneven terrain, if you can find it nearby; it’ll confuse your body in a good way, and encourage better balance.

The beauty of the constitutional is that it’s entirely up to you. The time you go, the amount of time you commit to it … the point of this exercise is to make you feel good, to steal a little moment during a humdrum Tuesday to capture a semblance of control. So pay attention to what makes you happy, and keep at it. I’ve noticed I do best walking in green-space. That’s not exactly the hottest take — a Harvard study last year found nature can have a direct, positive affect on handling stress, anxiety and depression — and it is probably true for you too. Find a public park. It can even be a tiny pocket park. Bring a book and resolve to read one page, really closely. Or find somewhere to sit with your thoughts. On my constitutionals, breaks are encouraged.

It’s still the workday, so you don’t want to go gallivanting in your best pair of Oxfords. Have a pair of walking sneaks handy, which are subtle enough to avoid confused looks on the elevator back up to your desk. I recommend a dark pair of Allbirds. As for the aforementioned Fitbit, definitely get one. I like a wearable on the more spartan side. Way less distracting. Pick up Fitbit’s Inspire Fitness Tracker for $70, which’ll count steps, plus document mileage traveled and calories burned. And tell the time. That way you don’t walk in late to your afternoon meeting.