Sickening of more than 20 American officials at embassy part may be symptom of larger problem.

US Marines stand outside the Embassy of the United State of America in Havana, on February 21, 2018. (ADALBERTO ROQUE/AFP/Getty Images)
By Lee Ferran

Much attention may be on the resurgent Cold War climate between the U.S. and Russia, but another familiar U.S. foe is also making a concerning comeback — Cuba.

That’s at least according to William Evanina, the director of the National Counterintelligence and Security Center, the U.S. intelligence arm charged with advising and protecting the rest of the intelligence community from foreign espionage threats.

Evanina recently spoke with former CIA Acting Director Michael Morell about the countries he’s most concerned about and at first he listed the usual suspects: China (“they bring ungodly resources” to stealing information and tech), Russia (“more tactical” with the goal of “demoraliz[ing] democracy”), Iran (from a cyber perspective “very capable”) and North Korea (not great at human sources of information, but “very sophisticated” cyber capabilities).

When asked about other countries that make his list, Evanina answered with his surprise throwback.

“Number one would be Cuba,” Evanina said, referring to the island nation just over 100 miles southwest of the Florida Keys and the stage for some of the Cold War’s most hair-raising dramas.

“And I would say the island of Cuba because the capabilities as you know with the Cuban Intelligence Service for decades are silent but deadly.”

With the exception of strange apparent auditory attacks on U.S. officials in Cuba – and we’ll get to that in a bit – Cuba is discussed fair less often than the first four nations on that list. It got a scant mention in the U.S. intelligence community’s 2018 Worldwide Threat Assessment and wasn’t discussed at all in the accompanying Senate hearing.

But for some, like former State Department counterintelligence officer Fred Burton, the threat has never left. In 2015, as the U.S. and Cuba cautiously edged towards more cordial relations, Burton wrote that a newly re-opened U.S. embassy in Havana would “make the United States much more vulnerable to monitoring and infiltration by Cuban intelligence agencies. And today foreign spies pose as real and immediate threat to U.S. interests as they did during the Cold War.”

Burton, now chief security officer at the private intelligence firm Stratfor, wrote that during the Cold War the U.S. was so focused on Soviet intelligence capabilities that they underestimated Cuba’s own threat.

“We believed Cuba’s Directorate of Intelligence, trained by Moscow though it may have been, was significantly less effective than Russia’s KGB,” he wrote, before identifying Americans that were successfully recruited by Cuba and served secretly in the U.S. for years before being caught. Burton’s piece was a warning, concluding by saying that even if the U.S. and Cuba were growing closer, “there is no such thing as a friendly intelligence service.” 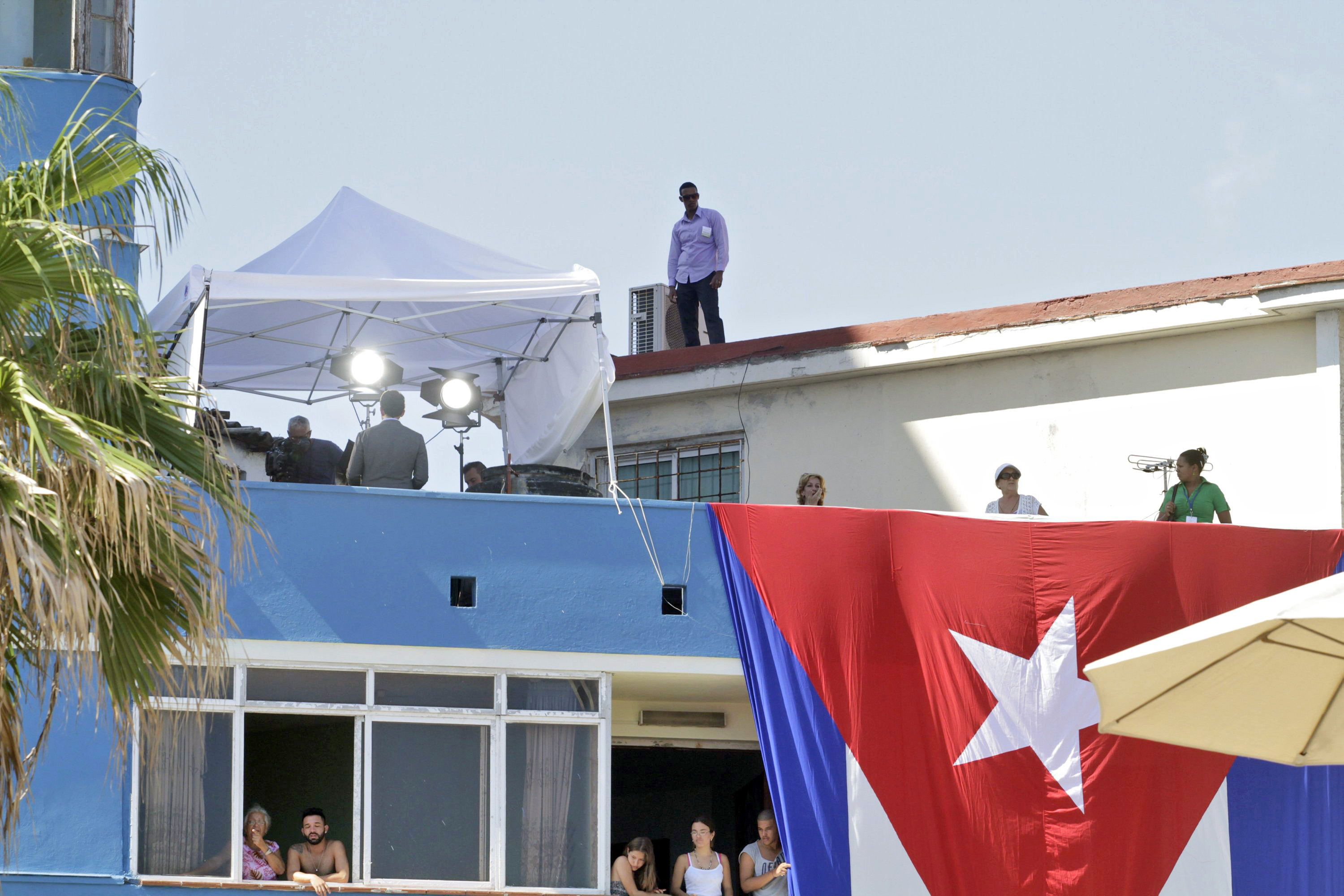 A Cuban security guard stands atop a building next to the newly opened U.S. embassy in which Cubans and international media follow the flag-raising ceremony led by U.S. Secretary of State John Kerry, on August 14, 2015, in Havana, Cuba. (Sven Creutzmann/Mambo Photo/Getty Images)
Getty Images

Relations with Cuba have since deteriorated, and now Evanina’s concerns go beyond Cuba’s own intelligence service. What about agents from bigger players like Russian and Chinese operatives believed to be roaming the tropical island as well?

The low-key spy games purportedly running in the shadows in Havana might have been dragged into some amount of light after apparent sonic attacks sickened more than 20 American officials there over a few months last year – curious incidents that may have also occurred in China.

Some scientists believe the incidents are the result of some kind of microwave weapon, but others suspected back in March that malfunctioning listening devices could be to blame.

Evanina said that more than a year on U.S. investigators are “still working” on solving the mystery.

“The FBI, CIA, NSA, State Department have had a joint investigation on that, which is not yet concluded, and we’re still looking towards that,” he said. “And I think the folks in our business are pretty confident what we’re going to find at the end of that if we can find the evidence to that. But I think if it was an intelligence-based operation, it’ll be hard to attribute.”

There are a lot of suspects roaming a fairly small island.