In celebration of the actor’s 80th birthday, we take a look back at his greatest style lessons, from strong summer statements to technically perfect tailoring

Harrison Ford knows a thing or two about being in the spotlight. It’s kind of a given when you’re one of Hollywood’s leading actors, starring in some of cinema’s greatest sensations like Star Wars, Indiana Jones and Blade Runner (to name a very successful few). Varying though Ford’s roles have always been, one thing they have in common is the execution of a memorable uniform — something which is spotlighted just as powerfully in Ford’s personal life.

While it may not be his main profession, Ford has proven himself to be a bit of a menswear maverick off-screen: consistently opting for classic pieces which stand the test of time and elevating these through carefully considered and subtly eccentric accessories. Today, in celebration of his 80th Birthday, we’ve gathered eight of his enduring moves.

1. The time he pulled out a polo shirt

Still ensuring a delivery of elegance thanks to its little pointed collar, the polo shirt is the perfect port of call for any upcoming occasion, whether it’s with shorts for high temperatures or slim fitting trousers for a social soirée. Top points to the actor for mastering the latter.

2. The time he served up short shorts

Turns out Ford mastered the former ensemble too, embracing the “short” shorts silhouette with total insouciance. The key to pulling it off is his choice of upper layer: a long sleeved, crew neck sweater to balance out the levels of his overall attire. For those who similarly wish to embrace the short statement, be sure to follow suit in Ford’s classic color choice (accurately matched with this Patagonia pair), and invest in a good pair of loafer shoes to elevate the base.

3. The time he excelled with tailoring

The good thing about tailoring is that it transcends the era if it’s done correctly. Ford has frequently demonstrated a flair for it across his style journey, communicating this through a combination of opposing textures and shades. In this case pictured, the trousers were twill, the shirt was cotton, the blazer was wool and the tie was a silk knit. Overall, an outfit that ticked every element of classic materials, and if there’s one piece we suggest including in your own, it has to be the jacket. Drake’s offers a similar design in today – perfect for the current season.

4. The time he made off-duty attire appealing

Ford’s style moves tend to revolve around formal pieces, but that’s not to disregard his off-duty attire. In fact, his approach for a casual outing is incredibly appealing, most commonly centered on lace up boots, blue jeans, oversized jackets and baseball caps. Our eyes are on the jeans here in particular: selected in a straight cut for comfort and a natural complement to the silhouette. Husbands Paris offers an equally flattering style today, cut with a high waist for elongation.

5. The time he nailed the essentials

While we’re on the subject of good denim, here’s another fine case in point for Ford’s everyday attire: a curation of only the best essentials. Beginning with a relaxed button-down shirt and partnered with a loose pair of low-rise jeans, the winning ingredient which sealed its timelessness was the footwear: a classic pair of white low-top tennis sneakers. Invest in a pair from the most famous brand to carry their legacy — Converse — and partner them with any of your everyday pieces for a failsafe style move.

6. The time he mastered head-to-toe black

It may be a popular statement, but still it rings true: you can’t go wrong with head-to-toe black. Especially if you approach it à la Ford: by way of a single-breasted suit, button down polo, relaxed black overcoat and patent leather loafers. Sure, it may not be an outfit to reference during the current season, but the colder seasons will come around in no time — and it’s always a good idea to have a similar finishing layer in your wardrobe for a rainy day. Today, we advise this one by Acne.

7. The time he brought an edge to elegance

Elegant though his favored pieces like polo shirts, straight cut jeans and single breasted blazers may be, Ford has always been conscious of bringing a bit of an edge to them. How so? Through accessories — namely sunglasses and belts. Pictured above in 1981, the selected shade was an eternally cool aviator style, while the belt discreetly dipped into cowboy style territory through its silver western buckle. Once you’ve got the relaxed garments nailed, we suggest investing in a slick piece of similar eyewear, ideally via Gucci.

Given Ford’s social calendar of film premiers and parties, a technically perfect tux is a compulsory companion. Unsurprisingly, his are as sharp as they come, a perfect example of which is this three-piece ensemble for the Guild of America Awards in 1983. Assembled with perfectly roped shoulders and exaggerated peak lapels, these details were Ford’s way of bringing a dose of pizazz to an otherwise simple sartorial move — and they carry just as much power today. For a faithful nod to his tailoring, no one stitches flamboyance better than Edward Sexton. 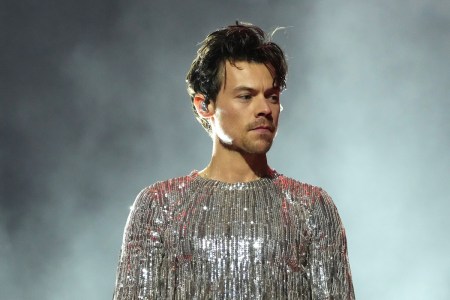