Spoiler alert — Hollywood knows how to get dressed up

Make no mistake: the best menswear at the 80th Annual Golden Globe awards was a huge success.
FilmMagic/Getty Images
By Paolo Sandoval @BoomBoomPaolow

Strap in, because for better or worse, the Golden Globes are officially back. The awards season circuit kicked off last night at the Beverly Hilton in Los Angeles, and after a year away to reflect on and correct systemic issues (see: institutionalized racism) and general misdeeds (see: an Emily in Paris nomination), we’ll dare to suggest that the Hollywood Foreign Press Association actually had something of a return to form during Tuesday night’s festivities: crowd-favorite winners from Everything Everywhere All At Once to The Fabelmans, an exceptional hosting bid by comedian Jerrod Carmichael and, most importantly, tons of dazzling menswear looks for us, the adoring public, to chew on. 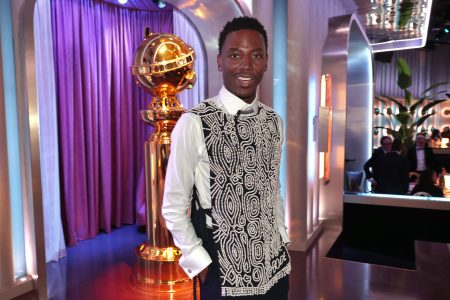 Jerrod Carmichael Was a Great Golden Globes Host. Why Wouldn’t Anyone Listen to Him?

Carmichael repeatedly had to ask the crowd to stop talking while he was on stage, at one point even telling them to "shut the f— up"

While the HFPA’s annual awards are typically considered a precursor to the Emmys and Oscars, Hollywood’s best dressed were still out in full force, with a host of reveled TV actors, movie stars and, inexplicably, Rhianna all turning out in the likes of Gucci, Dior, Thom Browne and more. We saw twisted tailoring, tons of bows, even some Ferragamo kitten heels, and were generally so impressed that we just had to share our favorites. Below, the best menswear of the 80th Annual Golden Globe Awards.

Why we liked it: Tyler James Williams knows how to make an appearance, and his Golden Globes look was no different. Runway Amiri isn’t for the everyday man…but then again, the Abbott Elementary star isn’t your everyday man, now is he?

Why we liked it: Gucci is hot. Austin Butler is hotter. Any questions?

Why we liked it: Combine the confidence and charm of chef-turned-multi-hyphenate — the Canadian was stellar in his supporting performance in FX “s The Bear — with some impeccable tailoring and a few bold choices, Ferragamo kitten heels chief among them, and Matty Matheson’s vibes become the winning formula.

Why we liked it: Babylon hotshot Diego Calva may have been snubbed for Best Actor in Motion Picture Musical or Comedy, but the Mexican actor’s three-piece forest green Gucci suit and OMEGA Speedmaster almost certainly deserved the win.

Why we liked it: When asked about their oversized Acne Studios look, House of the Dragon’s Emma D’arcy (of negroni sbagliato…with prosecco in it fame) indicated that the intended vibe was “child piano prodigy but the recital’s not going well.” We stan a ‘fit vision!

Why we liked it: Ke Huy Quan had a huge Golden Globes, and not just on account of his Best Supporting Actor victory: the Everything Everywhere All At Once man paired his big win with a subtlety dashing Thom Browne look and mouthwatering OMEGA 41mm De Ville Prestige Co-Axial Master Chronometer.

Why we liked it: Atlanta star Donald Glover and his Saint Laurent suit mix late-night cigars with white tie, a combo we couldn’t have expected but certainly aren’t mad at. Throw in some god-tier grooming (is that you, Burt?) and we’re sold.

Why we liked it: The Severance actor looked surprisingly dapper in Paul Smith, with a bold bow-tie (not to be confused with bowtie) and mini-mullet to match.

Why we liked it: Barry Keoghan’s teal LV custom (not to mention his ’57 Speedmaster) is a shining example of what the cropped look can do for you.

Why we liked it: We’ll just say it: Jerrod Carmichael has goddamn range. Not just in regards to hosting duties — though a killer monologue, Tom Cruise shots and Riri love should prove that — but in a host of menswear moments across the night. From sleek Giorgio Armani to poppy pink tailoring to a bespoke bedazzled vest from reigning American Designer of the Year Emily Bode, every look provided something fun and unique, unified only in their dopeness. Take a bow, Jerrod.