A look back at the honeymoon that reverberated around the world.

Fifty years ago, newlyweds Beatles legend John Lennon and multimedia artist Yoko Ono decided to spend their honeymoon in bed, like many couples might. But the weeklong stint at a hotel in Amsterdam and then another week at a hotel in Montreal held more meeting than just couple bonding.

Photographs from the Bed-In, which actually involved two beds, one in each hotel, spread like wildfire in 1969, and the event is still discussed today. The pictures show the couple, dressed in all white, sitting upright and talking to reporters. Behind them are signs that read “Bed Peace” and “Hair Peace.” 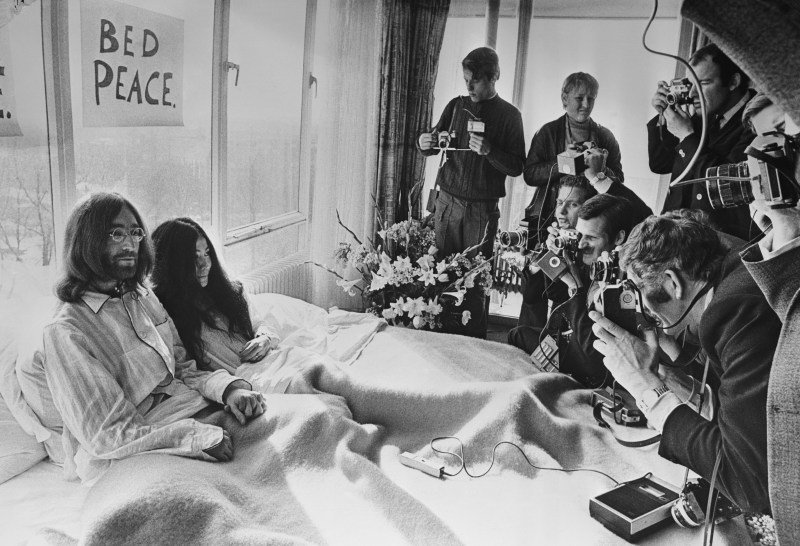 Beatles singer, songwriter and guitarist John Lennon and his wife of a week Yoko Ono receive the press at their bedside in the Presidential Suite of the Hilton Hotel, Amsterdam. (Central Press/Getty Images)
Getty Images

At the height of the Vietnam War and the Cold War, the couple was using their fame and honeymoon as a way to talk about peace. The protest itself was not incredibly effective in terms of policy, but it had a powerful impact nonetheless on artists and activists.

Lennon and Ono were married in Gibraltar on March 20, 1969.  The world was 14 years deep into the Vietnam War, and Richard Nixon had been in the White House for two months. After their nuptials, the couple traveled to Amsterdam. They stayed there from March 25 to March 31. The choice of location was not random.

“We thought that Amsterdam was a very important place to do it, because it has a very fresh and alive interest,” Ono said to a reporter at the time, according to Ultimate Classic Rock. “And we’re thinking that, instead of going out and fight and make war or something like that, we should just stay in bed: Everybody should just stay in bed and enjoy the spring.”

Each day, the couple, who were inspired by the sit-ins utilized by the civil rights movement and the anti-war protests, would allow scores of reporters into their room — they had sent out a card asking the media to join them. Reporters rushed to cover the event, likely expecting a much raunchier scene, due to the couple’s prior nude cover of the Two Virgins album.

Instead, reporters found the newlyweds sitting on their bed in the Presidential Suite of the Hilton Hotel, wearing pajamas and surrounded by white flowers.

“You should have seen the faces on the reporters and the cameramen fighting their way through the door! Because whatever it is, is in people’s minds – their minds were full of what they thought was going to happen,” said Lennon after the Bed-In, according to Ultimate Classic Rock. “They fought their way in, and their faces dropped. There were we like two angels in bed, with flowers all around us, and peace and love on our heads. We were fully clothed; the bed was just an accessory. We were wearing pyjamas, but they don’t look much different from day clothes – nothing showing.”

Lennon and Ono would answer question after question about their decision to stage this protest against the Vietnam War. The two held babies, sung with rabbis, argued with conservative media members, gave advice on resisting the establishment, and urged onlookers to get involved in their cause. 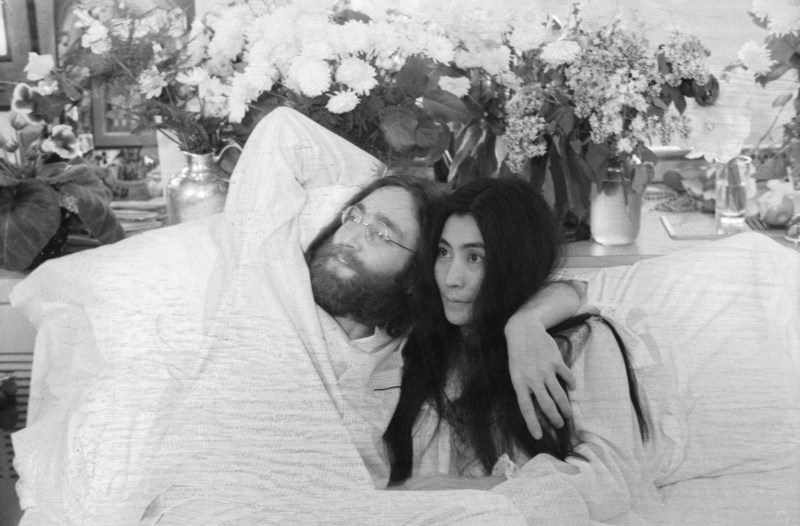 Beatle John Lennon and Yoko Ono, his bride of three months at the time this photo was made in Montreal in June 1969, pose in bed. (Getty Images)
Bettmann Archive

At the time, Lennon and Ono were frequently attacked for their views and their appearance, and were even called “hairy hedonists.” According to The Guardian, “Lennon received a hefty dose of derision and bile from the media for his actions and pronouncements at this time,” while Ono was “despicably treated as a convenient screen on to which all and sundry could project their misery at the break-up of the Beatles.” However, the couple used this attention as an element in the Bed-In, turning the media’s craving for stories into a way to speak about peace, and discuss how the real work starts at home, within personal relationships.

“We’re going to stay in bed for seven days, instead of having a private honeymoon,” Lennon said at the time, according to CBS News. “It’s a private protest …”

“For the violence that’s going in the world,” said Ono. “Instead of making war, let’s stay in bed.”

“And grow your hair!” added Lennon. “Let it grow until peace comes!”

Two months later, they staged the second Bed-In at Queen Elizabeth Hotel in Montreal (they had originally planned for New York, but Lennon was not allowed into the U.S. because of a cannabis conviction). The two arrived on May 26, 1969 and stayed for seven days. There, they recorded “Give Peace a Chance,” recorded with Allen Ginsberg, Timothy Leary, and Dick Gregory on June 1, 1969. The song was later sung by Pete Seeger and thousands of protestors at the Moratorium to End the War in Vietnam march in Washington, D.C., on November 15, 1969.

Ono later released footage from both bed-ins in a documentary called Bed Peace.

The bed has since been used by other artists to explore similar themes, according to NPR. And forty years after the bed-ins, the international peace group called The World March for Peace and Nonviolence decided to use the bed as a way to promote hundreds of global peace events taking place all over the world in the upcoming year. All talks were focused on nuclear weapons.

During the event that year, Chris Wells, the North American spokesperson for the World March for Peace and Nonviolence, told NPR, “John and Yoko had the vision to turn their honeymoon into a call for peace,” he says. “They asked us to imagine a world without violence. It is a call that remains unfulfilled.”

In a similar vein Ono looked back on the activism she and Lennon participated in during an interview with USA Today in 2015.

“I feel that, these days, there are more activists in the world. I mean, most people are activists now! Isn’t that amazing?” Ono said, according to USA Today. “That didn’t happen when John and I were doing it. We just didn’t feel like there were that many people with us. But now the whole world is activism! It’s great!”

Did the Bed-In have something to do with that? It is hard to tell, but it certainly hit home for some. And as Ono said in 2015 during the interview, “Well, it had a little to do with it, I suppose. I hope. I like to feel that way (laughs)! I’d like to think that the effort that John and I made was not in vain.”