There Is No Greater Pocket Knife Than the Humble Douk-Douk

Affordability, superior craftsmanship and a history of blood

The simple scimitar blade. The ferro-blackened handle. The Melanesian spirit-god (of doom and destruction) emblazoned on its haft.

There is no doubting that the douk-douk pocket knife is a handsome accessory.

But don’t let its charm fool you. This French folding knife was used by Algerian rebels in the mid-20th century to terrorize fellow countrymen and French colonists. Noses were sliced off with its razor-sharp steel. Eyes gouged. Ears dismembered.

Such nefarious purposes weren’t the original conceit: the douk-douk was originally a peasant’s knife, created for idyllic pastimes like slicing cheese, cutting rope and skinning sheep.

Handmade since 1929 by the Cognet family of Thiers, France, the douk-douk made its way from the motherland to the colonies. Its proliferation was a result of two qualities that don’t often reconcile: affordability and superior craftsmanship.

And at just under $25 bucks, those descriptors hold true to this day.

M.C. Cognet, makers of the douk-douk and its offspring (the El Baraka, Tiki and Squirrel), is family-owned and rigorously traditional. The current director, Pierre, is the grandson of the original douk-douk creator, Gaston. And Pierre’s son, Guy, is his apprentice.

“In total, there are 10 people producing these knives,” says Guy. “With only a few allowances for modernity, they are made in the same way that we have been making them since 1929, when my great-great-grandfather created the douk-douk.”

How did it gets its name?

Story goes that Gaston originally intended to sell the knife to the Micronesian market, and so began flipping through an encyclopedia he had lying around his workshop. He stopped when he stumbled across an illustration of the Douk Douk (that is, the Melanesian spirit-god) that’s now engraved on the side of the helve. The knife got its name and one of its most distinguishing features in one fell swoop.

“Sales in Micronesia were not so good,” says Guy, citing the fact that no one wanted to carry a blade embellished with an arbiter of doom. “But in North Africa and in other regions, the blade became very popular. Now it is sold in some shops all over the world — Canada, Australia, China.”

He didn’t say much about the blade being used for assassinations; he was more interested in telling me about its features. “We have many sizes,” he says. “Also, we have different designs.”

The knife is made the same way it’s been manufactured for three-quarters of a century, with the same six components: two rivets, a blade, a folding steel handle, backspring and bail. Its high carbon steel blades, hardened to Rc 50-53 and hollow-ground using water grinding wheels, make for a tough, practical knife so easy to sharpen you can practically scrape it across your stubble and still have a functional blade.

The blade ranges from 160mm to 200mm (6.2” to 7.8”) in length, perfect for slipping into your pocket or boot and whipping out when you need to carve your name into a tree or whittle a makeshift spoon. But M.C. Cognet also offers The Giant: a 260mm (10.2”) knife that Guy calls the most “imposing” in the range.

There are also other engravings available. The nickel-plated handle of the El Baraka portrays the Tuareg Cross of Agadez and was originally created for the Algerian market, as reproducing human-like figures on weapons is sacrilege in Muslim nations. The Tiki, the douk-douk’s second child, is engraved with a tiki idol and was later marketed to Polynesian nations. And the Squirrel, which also has a nickel-plated handle as well as a spear profile blade, was marketed to the French and French-Canadians.

“To me,” says Guy, “the best uses for the douk-douk are for fishermen and adventurers.” The carbon steel blade is easy to sharpen and ideal for cutting rope, whittling and other simple jobs you’ll find on the trail.

That said, the douk-douk has taken on a second life — as a collector’s item with a considerable cult following. “People from all over the world will write to us to tell us how they met a stranger with a douk-douk and became friends.”

In other words, this isn’t just a knife — it’s a conversation starter.

Or a conversation ender, if you happen to be a former Algerian assassin.

The douk-douk is available online, in specialty stores, or in the original M.C. Cognet factory, located at 54 Rue des Horts, Thiers, France. 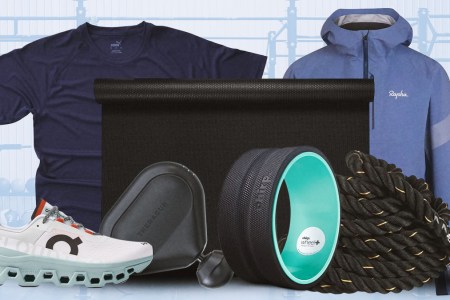