How one man incorporated his world travels into Denver's hottest social scene.

A peek inside Invisible City. (Sam Nguyen)
By Sally Sorte

I first met Paul Laurie on a plane. I was upgraded to first class (thank you, miles), and we got to talking over our sparkling waters with lime.

Somewhere between Salt Lake City and Denver, after comparing notes on life and travel, he told me about an underground supper club he had started called Silver Spork.

The gist is this: You meet at a sneaky location – a coffee shop, an alleyway, or the magazine section of a local bookstore – and then wait for someone to tip their hat and take you away. You follow them to the location of choice, and the nighttime festivities commence. 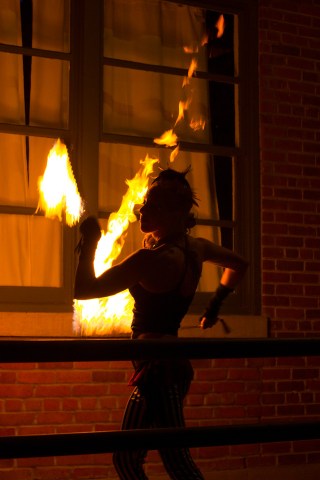 A chef and a bartender from local restaurants are given complete freedom to craft and pair a five-course meal with five (or often more) drinks.

Costumes are encouraged, especially hats of all sorts. The libations are free flowing, the food custom-made, the locations ever-changing, and the company is sure to be lively.

I disembarked the plane with a worn business card in my pocket that contained simply a picture of a silver spork and a website. Paul’s dad was picking him up, and they offered me a ride home. Such is Paul’s open attitude towards strangers and new friends. 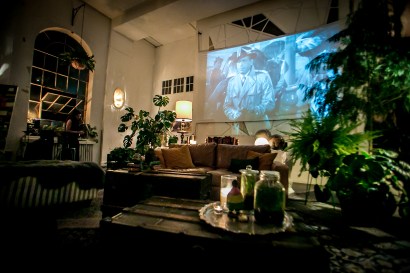 A shot of a Silver Spork event. (Sam Nguyen)

A few months later, I signed up for one of these mysterious Silver Spork experiences.  I donned a Gatsby-esque dress, false eyelashes, and a sequined feather headpiece, and prepared myself for an adventure.

39 strangers and I gathered at a dimly lit coffee shop and chatted over lattes in our costumed finery. The promised top hat arrived and we queued our way down the sidewalk in anticipation.

Upon arrival at the secret location, we were greeted with fizzy cocktails and lilting jazz music from a string quartet. We sat down at the long supper table and Paul greeted us, acknowledging that we had blindly donated money into cyberspace and entered the unknown. 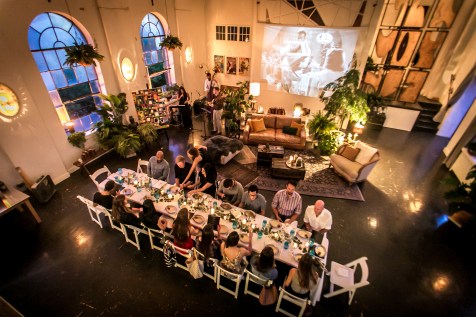 Paul explains Silver Spork as a way for people with a sense of adventure to get to know similar “explorers” in a different setting.

He employs various tactics to put people in this sort of playful, magical mindset.  The tables are covered in butcher paper, and attendees are encouraged to share feedback about the food, play games with one another, doodle and otherwise leave their mark. It’s a great conversation starter for sure.

Paul cues “musical chairs” about halfway through to get everyone up and moving, and sitting with a new circle of friends.

There is also a blind tasting course. Everyone is given a leopard-print sleeping mask to cover their eyes and is instructed to put out their hand. A vessel is then placed in your hand and you try to guess what you taste. (Food allergies are clearly vetted in advance.)

Paul describes his experience, “Everyone that serves you is blind, the restaurant is pitch black – no phones or watches – and it gives you the chance to calibrate your senses, expect the unexpected, and see if you can distinguish what it is when you take away your [preconceived notions].” 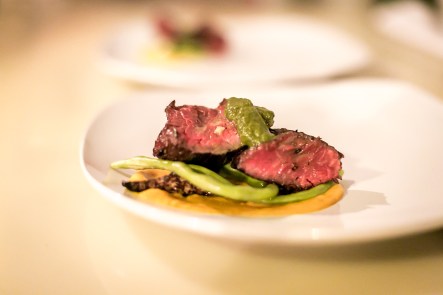 For his day job, Paul co-founded Walking Tree Travel, and through it he has traveled all over the world, meeting lots of types of people, and seeing a range of nightlife experiences, including supper clubs. He started Silver Spork to bring that same spirit to Denver.

“It was something I thought was missing from the Colorado scene,” he explains. “Selfishly, I also wanted to expand my social life when I moved back.”

Paul grew up in Denver, and moved back after several years in New York and abroad.

When he returned, he already had a base of friends in the hospitality business to call on for cooking and mixology. 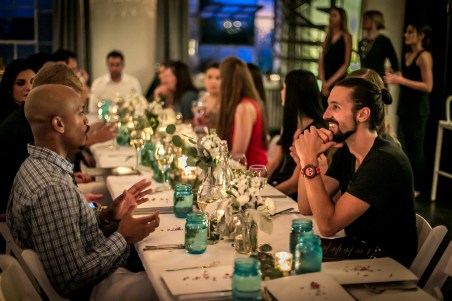 “As soon as we started, people really embraced it and had buy-in. They started out as volunteers and would put in huge amounts of time.”

The chefs and bartenders who participate are eager for the opportunity for true, honest feedback on their creations, which they find exceptionally rare and valuable. From there, the network continued to grow and expand.

Paul works closely with his team: Kate Wilkonson, Erin Streets and a bevy of chefs, mixologists, musicians, and servers. They have now hosted 36 Silver Sporks to date, with many more to come. 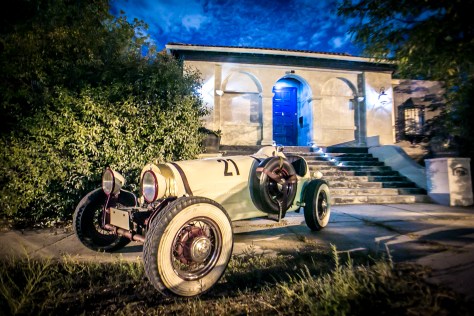 Over time, the Silver Spork concept grew – from lofts to warehouses and dance studios – people started to reach out wanting to do weddings or 40th birthday parties.  Given the demand, Paul and his team started an event production company so they could outwardly promote a bit and take on clients.

For Paul, it was all a hobby to start but was starting to become a full-time job. Right around that time, a certain building became available that opened doors for a new chapter of Invisible City. 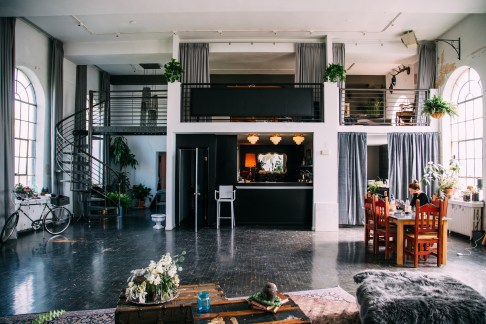 Another angle of Invisible City. (Kelly-Schroades)

Space was constructed in the 1920s and has been many things, including an old synagogue. Golda Meir, the first prime minister of Israel, lived just down the street.

Paul’s goal is to save the building from getting torn down. It’s one of those situations where the dirt it sits on is worth more than the building itself, as it is zoned for an 8-floor 55-condo structure. You don’t have to look far to see what it would become, as construction is underway next-door, for the same 8-floor residential zoning.

“It has significant historical value. It’s one of the gems we want to save,” says Paul.

His vision is to turn the space into a sort of bohemian cultural center.

He acquired the space from friends back in September and set to work getting it ready. Mauricio Hidalgo was the interior design mastermind, while over 80 people volunteered time and expertise to transform the inside into a bohemian dream.

“Everyone wanted to help out; it was a beautiful community building experience.”

Thousands of hours later, Invisible City looks like a place that Might in Paris’ Owen Wilson could have stumbled across on one of his nighttime jaunts with the Ella and F. Scott Fitzgerald, Ernest Hemingway, and Gertrude Stein.

The now brick and mortal Invisible City provides stable space for Silver Spork and a host of other events, including Midnight Bacchanals and a weekly pen to paper café workspace that turns into a happy hour in the evening, with practicing aerial artists and live music. They also host dance classes, debate classes, private events, photo shoots, video shoots, private acoustic sessions, and all manner of immersive theatre productions and parties.

While the upstairs is the prime event space, the downstairs level is available to rent on Airbnb. The whole building is also available for private events or retreats. 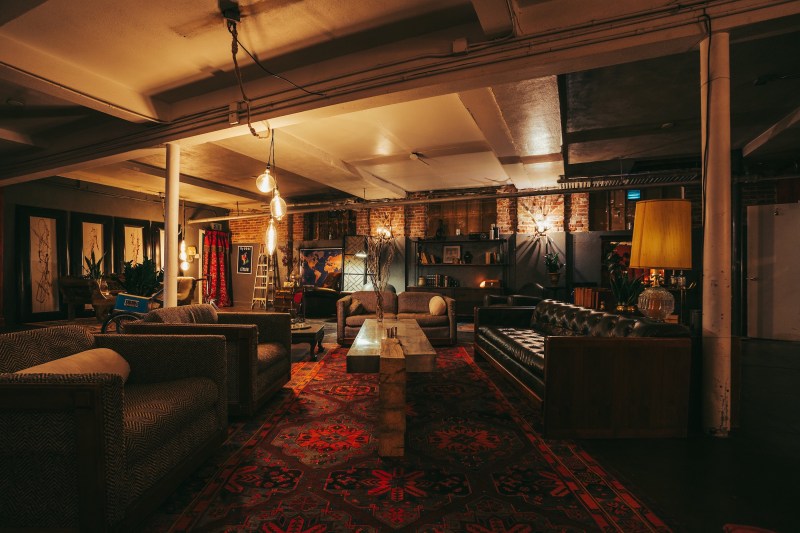 The downstairs of Invisible City which can be rented on Airbnb. (Kelly Schroades)

As an example, here is a week in the life of Invisible City:
Tuesday: Pen to Paper Café, a shared workspace for everyone from laptop workers to painters to musicians, followed by happy hour.
Tuesday to Thursday: An aerial school rehearses by day; Michal Menert rehearsed for his Friday concert by night.
Friday: Silver Spork Underground Supper Club, followed by an After Party for Michal Menert and his entourage.
Saturday Day: Rainbow Militia Aerial School rehearsal.
Saturday night: Group Muse, a living room series for classical musicians. They have done over 2000 shows but this was their first “massive muse.” Eight classically trained musicians from the Colorado symphony played for 125 people then mingled with the crowd.
Sunday: ‘Courageous Vulnerability’ hosted by Café de la Culture: Salon Philosophique. They facilitated a creative literacy salon focused on how men can support the #metoo movement. 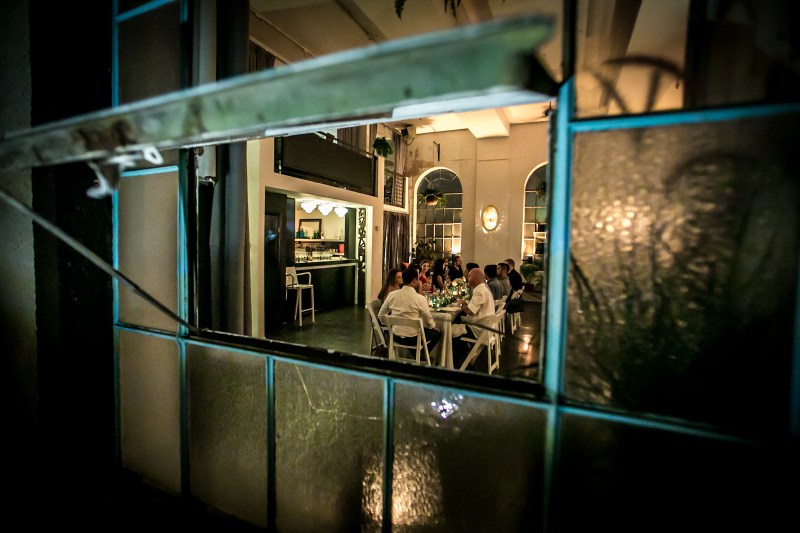 Paul lives in the space as well, in an open-air loft on the upper floor.

“It’s been a whirlwind. Every time I wake up here I feel like I’m in a dream world. It’s what I look for when I travel, and now I’m based in the epicenter.”

Paul admitted that you have to be an extreme extrovert to sleep above his active and growing bohemian community. At the same time, he says, “Every time that I sleep here alone it seems like a waste of space.”

Looking to join the party or host your own bespoke event? Contact Paul here.

Paul’s ultimate vision is to expand Invisible City to multiple locations worldwide.  It would be a global, membership-based travel community for people to stay and have unique experiences localized to the area.

First on his list are Havana, Capetown, Sri Lanka, Bali, Croatia, and Portugal.

“I want people to walk in the doors and feel like they’re in a different world, safe and willing to explore in whatever way possible. Offering unique experiences to connect & engage with strangers, so that people leave feeling replenished about the goodness of the world.“