Drinking This St. Patrick’s Day? Pair Your Booze With These Foods.

An eating guide from experts at Guinness and The Dead Rabbit 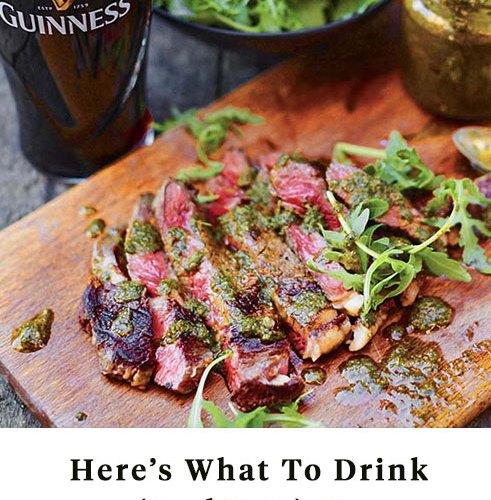 Turns out you need to wash down all that Guinness and Irish whiskey with some proper Irish food. Yes, “proper”: while Irish nachos are fun, they’re really not a traditional part of the day.

So take some food advice from a couple of experts. Herein, we asked Aaron Ridgeway (Guinness Beer Specialist at the company’s St. James’s Gate Brewery) and Sean Muldoon and Jack McGarry (co-founders of the Irish bar stalwart The Dead Rabbit) about their eating and drinking habits on March 17th.

Heed their advice, particularly this tip from Ridgeway: “Make sure to give yourself breaks, consume plenty of water and drink like a brewer; respect the beer.”

InsideHook: What’s the best thing to pair with a Guinness if I’m at an Irish pub?

Aaron Ridgeway: Irish pubs generally like to show off their traditional fare, and this includes dishes like shepherd’s pie, beef stew, oysters, coddle, bacon & cabbage or boxty [an Irish potato pancake]. Guinness Draught is a beautiful beer to have with most of the dishes you’ll find in a traditional Irish bar, with flavours of roast and coffee, supported by a strong malty backbone and a sublime, smooth finish — it matches really well with the umami character and texture of a stew or pie. The salty, briny flavor of oysters and the flaky texture of fish being a next level experience with a sip of Guinness Draught or Guinness Extra Stout to wash it down with.

IH: What’s the best food to pair with Irish whiskey if I’m at an Irish pub?

Sean Muldoon: A cheese plate. Cheese and whiskey go well together. We have an Irish cheese plate that goes great with Irish Whiskey and also beer. At The Dead Rabbit you could also try our new Guinness and Treacle Bread and Butter Pudding or the Apple Pie with vanilla ice cream. Generally I’d say to stick with cheese and desserts, nothing too savory.

IH: What’s the best thing to pair with a Guinness or Irish whiskey if I’m NOT at an Irish pub?

Aaron: Rich, hearty dishes like casseroles, game, roast vegetables and meats, fried mushrooms, or barbecue can all help to complement the dark and full body of a pint of Guinness Draught. Even a humble burger will have a wonderful complement of flavor and texture to go with your pint.

Sean: Any dessert or chocolate, or something with apples or vanilla. Look for flavors that work with the whiskey and enhance it rather than overpowering it.

IH: St. Patrick’s Day is on a Sunday. I might be drinking at breakfast … what should I eat?

Sean: Start with an Irish Breakfast. It’ll set you up for the day. Sunday is also a big brunch day so there’ll be lots of eggs on offer in most places — a Scotch Egg and an Irish Coffee would make for a good start.

Jack McGarry: Plenty of carbs, so you can sustain drinking into the late evening. Chips, sausage rolls, Scotch eggs and corned beef go perfectly with Irish whiskey drinks and Guinness.

Aaron: An Irish Breakfast is really the only thing to properly set you up for the day: High-quality grilled sausages and back bacon (rashers), black and white pudding, scrambled or fried eggs, a grilled tomato and toast. You can also include things like fried mushrooms, hash browns and baked beans if you wish.

IH: Are there any foods I should avoid?

Aaron: Particularly sharp or citrusy dishes are going to have a somewhat jarring flavor when combined with the malty and coffee character in a Guinness, so you may want to stay away from a key lime pie and similar foods. Lighter fare dishes will also be overwhelmed by the full body of a Guinness.

IH: Is it a problem if I drink both whiskey and Guinness on St. Patrick’s Day?

Jack: Guinness and Irish whiskey are my favorite drinks on the planet and thankfully, they go very well together. For the whiskey, I especially love Bushmills, which is one of the few distilleries in Ireland to use malt barley to handcraft triple-distilled whiskey in small batches, which creates a unique combination of smoothness and richness. [Note: It’s part of the Dead Rabbit’s Irish coffee.]

Aaron: Not really, no! The whole idea of pairing a whiskey with your Guinness is that you are able to find flavors that bridge the two. Think about the smoky character that the roasted barley gives Guinness, or the sweetness coming from the malt. The smooth finish from the nitrogen head. These are all important aspects to matching the spirit well, and in turn, the dishes should be similar. Also, a great way to celebrate the connection between Ireland and the U.S. might be to have a glass of Bulleit with your Guinness. The bourbon nose and sweeter vanilla character is quite beautiful when enjoyed together, and is a great way to give a nod to American-Irish relations.

IH: You’re the experts, so what are you doing on St. Patrick’s Day?

Sean: I’m running the NY Half Marathon from 8-9:30 a.m. Then I’ll come straight to the bar. I’ll probably have one of our new brunch dishes — the steak salad. I don’t drink, but I will be tasting, just to make sure everything’s as it should be.

Jack: I’ll be with my family on SPD in Ireland for a wedding. However, if I was in New York I’d be at the Dead Rabbit for the first portion of the day to enjoy the music, craic and have a few Irish Coffees.

Aaron: I’m going to be with my friends here from Guinness U.S. and doing whatever it is they have planned. For my meal, I’ll be looking at something like I described before, or perhaps trying out a New York burger while I’m here. If I was cooking at home, I usually like to experiment by making a Guinness reduction for braising meat and then slow cooking a stew, or alternatively using it as a glaze for roasting vegetables.

How Many Times Do Men Actually Need to Shower Per Week?

Drones Reveal That Great White Shark Encounters Are Extremely Common
The Sacred Male Body Modification Practices That Still Exist Today
Van Morrison's New Album Is an Utter Embarrassment
How Many Times Do Men Actually Need to Shower Per Week?
Retinol Is the Miracle Skincare Product Every Man Should Consider
What’s Up With the Sudden Delta-8 THC Craze?

The Sun Also Burns: How Skin Cancer Became a Decidedly Male Problem
Why Are Non-Alcoholic Spirits So Expensive?
From Polo Players to World War II Soldiers, Exploring the History of the Desert Boot
Is This How It Ends for Roy Andersson?
Save 25% When You Buy Two or More Sweat Styles at Brooks Brothers
These Handmade Italian Belts Are 70% Off
From The Big O to Russell Westbrook, Triple-Doubles Have Never Translated to Championship Basketball
Our Favorite J.Crew Sweater Is an Extra 50% Off
New Balance's Most Responsive Running Shoe Is Somehow 50% Off

What’s Up With the Sudden Delta-8 THC Craze?
Jeff Bezos’s New Yacht Is Getting a New Yacht
Billy Crystal Is the Latest Aging Comedian to Complain About Cancel Culture
11 Things Quarantine Killed Off That We Hope Never Come Back