How Parmesan Cheese Became a Target of Italian Thieves 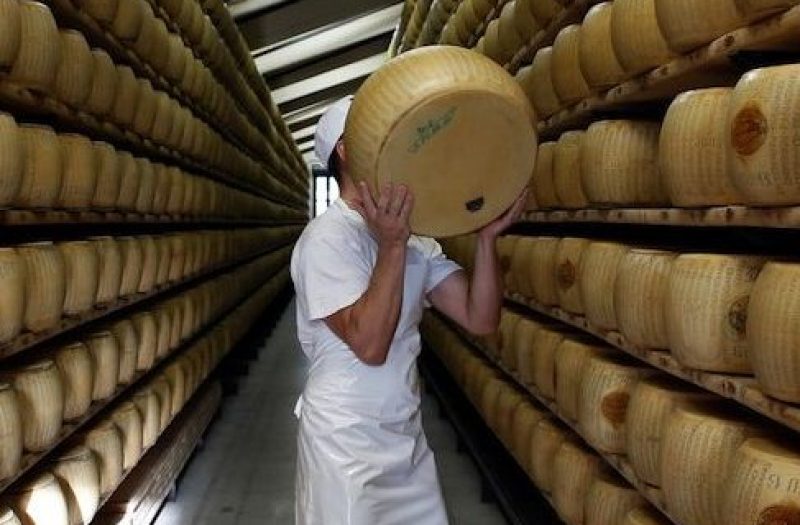 A worker selects a whole Parmigiano-Reggiano cheese, which is sought after by Italian thieves for the Parmesan cheese black market, from a storage rack in Fidenza, Italy, 2014. (Alessia Pierdomenico/Bloomberg via Getty Images)

Parmesan cheese is beloved all over the world. A single wheel of Parmiggiano Reggiano can sell for $500. There is a downside to this: it’s become a prime target for thieves. Indeed, there is a thriving black market, as an estimated $7 million in Italian Parmesan cheese has been stolen in just the last two years.

Parmesan cheese has proven to be an ideal target for culinary criminals. In order to be certified Parmiggiano Reggiano, the cheese must age for at least a year. That means there are warehouses filled with these valuable cheeses, often located on isolated farms. If criminals can gain access to them, it’s a quick score. (A cheesemaker named Lorenzo Pinetti says bandits made off with $100,000 in cheese in just minutes, sliding the wheels out of a window.)

Of course, Parmesan cheese may be valuable to criminals, but it is essential to the communities making it. Quite simply, Parmiggiano Reggiano is key to the economies of many small Italian towns. The result is that while the larger world tends to hear “crime in Italy” and think of epic battles with mob bosses — 2016 saw the capture of the notorious Sicilian Matteo Messina Denaro after a manhunt lasting two decades — police in numerous communities put a priority on protecting cheese.