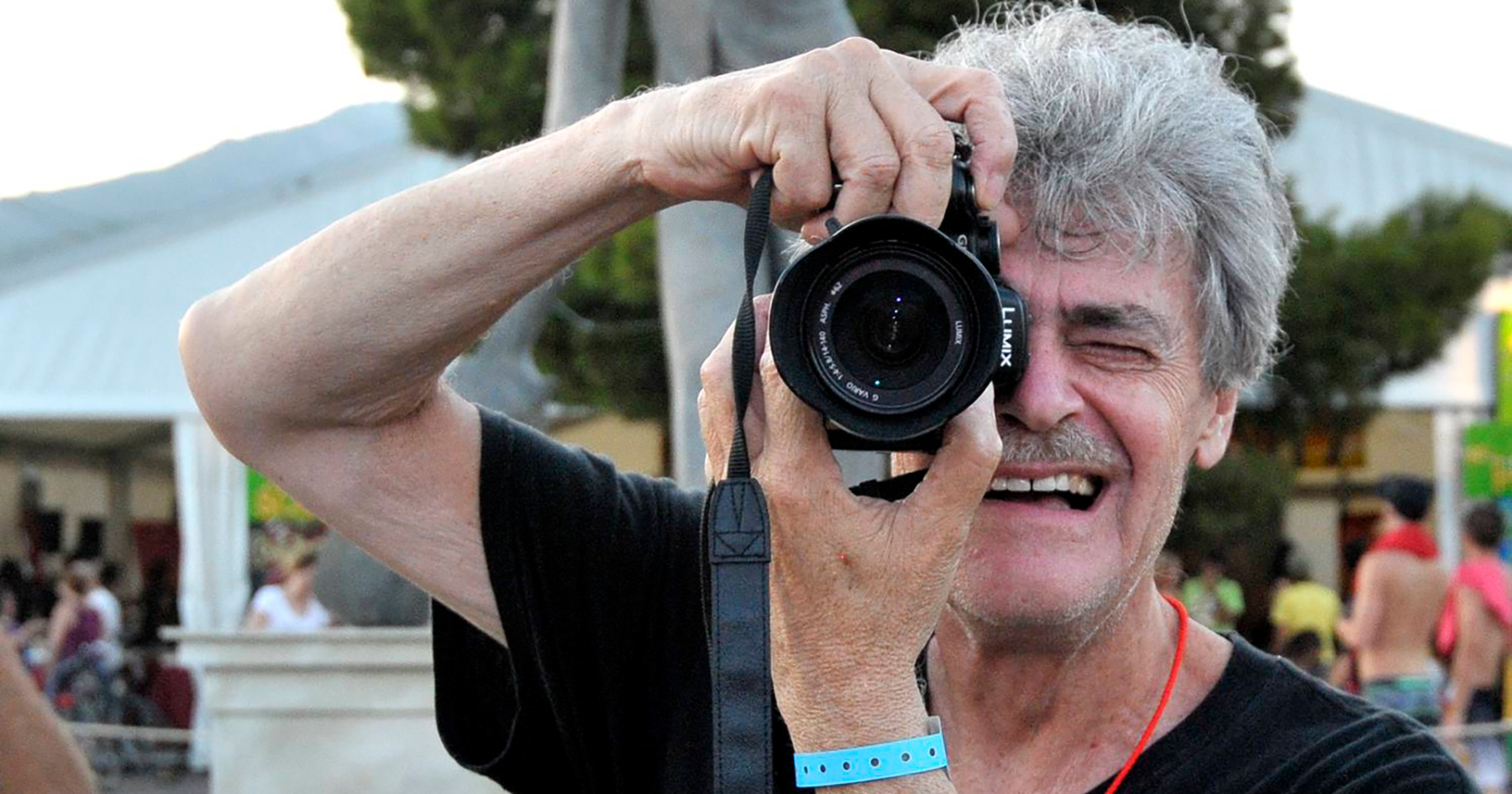 There’s an old quote that the Steffens family used to hang over their door in their home in Silver Lake. It’s the same quote that opens Roger Steffens’s newest book, The Family Acid California.

It says, “LA is where the migrants and the mutants and the future people come. The end point of terrestrial migration.”

Never has a quote been so appropriately applied to a project.

The Family Acid California is a people’s history of the Golden State. Subjects, times and places mix freely with an impressionistic style that suits them better than any realistic or objective portrayal would. Anyone with even a passing interest in the history of the state’s counterculture will look the photos over and invariably draw the same conclusion: So this is what it was really like.

Steffens is also one of the last true Renaissance men in LA — he is a photographer, reggae archivist (the Marleys called his Echo Park home the greatest archive of reggae history in the world), DJ, actor, narrator, poet, broadcaster, editor and lecturer. In other words, he’s lived a life most of us can only dream of, and he’s not slowing down anytime soon.

On the eve of his latest book release, we sat down with Steffens to talk about his work, Los Angeles and how anyone with a camera and a sense of adventure can take better photos of the city we all call home.

InsideHook: Tell us about the new book, The Family Acid California?

Roger Steffens: It’s a whole amalgam of all my California experience, from Death Valley to Sequoia to the Redwood forests of the North, to La Jolla and San Francisco, Berkeley, Mendocino and Humboldt. It’s the whole thing.

I first saw Los Angeles in ‘68, during a month home on leave from Vietnam after my first year. So it begins in ‘68 and actually goes through 2016, but it’s virtually all slides, and just a couple of more recent pictures that were digital. The slides went through ‘93. The prints went from ‘93 to 2005, so it’s virtually all film.

What did you/do you use to shoot?

I’m strictly a Canon man. I’m a Lumix man now. Most of my shooting is done with this wonderful little Lumix DMCLX7 that does triple exposures and panoramas and video. I love this camera, I got tired of carrying around all the heavy weight, because I do a lot of grab shots and street photography and when I’m driving I shoot a lot. You see things out your window in LA and if you don’t get it right then …

Are there any favorite spots in Los Angeles you like to shoot?

Melrose. The sidewalk stencils, the graffiti the back alleys with the murals. Not so much the graffiti as the pictures. One of my principal subjects is murals, all over the world.

What are some places in LA that people wouldn’t think about shooting that you’ve really enjoyed? Underrated spots, if you will.

I think Echo Park has a whole heap of fascinating stuff. I love following construction sites from the bare land to the final product, and there’s so much of the old being torn down now in Echo Park that I think it’s very important to witness that and chronicle that and show what is being lost.

And the ephemera. Of course everything is ephemeral. It’s silly to talk about the ephemera; the whole fucking planet is ephemeral now. Bus benches, especially if there’s an interesting person on the bus bench that has some relationship to what it’s advertising. I’m always looking for those juxtapositions. And just the tremendous amount of advertising art that is in permanent flux. The murals, some of them last a week. They’re graffiti’d to death and painted over. We’ve lost some really first-rate art just in Silverlake and Echo Park. But I’ve got pictures of everything.

Are there times of year or times of day when it comes to shooting LA?

I’m not a morning person, not at all. I think that’s because I’ve been an actor all my life and so much of that work has been late at night. Less so now that I’m old, but a lot of my best work is at night. But I love golden light in the winter, that’s 3:30-5:00 p.m. and in the summer it’s 7:00-8:00 p.m. But when that golden light hits LA there’s nothing like it, it’s spectacular. … The winter is especially wonderful for great sunsets. That’s one of my principle loves.

What are some things you’ve learned about your subjects when it comes to shooting?

I like to shoot people and I don’t want to be intrusive, and I think you have to be very careful about how you do that. I don’t want people to be uncomfortable. And that’s not always easy to accomplish.

Are there any methods you use to achieve that?

I’ll line-up the shot and then look the other way when I take it, if it’s something I’m shooting out of a car window, like a bus bench. I don’t want the people to feel upset — but then there are some shots that you just gotta have. You can’t miss with this picture, and no matter what it takes, you gotta take it. Often they’re taken just as the light changes, and I can click and move away quickly. A shoot-and-run.

It’s the greatest blessing of my life. It’s just wonderful, they discovered their old man. I hired Devon to do the digitizing and that really opened up a whole different way of his looking at his parents. But they were very blasé. Nina Simone would come for dinner and they’d stay in their room, Burning Spear would be sitting here talking to me and Devon wouldn’t come out of his bedroom. “Devon, come outside, Burning Spear is here!” “Dad, I gotta do my homework.” They took it for granted, but it wasn’t really a normal life. And I just feel blessed for all the wonderful people who shared time with me and my family.

Anything that surprised you when putting together The Family Acid California?

Well, half the pictures Katie puts up I have no memories of taking. There are so many images, and she’s not even near finishing digitizing the prints. Not even half. And she doesn’t really post any of the digital images. So it’s a surprise to me when I wake up in the morning and see what she’s posted [on the Family Acid Instagram].

What compels you to shoot something? What are the things are interest you? People? Places? Just an instinct?

Juxtapositions. Color. I’ve been compared by several critics to a guy named William Eggleston who is a colorist and I hadn’t known about him. I’ve never made any study of photography or anything like that. I looked at his pictures and they reminded me of mine. Actions that are interesting, if I can capture something in process. And just nice compositions. I’ve done very little black-and-white photography. I don’t know how colors transfer in the black-and-white scale. I’m really attracted to brilliant color. And subtle color, too. And LA has both.

Double exposure is something you’re renowned for, how did that come to be? are there other techniques that have interested you along the way?

There was a roll a film that [Ron] Kovic shot in Saigon and Cambodia. He didn’t wind it all the way back and it ended up in my camera bag when he returned from Cambodia, and I shot the roll again. And it had all these war pictures over a mansion in Cincinnati filled with 1830s stained-glass windows which I was shooting. I never had the patience to do darkroom work, so everything I wanted to do I had to accomplish in the camera when I was shooting the picture.

When you look back on The Family Acid California — is there anything that sticks out as the most rewarding part of this project?

Just the fact that California is so deeply entrenched in my bones now. I come from a very old East Coast family that settled on Staten Island in 1660, and our generation all left. Some people are Californians, but they’re born somewhere else. That’s how I think of myself. When I first saw it in ‘67 on my way to Vietnam, I just said ‘If I make it through the war, I’m going to come back here to live.’ And that’s what I eventually did. This is my love song to California.