Bringing back the Sunday drive in the age of COVID-19

Want to stay six feet away from people? Get in your car.
Jan Kronies/Unsplash
By Alex Lauer @alexlauer 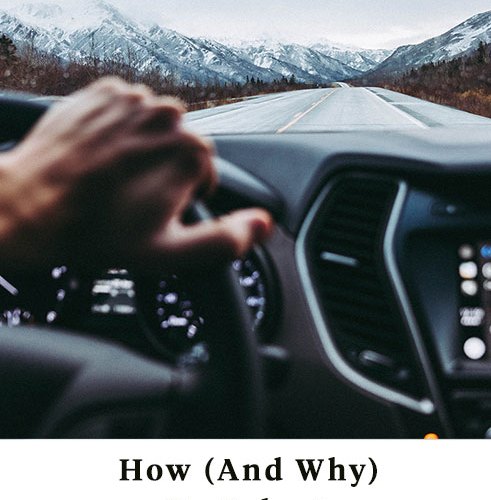 The 2010s were all about reviving unnecessary nostalgia. There was no real reason to bring back cassette tapes or the Backstreet Boys, but we did it anyway. But in 2020, the coronavirus outbreak has society rekindling pastimes that are useful during the current mandates of working from home and social distancing; baking bread from scratch, taking a full hour for lunch and phone sex are all officially on-trend again.

If I may, I’d like to add one more revival to the list: the Sunday drive. Does anyone remember those? The asphalt pleasure cruises with no destination, back before Google Maps told you every turn to take, when you turned on local radio or a CD or simply rolled the windows down and drove somewhere you’d never been before. That might be just the antidote we need during this time of social isolation.

I’m not saying go against any local, state or national public health recommendations. In fact, it seems to me that a leisurely drive is a much safer way to get out of the house than what’s happening in cities across the country. While California, New York and other states have enacted either shelter-in-place or other similarly tough stay-at-home restrictions, Americans are still free to go for walks and get outside as long as they stay six feet away from each other. Turns out, that recommendation is not working in New York City, and it’s not working in Minnesota where I live, either. People are congregating in parks, meeting up with groups they’re not living with, and overall being complete meatheads.

To be fair, the lack of public adherence to social distancing may be due to the fact that people are just learning the term. If you’re looking for a succinct way to show the seriousness of the practice, I’d recommend this from a recent New York Times feature: “If it were possible to wave a magic wand and make all Americans freeze in place for 14 days while sitting six feet apart, epidemiologists say, the whole epidemic would sputter to a halt.”

That, of course, is not possible. But you know how you can get outside, keep your sanity intact and never come within six feet of another person (who you’re not already quarantined with)? Get in your car and go on a Sunday drive, or a Tuesday afternoon drive, or a drive literally anytime you want.

When was the last time you did that? Before COVID-19 put most of the world on pause, I was writing on the automotive beat just about every day, and that’s the only place I ever saw people Instagramming, tweeting about or even casually mentioning leisure drives. It was all car people — guys with impeccably restored BMW E9s, brand new Porsche 911s or even just bargain Miatas. They saw their cars as a means of escape, adventure and joy, while the rest of American society saw them as just another tool in the daily humdrum of life, a way to get from A to B, you get the point.

I don’t know who needs to hear this, but you don’t need a fast car, a convertible or even necessarily a car you like to enjoy a leisurely drive. When I was younger, it felt like every weekend morning after church or someone’s soccer game my family would get in our Ford Expedition (Eddie Bauer Edition, for what it’s worth), turn on NPR and simply cruise around with the windows down. I hated it at the time because Car Talk was usually on (which, to a kid, was like Statler and Waldorf but for old, boring people) and I had no control. Today, my car isn’t much better (2004 Volkswagen Jetta, baby!) but I now look forward to turning on Car Talk or Classical MPR, sticking my phone in the center console and hopping on the freeway in any direction that speaks to me.

This weekend, after our first real week of self quarantining, my girlfriend and I found out firsthand that the rumors about cheap gas prices are, in fact, true. So we loaded up the tiny tank in the Jetta with an unheard of $1.92 per gallon and took off in a southeasterly direction. After only 30 minutes we saw horses and cows out in the pasture (this is Minnesota, after all). We saw a handful of our 10,000-plus lakes beginning to melt along the shore. We even passed an oil refinery I never knew existed, which admittedly would be an eyesore if I passed it every day on my commute, but after a week cooped up in my apartment and spending a good chunk of my free time checking in with family and friends via video calls, the new scenery was a welcome balm both for my digitally-strained eyeballs and my mental health. And it will be for you too, if you do it right.

Normally, there’s no wrong way to do a leisurely drive. But during the coronavirus outbreak, there are certainly some rules you need to abide by. First of all, it’s perfectly OK to take a drive even if everyone — from Instagram to Mel Brooks’s son — is telling you to “Stay Home.” What they’re really trying to do is isolate people from each other. That means, when you do go on your drive, don’t make any pit stops other than for gas. Communities that don’t have any positive COVID-19 cases at the moment may be less equipped to handle them, so even if you drive by a diner or a vintage shop that you’d normally stop into, stay in your car.

It’s oxymoronic, to be sure, imposing such strict rules on the Sunday drive, a pastime that thrived because of the lack of rules. But it’s necessary during a pandemic, especially if we want to keep the privilege. Who knows, the government (on a state or national level) may restrict car travel at some point, and if that happens, we’ll gladly oblige to keep people safe.

For now, I don’t care if you live in a one bedroom-apartment (like myself) or in a mansion that’s separated from every other house by a perfectly manicured acre of lawn, staying cooped up in your home 24/7 takes a toll on your mental health. (Just ask the celebrities.) For all its gas guzzling faults, your car is your golden ticket out. And maybe when all this is done, we’ll all learn to slow down, put the phones down and drive like it’s Sunday morning all the time.