How one channel got me to finally cut the cord

Since you can stream just about any show or movie from just about anywhere, the very word “cable” sounds outdated in this digital world. It’s like saying “I taped it for you” or “Let’s stand here and hail a cab,” when you haven’t owned a VHS player in two decades and your monthly Uber bill is almost as much as your rent. Cable is dying, digital is king and cable news finally got me to recognize once and for all that it’s time to let go.

The proof is easy enough to find, I just didn’t want to find it. There are countless articles on how to hack your way out of that cable bill, and so many Millennials are looking for their television from alternative sources that Business Insider bestowed one of the “Millenials are killing…” takes that the publication loves to traffic in on the matter. Since I sit right on the border of Gen. X and Millenial, I have some small amount of emotional connection to my basic cable plan and have tried to imagine a life without my thousand channels, only four or five of which I use more than once a month. But still, how would I zone out on a random NBA game played between two teams I have zero emotional investment in on a Tuesday after work without my cable? What would I do without the opportunity to catch Diners, Drive-Ins and Dives at any hour of the day? How would I get my news? Cable was a vital part of my life.

Or so I thought even months after my wife suggested we finally cut the cord after a completely idiotic, Kafkaesque billing issue with our provider. I kept putting the issue off until, one night after work, I turned on MSNBC, the channel I tend to go to most often if I’m feeling lazy and want somebody to break down the day’s events for me because I don’t have time to read a bunch of articles to catch up. I always thought to myself that while I might not agree with a lot of the people or views on the network, at least the takes seemed a little more nuanced — albeit still biased — to me. There was a little less screaming than other networks. I hate screaming.

But on that particular night I landed on Hardball With Chris Matthews, with a handful of left-leaning commentators discussing whatever was happening in the political world, and I noticed a variation on a word kept coming up: “fascinating.” The panel would discuss one topic, usually about the plight of a group affected by the latest tweet by the president or a law proposed by a senator, then somebody laughed and said how “captivating” or “interesting” it was. It happened so much, and each time with such a degree of smugness and glee that it made me think, “These people might be sociopaths.” And I don’t need sociopaths in my life. I certainly don’t need to pay for them.

After that night, I decided to put cable news, and cable as a whole, under the category of things I’m cutting out of my life. 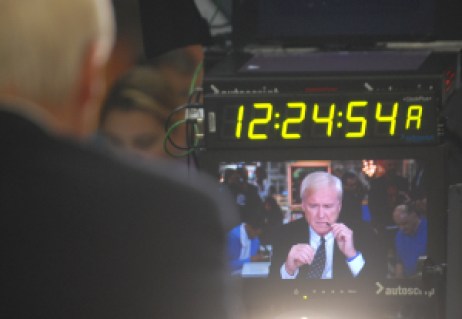 In her new book, How to Do Nothing: Resisting the Attention Economy, the writer and artist Jenny Odell spends a lot of time looking at exactly what the title suggests: doing nothing. Getting away from the things that mine your attention and give you little to nothing in return. So things like Facebook and Twitter obviously earn a lot of pages. Cable news doesn’t come up, but there was one passage that really crystalized my thinking on what I need and don’t need in my life.

In the chapter “The Impossibility of Retreat,” Odell writes of the journalist Michael Weiss, who, in 1968, was tasked by the Baltimore News-American with covering Spiro Agnew as he lobbied to become Richard Nixon’s vice president. Sensing that Agnew was “a truly dangerous man,” as Odell puts it, Weiss tried to do his journalistic duty by remaining impartial with his profile. The only problem was that the managing editor at the Hearst-owned newspaper saw it differently, and killed the piece after it only ran in one edition.

That was the last straw for Weiss. He quit his job. Moved to a house his parents owned in the Catskills and didn’t read a single newspaper for months, “after years of reading four or five a day.”

I’ve been trying my best to retreat of late. Maybe not like Henry David Thoreau to a cabin in the woods, but away from the things I don’t really need as much of. I deleted Twitter off my phone, and once I figure out how to untangle all the things connected to my Facebook, I plan on getting rid of that completely.

I realize that since I travel, I’ll never fully escape it: somebody will leave Andrea Mitchell Reports on the treadmill next to me at the gym, and CNN will maintain its tyrannical grip on airport televisions, and that’s fine. But please, if you read this, as much as I find Ari Melber’s use of hip-hop quotes really endearing and as much as I like Chris Hayes, I don’t want to talk about their shows. I don’t want to hear what Don Lemon had to say on CNN, I don’t want to weigh in on whatever they said on Fox and Friends, and I won’t have anything to add on the latest Democratic candidate going on Morning Joe to make their pitch in the a.m. before coming back for The Last Word with Lawrence O’Donnell at night.

And it was MSNBC that made me realize it was time to do that, that it was time for me to finally retreat. Fox News never had me, and most people on CNN seem like they’re just there collecting a paycheck. But that episode of Hardball I watched really touched on something that I’d been thinking for some time but wasn’t ready to admit: all cable news is bad. It’s all about the ratings. MSNBC is no better or worse than those other networks. It shines a light mostly on Democratic politicians the way Fox does Republicans. Both networks traffic in this idea that only one party does good and one party does bad. It’s really dangerous, and cable news is roundly guilty of it.

As Michael Hirschorn wrote in “How MSNBC Created a Cable-News Epidemic” for Vanity Fair last December, “Cable news traps us in the daily drama, forces us to watch the news ping-pong back and forth across our screens, locked in a variant version of the feelings Alex Heard first called hathos — hate + pathos — the cringe-y pleasure derived from watching bad things happen to other people.” Cable news is people in makeup and suits and nice office chairs with flashy graphics or New York City in the background discussing the very real problems people with little to no power are facing the way they might the game James Harden played last night. In the case of MSNBC, Hirschorn continued, “The pleasure is mostly gone, but the hathotic (if I may) compulsion grows ever stronger, because the bad things are happening, or are about to happen, to us.”

That obsession with drama probably explains why MSNBC’s biggest prime-time shows have seen a sharp decline recently, and it’s another big reason I made my decision to finally do away with it. It’s because if you watch a show like Rachel Maddow’s, you’ll likely find the Oxford-educated Rhodes scholar trying to make the connection between Trump and Russia as if she were Charlie from It’s Always Sunny in Philadelphia trying to crack the Pepe Silvia case. It felt at times like Maddow was trying really, really, really … really super hard to be the one to bring down the Trump presidency by herself, and as somebody for a site I disagree with about 95 percent of the time wrote, yeah, it also felt a little like watching somebody spin a conspiracy theory every night. That was a disappointing devolution to watch.

But that points to an even bigger question: Why was I turning to the news in the first place? I am reluctantly on Twitter (it’s part of my job). I read from plenty of different outlets on a daily basis. I think about the news and try to process it to the best of my ability. So do I need somebody feeding it to me like a bird chewing up food and spitting it into the mouth of its baby at the end of the day?

That was the clincher. I realized I watch cable news not so much because I want to be informed, but because I was simply looking for something to watch. Just like pretty much everything else on cable, the news was something I settled on to pass the time, and when the events of the day become mindless entertainment, that’s a problem. I can read the news and find ways to watch the shows or basketball games I actually want to watch; I don’t need to keep cable around for any of those things, and I certainly don’t need it to inform me of what’s happening in the world.

So thanks, MSNBC. You helped me realize I can finally stop spending however much I pay each month on something I don’t really need. I guess cable news was finally good for something.