What’s With All The Rumors About Tom Brady Going to the Miami Dolphins?

Tom Brady of the Tampa Bay Buccaneers warms up prior to a game against the Miami Dolphins.
Mike Ehrmann/Getty Images
By Evan Bleier @itishowitis

Dale Arnold, a former sports radio host in Boston who reported early on that Tom Brady would be signing with the Bucs in Tampa, posted on Twitter on Thursday that he thinks the 44-year-old quarterback could be returning to his old division, the AFC East, this season. Unfortunately for Bostonians, the Patriots aren’t Brady’s rumored destination.

“Would not be surprised if Tom Brady didn’t play for Buccaneers next season,” Arnold posted. “Try a little further South. And notice that Rob Gronkowski hasn’t re-signed with Buccaneers yet.”

After implying that Brady is somehow going to make his way from Tampa Bay to Miami to play for the Dolphins online, Arnold doubled down on his take during an appearance on his old radio station, WEEI, and went so far as to say that the involved parties are “working on it.”

Crazy as it sounds given that Brady has actively been recruiting players like wide receiver Russell Gage to join him in Tampa, Arnold’s report jibes with earlier reports from Mike Florio of Pro Football Talk that the Dolphins were hoping to pair the seven-time Super Bowl champ with former Saints coach Sean Payton in Miami. One other notable aspect of that proposed scenario would have been Brady coming aboard as a minority owner of the team.

The Dolphins have since hired ex-49ers offensive coordinator Mike McDaniel as their head coach and he has publicly committed to moving ahead with third-year quarterback Tua Tagovailoa as his starter. However, it is hard to imagine McDaniel would turn up his nose at swapping out Tagovailoa for Brady and having the three-time MVP throwing passes to newly acquired stud wideout Tyreek Hill.

So, is there any truth to the Brady-to-the-Dolphins rumors? It’s impossible to say for sure, but it seems unlikely at best if for no other reason than the Bucs would have to agree to trade Brady, a move that would make their team worse no matter how you slice it. And with Brady already back with the team (as opposed to waiting to un-retire until after they had signed a replacement for big money), any potential leverage he had to force his way out is gone. Even putting that to the side, Brady’s best chance at winning a championship this season lies with the Buccaneers as the NFC, especially Tampa’s division, looks fairly weak while the AFC looks stacked.

For what it’s worth, another insider with Boston ties, Jeff Howe of The Athletic, threw cold water on Arnold’s report.

Florio also called Brady going to the Dolphins this season “a major stretch.” He did float another idea though.

“Now, 2023? That’s a different story,” he wrote on PFT. “Miami could make sense then. For now, though, the idea of Brady leaving the Bucs seems even harder to imagine than him retiring and coming back after only 40 days.”

Of course, that did actually happen… 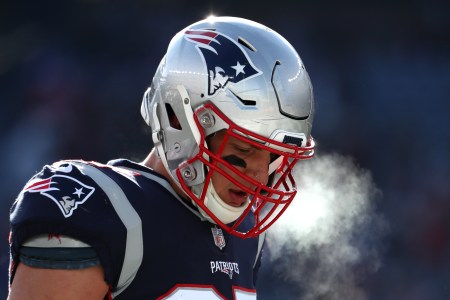