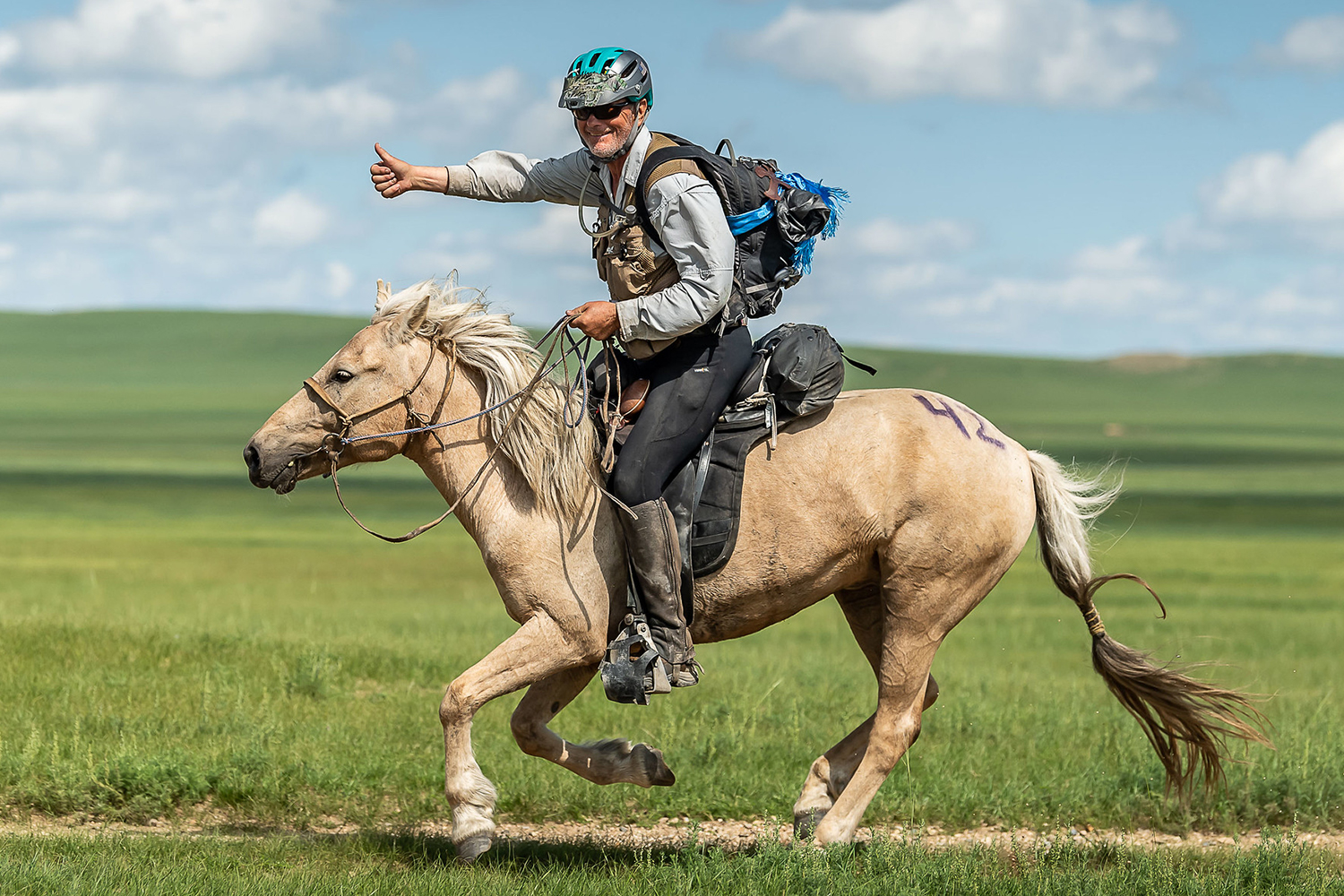 Robert Long riding in the last day of the Mongol Derby.
Sarah Farnsworth via Mongol Derby
By Alex Lauer / August 22, 2019 9:27 am

The Mongol Derby is a harrowing endurance race from another time. It began in 2009, but the 620-mile horse race through the Mongolian steppe is modeled after Genghis Khan’s legendary postal route. It’s dangerous, exhausting and disorienting, which would make you think it’s a young rider’s game. Robert Long proved otherwise.

Last Thursday, the 70-year-old amateur rider from Boise, Idaho beat out 43 other riders from 12 different countries to win the Mongol Derby, according to The New York Times. That also makes him the oldest rider ever to finish the race, which the Guinness World Records cite as “the longest multi-horse race in the world.”

For context, Long was 15 years older than the next oldest rider, and over twice as old as a majority of the riders. The youngest competitor this year was only 19.

“Preparation trumps youth,” he told the Times in a post-race interview. That preparation included training with previous winners and riding five horses a day in the months leading up to the Mongol Derby. That came in handy as riders change horses every 40km of the 1,000km race.

But while Long’s maxim held up this year, preparation actually hasn’t trumped youth in the past. The most famous story to come out of the Mongol Derby since its inception is that of Lara Prior-Palmer. In 2013, the then 19-year-old became the first woman to win the race and the youngest person ever to finish, despite entering on a whim (which she writes openly about in her book Rough Magic). She finished in six days and eight hours, while Long claimed victory this year in seven and a half days, according to the Times.

Not to belittle his triumph. Tom Morgan, the race creator, told the Times that Long is now “a legend.” As for the other competitors this year, they suffered injuries ranging from a broken collarbone to a punctured lung.

Long, however, is holding up fine back in the States. His only post-race affliction? According to the Times, “he said that he was getting used to sleeping in a bed again and that his gastrointestinal system was reacquainting itself to American food.”

Watch video of him riding below:

“I’m feeling great & I’m ready to play” • This morning’s words straight from the mouth of 70 year old Bob Long as he made the final gallop towards the finish line of the mighty @mongolderby . • Over the last 8 days, he along with 42 riders from 12 different countries took on the ultimate adventure challenge in the world. They raced a top 28 semi-wild Mongolian horses as they self navigated across 1,000km (600 miles) of everything free and feral Mongolia could throw at them. • Today Bob made history at 70 years old as the oldest person to not only cross the finish line of the @guinnessworldrecords ‘longest & toughest’ horse race but also, HE WON IT. • When asked how he feels about older generations being hesitant to take on challenges, he replied- “age is just a number.” • Tag your friends below to witness this legend and to see history in action watch our footage live from the finish line, now on our Facebook page @mongolderby • 📸 @sarahfarnsworthfieldsports • #mongolderby #mongolderby2019 #horsesofinstagram #horseaddict #builtforthewild @horselovers @practicalhorseman @thegearjunkie @outsidemagazine @theadventurists @riteintherain @yeti @ospreypacks