The upstart series had high hopes, many of which didn't come to fruition, according to documents obtained by The New York Times

In a proposal code-named Project Wedge that was created by Saudi Arabian officials early in 2021, the foundation for what would ultimately become the LIV Golf Series was put together, according to documents that were obtained and reviewed by The New York Times.

Though it didn’t end up coming to fruition, officials wanted the new Saudi golf league to sign the world’s top 12 golfers, including Tiger Woods and Rory McIlroy, and put together a board featuring members from the top levels of business, sports and politics. Among the names on LIV Golf’s wish list was none other than Michael Jordan, per the Times. Joining Jordan on the list were individuals including former IBM chief executive Ginni Rometty and ex-AT&T chairman Randall Stephenson (both of whom are Augusta National members) as well as former Secretary of State Condoleezza Rice and Nike executive chairman Mark Parker.

LIV whiffed on adding Jordan to its board and Woods and McIlroy to its list of players, but the Saudi-backed series was able to land four of the players Project Wedge identified as targets: Sergio Garcia, Dustin Johnson, Phil Mickelson and Henrik Stenson. There’s no doubt that LIV, which is sticking with Greg Norman as CEO despite many PGA Tour backers calling for his removal, will be looking to add more top names after a rocky first season.

As Jonathan Grella, a spokesman for the upstart league, told the Times, LIV’s stakeholders are taking a long-term approach with the business model for the circuit. “Despite the many obstacles put in our path by the PGA Tour, we’re delighted with the success of our beta test year,” he said. “And we’re confident that over the next few seasons, the remaining pieces of our business model will come to fruition as planned. Our business plan is built upon a path to profitability. We have a nice, long runway and we’re taking off.” 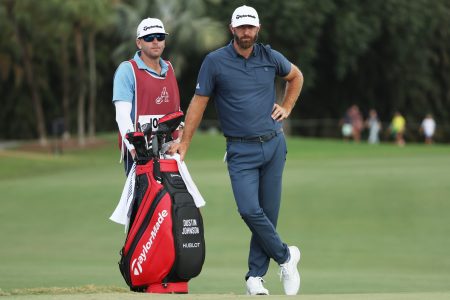 A number of caddies, including LIV champ Dustin Johnson's brother Austin, talked to "Golfweek" about the upstart circuit

Per the documents, building that runway has cost Saudi Arabia at least $2 billion so far and there’s no guarantee any of that money will be recouped as LIV Golf has yet to announce any major broadcasting or sponsorship deals. But given LIV’s true goals, which do not appear to be financial, perhaps that isn’t really a concern.

“The margins might be thin, but that doesn’t really matter,” said Simon Chadwick, a professor of sport and geopolitical economy at Skema Business School in Paris, told the Times. “Because subsequently you’re establishing the legitimacy of Saudi Arabia — not just as an event host or a sporting powerhouse, but legitimate in the eyes of decision-makers and governments around the world.”