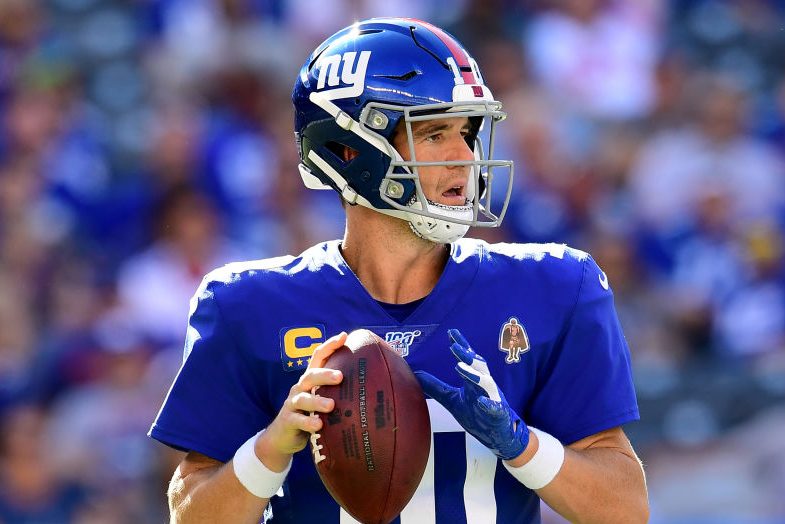 Eli Manning drops back to pass during Week 2 against the Bills. (Emilee Chinn/Getty)
Getty Images
By Evan Bleier / September 17, 2019 12:51 pm

With starting quarterbacks dropping like flies across the NFL (Drew Brees, Ben Roethlisberger, Sam Darnold, Nick Foles, possibly Cam Newton), the Giants announced on Tuesday that they’ll have a serviceable starter riding the bench on Sunday in Eli Manning.

With the team already 0-2 and Manning in the final year of his contract with the Giants, the team is making the understandable decision of going with sixth overall pick Daniel Jones to see what they have in the rookie out of Duke. While it’s a logical move, it also opens up the question of what to do with Manning.

And what now of Eli Manning….

At first blush, trading Manning to a quarterback-needy team like the Steelers or Jaguars (with whom Manning has previously been linked) for picks would seem like something the Giants should consider. And consider it they might, but actually being able to pull the trigger won’t be that easy.

The first reason it will be difficult for the Giants to trade Manning is the amount of money he’s still owed on his contract. Though the team has already paid a good chunk of his $17-million salary via bonuses, the two-time Super Bowl winner is still owed more than $10 million for the rest of this season, according to Ben Volin of The Boston Globe.

As Volin points out, that number would actually be a pretty good value for a team that’s desperate to trade for a quarterback and he’s right. The issue is that, by this point in the season, most teams have already used up most of their available cap space and have very little wiggle room.

If the Giants and a potential trade partner somehow work out the financial details, they’ll then have to convince Manning to leave the only team he has ever played for and start over with a new organization at age 38 as he reportedly has a no-trade clause.

Don’t get sense that Eli Manning wants to go play for another team. Remember this: He has a no-trade clause.

Jordan Raanan, who covers the Giants for ESPN, reports that’s unlikely to happen.

“He has four kids ages 8 and under,” Raanan wrote on Twitter. “He’s made his home in New Jersey. He’s 38 years old and already won two Super Bowls. Lots of reasons to stay in NJ and not chase a ring.”

That doesn’t mean Manning won’t end up somewhere else next season as Sports Illustrated’s Albert Breer reports the longtime Giant has said he wants to play beyond this year.

Where that will be, if anywhere, is up to him, not the Giants.

It's early and emotions are raw, but I don't get the sense that Eli Manning would be willing to waive his no-trade clause now that he's officially not starting for the Giants.

The Giants obviously don't want to trade him, but I believe they'd do it if he asked.

But thanks to Manning’s contract and his no-trade clause, any change in scenery will likely be coming in this summer via free agency, not this season via trade.