Indianapolis owner Jim Irsay is back on the market for a new coach.
Bobby Ellis/Getty
By Evan Bleier @itishowitis

When former Patriots offensive coordinator Josh McDaniels decided to stay in New England after accepting the job as the head coach of the Indianapolis Colts in 2018 and going so far as to hire staff members, ProFootballTalk reported that he got cold feet because he “had concerns” about working with Indianapolis owner Jim Irsay.

“PFT had heard in recent days that McDaniels did indeed have those concerns, but that efforts were made to persuade McDaniels to make the leap of faith,” per PFT. “He did so reluctantly, and then he didn’t. And now, as one source put it to PFT, there will be a ‘major storm of shit’ over this one.”

Now, approximately five years later, we’ve received a report that storm of shit may have been caused by Irsay taking too long in the bathroom during a visit with McDaniels and his family at their home in Massachusetts. 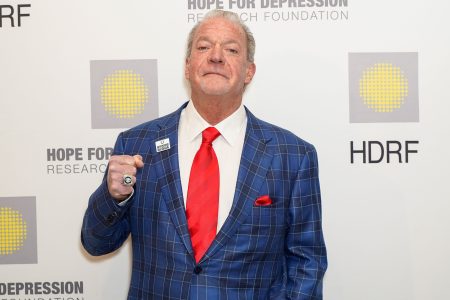 For Snyder to be ousted, 24 of the league's 32 owners would need to approve it

Per NFL insider Dan Dakich and his “great” sources within the Colts, Irsay spent “close to an hour” in the restroom and freaked out McDaniels’s wife Laura with other strange behavior during his visit. “‘McDaniel’s [sic] wife made him pull the plug after having Irsay in their home in Massachusetts & observing his odd behavior,’” Dakich wrote on Twitter, citing an unidentified source. “‘Behavior that included being in the McDaniel’s [sic] family bathroom for a very long & awkward period of time.’”

Dakich did not elaborate on what Irsay was allegedly doing that was so odd or why he was in the bathroom for such a long time, but an easy assumption would be that the alleged behavior was somehow related to drugs or alcohol. In 2014, Irsay was arrested after a police officer spotted him driving erratically and various prescription drugs were found in his vehicle along with more than $29,000 in cash. Irsay later admitted to a judge that he was under the influence of the painkillers oxycodone and hydrocodone when he was arrested. Following a stint in rehab, Irsay pleaded guilty to a misdemeanor count of driving while intoxicated and was ordered to submit for drug testing and abstain from drinking alcohol for a year. By 2018, that year would have been up.

For what it’s worth, Colts general manager Chris Ballard said he never got an explanation about why McDaniels backed out of the job in Indy. “I didn’t want the explanation. Either you’re in or you’re out,” Ballard said. “That’s his prerogative and that’s his choice. He chose not to be an Indianapolis Colt.”

Now, if Dakich’s rumor is correct, perhaps we know why.