Why a “Lava Tornado” Shouldn’t Deter Your Hawaiian Travel Plans

From active volcanoes to stunning waterfalls, Hawaii has the right terrain for your vacation.

These past few months on the Big Island of Hawaii have been literally earth-shattering news.

On May 2, Kīlauea awoke. Lava spurts shot up 125 feet into the air in Leilani Estates, prompting mandatory evacuations for over a thousand people.

Kīlauea is an active volcano that has been erupting continuously since the 1980’s, but this activity is a far cry from the normal burbling lava flows.

The volcano has triggered thousands of earthquakes, including a 6.9 that was felt islands away – even in Honolulu, where I was visiting. Officials were correct in their prediction that no localized tsunami ensued.

Some residents attribute the volcanic activity to Pele, the Hawaiian Goddess of Fire. According to legend, Pele lives in the Halema’uma’u crater, inside the Kīlauea caldera.

The molten lava flows met the Pacific Ocean and created a toxic “laze” cloud (lava + haze), which occurs when lava boils the seawater into an acid gas steam infused with volcanic glass particles. The U.S. Coast Guard warns people to stay away from the deadly “laze.”

Explosions continue, including a “lava tornado” this past week, spewing molten rock in all directions. Airlines are on high alert, and the United States Geological Survey alert level fluctuates between orange and red, warning that “eruption is imminent.”

Keep your wits about you and follow the news for any spikes in action. From fissures to lava bombs and toxic gas plumes, there is never a dull moment in Hawaii. 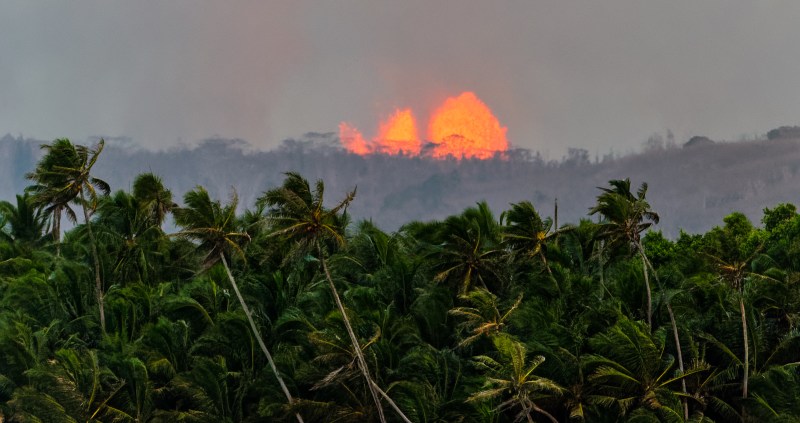 Lava erupts from Fissure 8 Fountain in Leilani Estates as seen from the Kapoho coast of the east side of the Big Island of Hawaii on May 31, 2018 in Pahoa, Hawaii. Lava produced from this fissure reached heights of 270 feet according to geologists. The Big Island, is one of eight main islands that make up Hawaii state, is struggling with tourist bookings following the Kilauea volcano eruptions, with summer bookings at the island down 50 percent. Officials stress that the eruptions have thus far only affected a small portion of the island. (Don Smith/Getty Images)
Getty Images

Where It All Began

Despite its active volcanoes, Hawaii holds a special place in my heart.

When I graduated college, I packed all of my worldly possessions into two suitcases, put my newly acquired red VW Beetle onto a barge, and moved across the Pacific to this tropical archipelago.

As the plane descended into Honolulu, I wondered what I had gotten myself into. Silver high rises and six-lane freeways? I had only ever been to Maui, and was expecting pristine landscapes and rural, small-town Hawaii.

I soon learned that these idyllic surf towns were a short drive away down the Leeward coast or up to the North Shore, where all the famous surf competitions are held each winter. 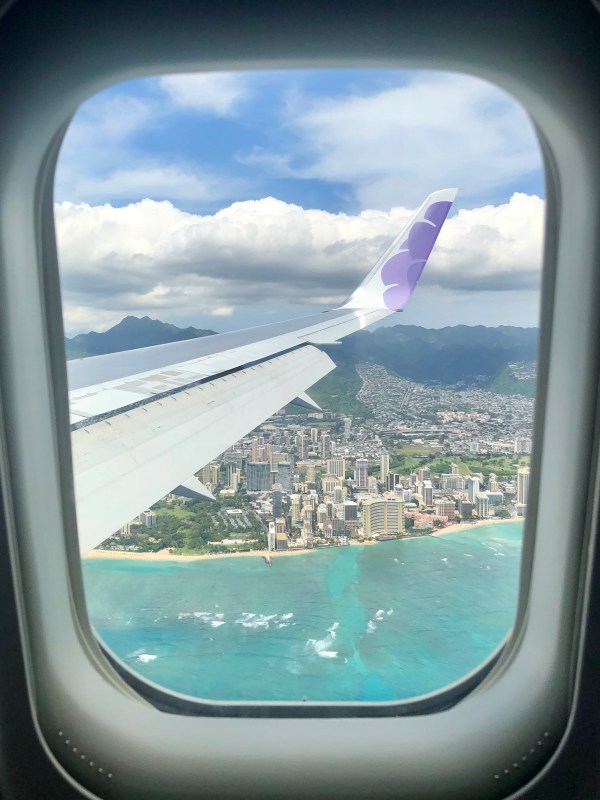 View of Honolulu from above (Sally Sorte)

I was a Teach for America corps member slated to teach high school English in Ewa Beach. Despite its postcard-perfect image, Hawaii is not immune to the achievement gaps and teacher shortages that afflict disadvantaged urban and rural communities across the U.S.

My 9th grade students were primarily Filipino and a beautiful cross-section of Pacific Islander backgrounds. We read the aptly themed Lord of the Flies, analyzed Shakespeare, and composed slam poetry. Students walked down the hallways strumming their ukuleles, eating spam musubi (a relic of military occupation).

This year, our annual trip was preceded by record rainfall in Kauai. Almost 50 inches fell in a 24-hour time span, flooding the entire north shore, covering it in mudslides, and prompting hundreds of emergency evacuations.

Kauai is still a dream to visit. It is the least developed of the main Hawaiian Islands, so you will get your daily dose of lush green. According to color psychology, green brings equilibrium and peace (hence why artists center their mojo in a ‘green room’ before taking the stage), and that was exactly how we felt while we were there.

The North Shore was still recovering from the mudslides – normally crystalline waters were turned to chocolate milk – but we enjoyed an epic sunset from the St. Regis in Princeville. (The Beach House on the south shore is the other prime sunset spot.) 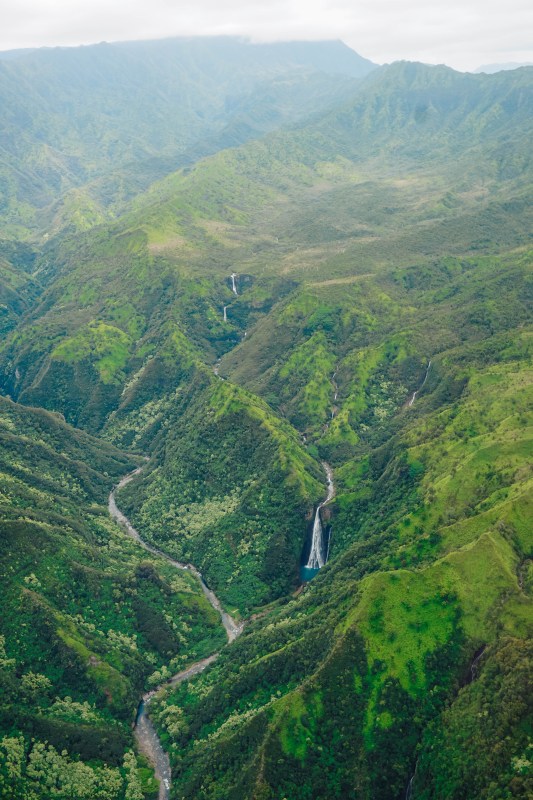 The Kalalau Trail was closed due to the floods. Luckily, we backpacked the whole trail right before we moved off the islands back to the mainland. It is one of the top 10 most dangerous trails in America according to Backpacker Magazine, but if you’re up for an adventure and want to connect with Jurassic Park beauty, I cannot recommend it highly enough. 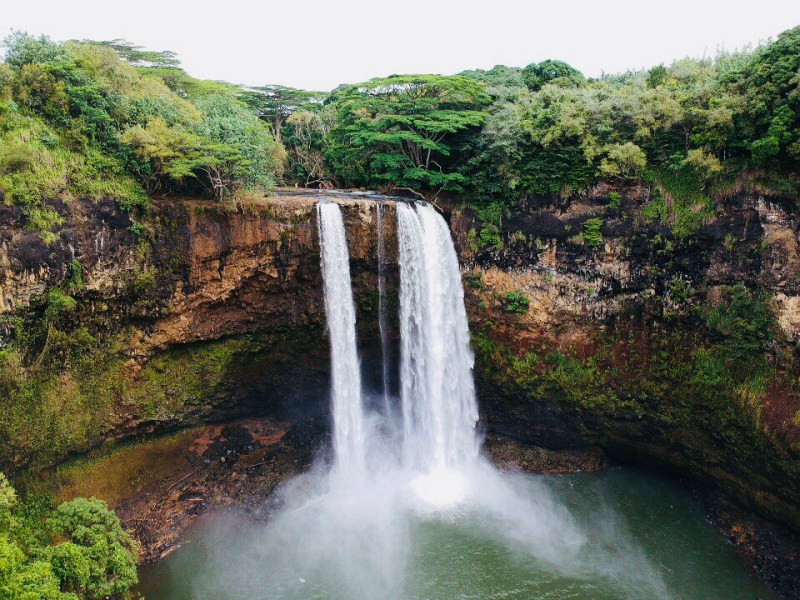 We got our fill of the iconic Na Pali cliffs from the air with Wings Over Kauai. Our pilot, Captain Doug, regaled us with 15 years of pilot life stories and all the insider info on the island’s history and impressive geology. You haven’t really seen Kauai until you’ve seen it from the air. 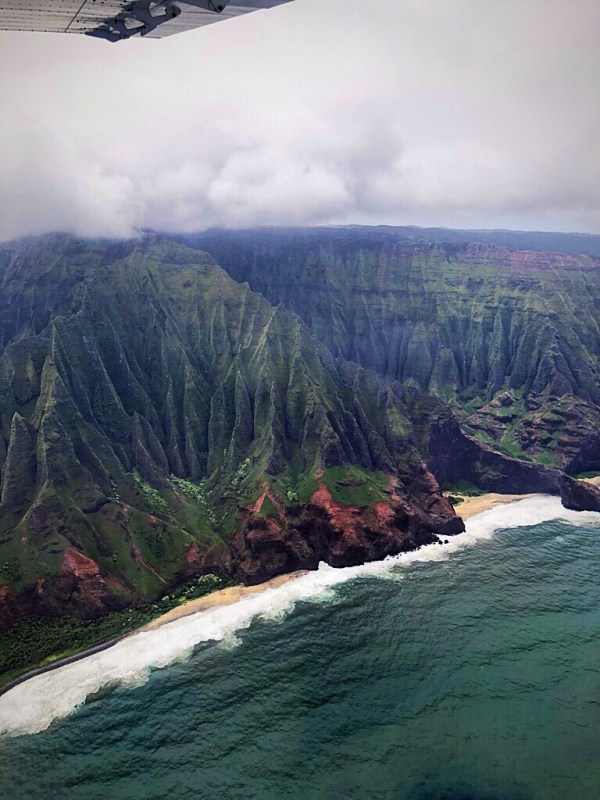 Kauai At A Glance

Here are some highlights to check out on your next trip to this verdant wonder:

* Hike the Kalalau trail. It’s an out and back hike, so you can do the first few miles at your leisure. Turn inland at the 2-mile to get to Hanakapi’ai Falls, which turns into an 8-mile round trip hike. If you plan to backpack the whole thing, do your research, prepare your survival supplies, and apply for a permit in advance.

* Take Flight with Wings Over Kauai to get up close and personal with the impressive mountains, canyons, and waterfalls of the Garden Isle.

* Sunset drinks at the Regis on the north shore or the Beach House on the south shore.

* Cliff Jump at Shipwrecks Beach near Poipu. Be sure to keep an eye on the tides and practice all recommended safety precautions.

* Snorkel at Ke’e Beach on the North Shore. Bring some fresh ahi poke and cold beers, as this is another great place to watch the sunset. 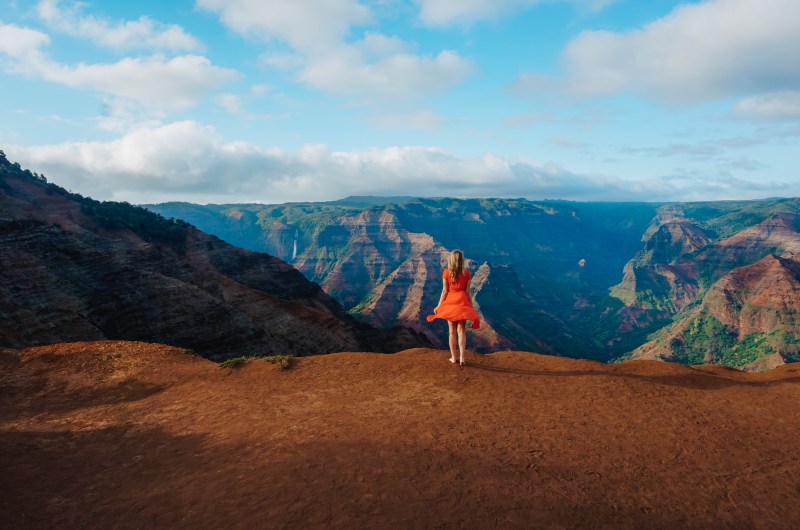 We can’t go back to Hawaii without spending time on our old home turf: Oahu. Oahu is best known for Waikiki and epic North Shore surfing, but it also has incredible culture and charming beach towns.

On May 1, the mainland celebrates “May Day.” Neighbors leave flowers on one another’s doorsteps and run away before the recipient can see who left the fragrant bundle.

In Hawaii, May Day is known as “Lei Day.” It has become a prominent holiday of lei competitions, flower displays, and a celebration of Aloha- the joyful sharing of life energy or breath “HA” for which the islands are named.

We took the Lei Day celebration of Aloha to the next level by holding our sunrise nuptials in Kailua, the place we fell in love ten years ago. It was a small, intimate exchanging of vows, with the judge and our parents.

While we have larger celebrations queued up for the Pacific Northwest and Denver later this year, it was special to hold our official marriage in a place that was meaningful to us, taking us back to where it all began.

Other highlights of our week on Oahu included our first visit to the Byodo-In Temple, shopping for fresh produce at the Farmer’s Market, and a fragrant hibiscus bath by Pamakane, AKA Ocean Dreamer. 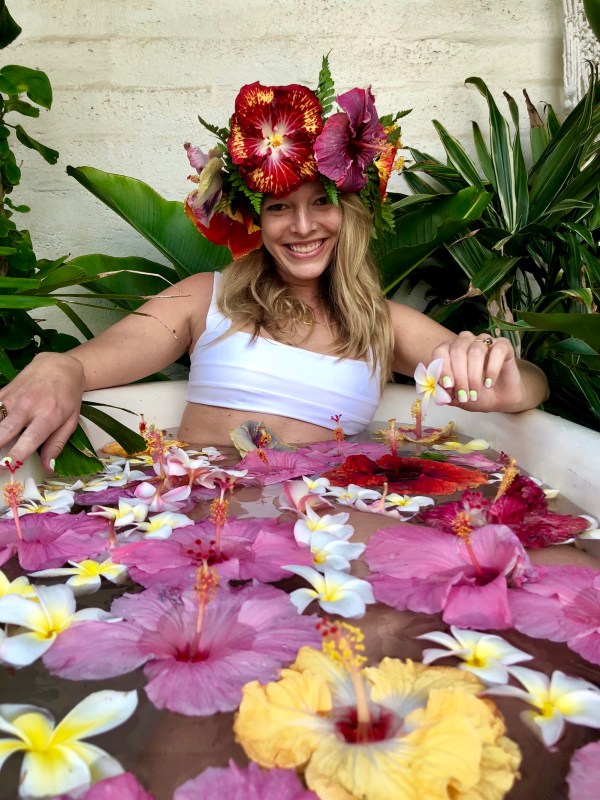 Soaking in the Aloha of the Hibiscus Love Tub (Sally Sorte)

Oahu At A Glance

Be sure not to miss these Oahu hot spots:

* Hike the Lanikai Pill Boxes. Or, if you want something closer to Honolulu or Waikiki, check out Diamond Head or Manoa Falls.

* Luau – If it’s your first time to Hawai`i, be sure to book a luau to enjoy traditional Hawaiian foods and Polynesian dancing. Luaus are perfect for couples or the whole family.

* Spread Aloha with stunning hoku flower crowns and handmade leis from Pamakane, who has been making leis since she was five.

* Surf the easy beginner sets in Waikiki, or at White Plains beach on the Leeward side. If you are a newbie, sign up for a lesson.

* Beach time is always a good idea. Adventure up north to Waimea Bay, which offers cliff jumping and a spirited shore break. This is where the Eddie Aikau surf competition is held when open ocean swells reach 20 feet, breaking at a whopping 30-40 feet in the bay. Hence, heed the high surf warning flags, especially in the winter.

* Eat Like a Local – Fresh ahi poke, malasadas, and shave ice are Hawaiian staples. The Plate Lunch – a result of the multiple nationalities working together on plantations – is also a classic. Kalapawai Market in Kailua is my favorite for a nice dinner sourced locally, or check out First Fridays in Chinatown for some art and a Lychee martini. 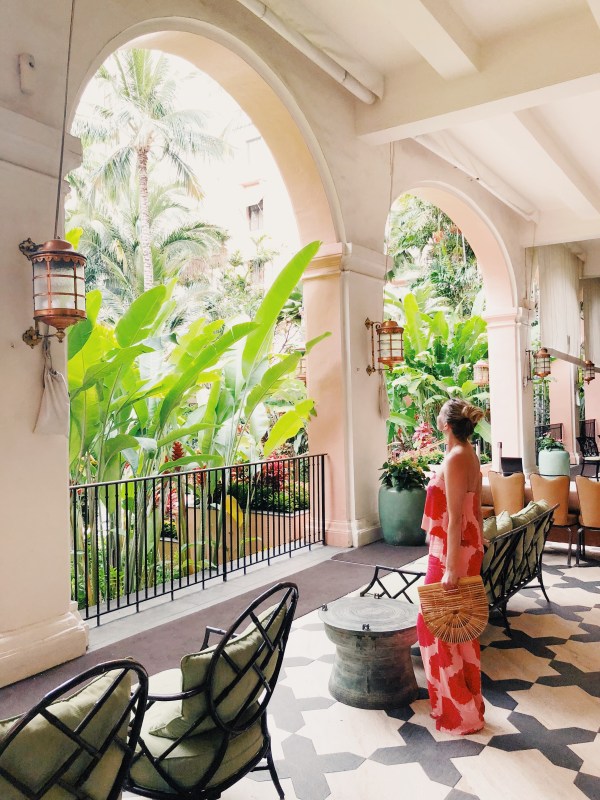 The Aloha spirit is truly palpable on the Hawaiian islands – so whichever island you choose – you really can’t go wrong. Aloha!

How to Drink (And Make) the World’s Deadliest Cocktail

The Fall of Best Made: Why the "Fancy Axe" Company Was Sold for Parts

Remembering the "Hipster" Bars That Built Williamsburg as We Know It

How to Drink (And Make) the World’s Deadliest Cocktail
Banksy’s Foolproof Plan for Dealing With Anyone Who Steals His Art
The Fall of Best Made: Why the "Fancy Axe" Company Was Sold for Parts
Remembering the "Hipster" Bars That Built Williamsburg as We Know It
Larry David Reveals His All-Time Favorite “Seinfeld” Episode
Elvira Is Staying Home for Halloween This Year