Exploring the Fjords of Norway

You can find fjords in New Zealand, Alaska, Scotland or Chile – but that gorgeous blend of mountain and sea is forever wed closely and uniquely to the rugged land of Norway. The natives who live and work amongst that country’s 1,190 fjords create a relationship with the waterways’ unique characteristics that define people and geography alike.

A recent journey through Norway to test drive the new Range Rover Velar offered a rare opportunity to explore the country’s waters and their native sons and daughters. For four days, surrounded by picture postcard vistas at every turn, the elegant SUV carried this reporter over roads and bridges, from ferries to mountain passes — unveiling how the collective character of the Norwegians is forged by these glacier-chiseled inlets. The route Range Rover laid out for me offered a chance to hear the words of locals who live on and earn their income from the fjords. 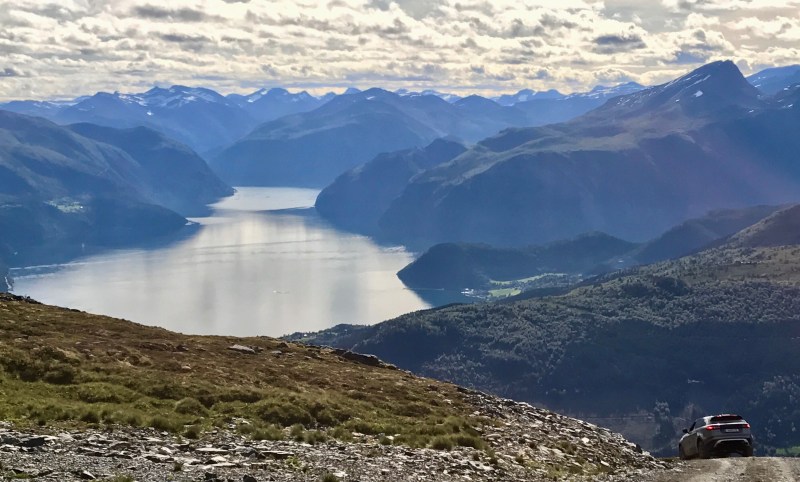 There are more than a thousand fjords in Norway, all along the coast. (John Scott Lewinski)

With mountains rising to protect the waterways between them, Norwegian fjords can offer prime fishing conditions for the amateur angler or the professional harvesting the sea. Harbor towns like Alesund flourish on fishing and tourism. Norseman began the seagoing tradition in open, rowed long boats centuries ago, and today’s Norwegians evolved to using 50-yard vessels like the proud ship of the Dyb family. Carrying a crew of 20, the ship holds what no ancient Norseman could imagine — a woman with dreams of becoming a captain.

“I’m the first female in my family to be on the boat,” says Tonje Dyb, 25, a fisher and first mate with a degree in nautical science. “I don’t think there has been a woman captain on a long liner before. I want to be the first.”

“Some older crew aren’t used to a young girl coming on board and doing the same job as them. But, I’ve shown I can do it and everyone accepts me. The work is still hard but technology has made it easier and safer. You still battle the elements, but you do it with better equipment.”

Away from the fishing boats, the layout of Norway’s coastline and its more than 50,000 islands carve out fjords far too wide for a bridge to connect surrounding roads. So, more than 100 car ferries operate daily service. Locals take multiple rides during their work days with the ease of New Yorkers riding the R Train or San Franciscans hopping street cars.

According to Innovation Norway, more than 8 million passengers rode its ferries last year. With comfortable seating and a full-service breakfast and lunch counter onboard, public transport can serve as a break in a commuter’s day.

Torgeir H. Hoyset is the Chief Mate on the Fjord1 Magerholm–Sykkylven ferry. He believes he was destined to serve aboard the boat and enjoys the best seat available from the bridge.

“I’ve been doing this all my life.” Hoyset explains. “When I was a kid, I would stand at the dock and watch the ferries come and go. It would fascinate me, and that’s when I knew what was going to do.”

“No paycheck could replace this job. There’s just something about riding on the ferry. On a beautiful day, you can watch commuters gathering on the deck because they realize traveling this way is something special.”

The Range Rover Velar drew its fair amount of attention onboard the boat, but it didn’t stick around long as one of the great driving roads in the world waited nearby. The Trollstigen (Troll’s Ladder) runs through the mountains between Andalsnes and Valldal, curling 2,800 feet up a 10% incline with 11 tight turns. Running past Stigfosen Waterfall, the “Troll’s Road” is only wide enough for two narrow lanes — and there’s nothing between the driver and the valley floor than tire rubber and driving skill.

At the top of the thrilling road stands the Trollstigen Gjestegard and Cafe – an angular structure of stone and lumber offering sprawling views of the road and the distant fjords. Edmund Meyer is the cafe’s owner and manager, having built the original, more modest version himself before the larger structure took its place.

“Here we have wind, water and rocks. If there’s one place in the world that trolls really come from, it’s here. The mountains are tough and jagged, and you can nearly see trolls walking around.”

This driver spotted no trolls, distracted by a country of countless stunning, stirring scenes that made it next to impossible to take a bad picture. The outsider might expect the locals to take all that for granted after seeing Norway’s beauty every day. But, a trek through the fjords proved that is never the case.