Just footsteps from Nationals Park, the Thompson is the latest jewel in a burgeoning hotel scene 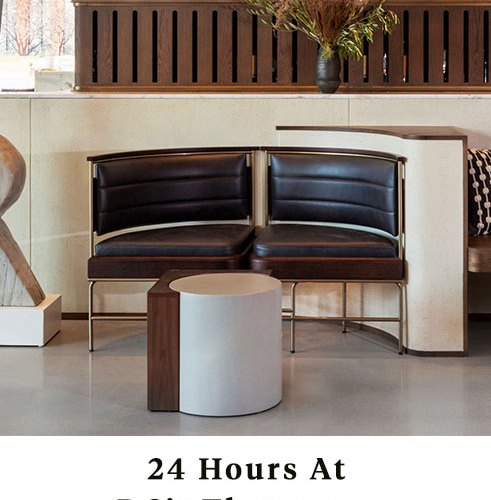 Once a city that only seemed to host hotels that opened up while Teddy Roosevelt was still in office, the DC lodging scene has gotten a serious facelift in recent years. Hip new areas like the District Wharf have been under constant development, and the arrival of a world-class hotel is often the cherry-on-top that seals a neighborhood’s ascent to being a destination in and of itself.

The area around Nationals Park is no exception to that rule. In November, Amazon purchased an apartment building nearby for a cool $161M, and around the same time construction finished on a mixed-use development with ballpark-facing apartments, a vegan chain and a ramen shop. A slew of new food and beverage options followed, including a Union Kitchen Grocery, Compass Coffee, Cold Stone Creamery, Atlas Brew Works and Gatsby.

In the middle of all of this is the freshly opened Thompson Hotel Washington, DC, part of a new hotel group by Hyatt. Sitting practically across the street from Nationals Park, it’s a development so promising that it sold less than two weeks after opening to a German business investor in a nine-figure deal. Curious to learn whether it’s the best hotel of an increasingly busy bunch, I decided to spend a cool 24 hours inside to review everything on offer.

My partner and I pull up to the Thompson Hotel for a late check-in, having just driven four hours down from New York City. Driving through the Navy Yard, I was blown away by just how much the area had changed, from sleek high-rise condominiums to empty plots foretelling future construction to the hotel itself, which is footsteps from Nationals Park. We give our keys to the valet and stroll inside.

The hotel’s vibe is extremely modern with plenty of artsy touches and a vaguely nautical motif: plenty of muted tones and smooth wood. The scene in the lobby bar is convivial and lively, with so many people talking and laughing that I almost feel inclined to join. But I have a room to check into; we encounter some futuristic monitors in front of the elevators that tell us to enter the far-left door to head up to the 8th floor.

Walking from the elevator to our room, we’re taken by the navy and white carpet lining the halls. It’s beautiful, if only a bit inconvenient for a rolling bag. Our room is moody and dark like a captain’s cabin; wood built-ins line the walls and the room is punctuated by statement pieces like a full length, self-lit mirror with rounded edges as well as a murphy-style desk right by the window — the perfect place to get some late-night or early-morning work done.

Let’s not forget the most noticeable accent of the room, though, the doggy bed. Yes, my partner and I travel with her pomeranian, and the Thompson made it very clear to us that they are indeed a dog-friendly hotel. A large navy blue dog bed awaits him, as well as silver food and water bowls and a green ball. The touches are all appreciated.

We decide to take a tour around the hotel to take it all in, starting back downstairs in the lobby. I learn about the hotel’s architecture (by international firm Studios Architecture) as well as the interiors (by award-winning firm Parts and Labor Design). The aesthetic is supposedly inspired by the historical Navy Yard that surrounds us.

“The guestrooms celebrate the idea of a ship’s cabin, as the team wanted to create a tranquil place of relaxation that didn’t exclude the importance of work,” says Sherry Abedi, the Thompson’s General Manager. “Since the hotel is a new build in a historic area that’s right on the water, the team’s goal was to create a destination for travelers and locals alike and provide them with a space to come together but also to give DC a well thought-out and curated design experience that doesn’t appeal to just one demographic.”

The lobby is Abedi’s favorite spot thanks to the details that make it an ideal gathering space. There are large soaring windows and several areas for small groups to gather, as well as places where solo travelers can feel part of the mix. The two custom sculptures in the lobby are by Nashville artist Kit Reuther.

The elevator doors open and we enter Anchovy Social, the hotel’s hip rooftop bar that opened less than a week ago. Now we really feel as if we’re inside the hull of a ship — a feeling that I certainly didn’t mind. The space is larger than expected and anchored by a grand bar; bottles of booze are displayed inside alcoves on the back of the tiled bar. When the weather permits, the bar will be indoor-outdoor, with patrons invited to take advantage of a wraparound view of Nationals Park and the Anacostia River via an outdoor patio with casual seating.

Before we know it it’s time for dinner, and we have a reservation downstairs at Maialino Mare, the Thompson’s Roman-style trattoria. Entering the space it was hard to know where to look first: the high ceilings, the long bar with an eye-catching wood-and-glass light fixture hovering above it, the banquette seating and plants galore on the other side of the room. We check in with the host and are informed that they’re getting our table ready.

My partner takes advantage of the short window of time to take the dog back up to our room. While service dogs are allowed in the restaurant, we decide it’s probably best for him to hang up there. She returns and we’re almost immediately ushered to our table, walking past the bar and banquette seats to a four-top bedecked with a blue-and-white checkered tablecloth.

We arrived at Maialino Mare positively starving, so a quick glance at the menu and some eager recommendations from our waiter lead us to dishes like crispy baby artichokes and pulpo (octopus) with soft, almost creamy fingerling potatoes. We share everything, including a briny pasta dish with ruby red shrimp and the piece de resistance, a salt-baked sea bass for two. After a cocktail each we make it known that we want to order a bottle of wine and the sommelier comes over with three choices based on what he believes will pair well with our meal. Our pick is the kind of crisp white that’s best served seaside — it goes perfectly with the sea bass.

After devouring several plates of food and draining our bottle of wine, the check arrives. What we didn’t expect was the exclusion of one of the most signature parts of paying for a meal: the tip. The restaurant, as it turns out, participates in a revenue share and is non-tipping. This, alongside the delicious food and friendly service, lead me to believe that Maialino Mare might be one of the best new fancy dinner-date spots in town.

We’re back up to our room and tucking in for the night. After a long day of driving (and attending a baby shower in the afternoon) I’m grateful for a hot shower, a soft robe and being able to roll myself immediately into our king bed. I am pleasantly shocked to see that the complimentary bath products are made by a small Brooklyn-based perfume house called D.S. & Durga — the same guys who make my cologne.

I’m up and already trying to stuff clothes back into my suitcase to make time for a proper breakfast before the day gets started, keeping in mind that we have spa appointments across town at 11. I call down to the lobby and request a late checkout so that we can keep the dog in our room until after we return refreshed and ready for the drive back. They extend our checkout to 1 p.m.

We’re back at Maialino Mare and the change in mood from last night’s dinner is, well, like night and day. Even though the weather is predictably overcast, floor-to-ceiling windows allow for light to brighten up the entire dining room — the penultimate ingredient I need for maximal morning alertness. Next comes the final one, coffee.

Our seating at a long, pleated black leather booth is much cozier than our dinner table and perfect for breakfast. Our order of burrata with toasted focaccia comes alongside a fried egg and sausage sandwich atop a pecorino biscuit. We scarf it down while someone from the bar comes to say hello to our dog. Before we know it he’s back at our table with the pastry chef, a dog-lover himself who brings over a freshly baked treat. The dog could get used to this.

We’re back a bit late arriving back, so my partner grabs the bags while I take care of business at the counter. The host and I chat about all the dog amenities and the fact that a greenspace is being built across the street from the hotel, to be completed in the next few months. The park, I’m told, is going to be a beautiful recreational space for both guests and the public to enjoy. We also chat food, and before I leave he grabs me a copy of the latest Washingtonian to read on the drive back to New York.

You don’t have to be an avid traveler to know about Hyatt, one of the largest hotel groups in the world. Similar to its competitors Marriott and Hilton, Hyatt has an entire suite of smaller hotel brands, such as the ritzy Park Hyatt or more affordable Hyatt Regency. Then, there’s the Thompson brand, which it acquired in 2019.

Focused on modern luxury, Thompson seems to be in a category entirely its own. They’re not the kind of hotel that’ll set you back thousands of dollars, and you certainly won’t feel as if you’re walking around a museum or tip-toeing through a presidential library. I loved that about the Thompson DC: the interiors were design-forward and thematic, but the lively atmosphere and friendly staff kept the mood light at all times. Add in a fantastic Italian spot and a rooftop bar and I’m sold.

Close attractions like Nationals Park, the waterfront and the Anacostia Riverwalk Trail mean there’s plenty to do in the area. Once their greenspace is complete and construction in the area slows down, I’d be willing to bet that the hotel will be as much a local hot spot as it is the perfect place for an upscale business traveler.