Is There Anything Under the Surface of Ryan Murphy’s Shallow Showbiz Utopias?

With "Hollywood," the "Glee" and "Pose" showrunner demonstrates a troubling return to form 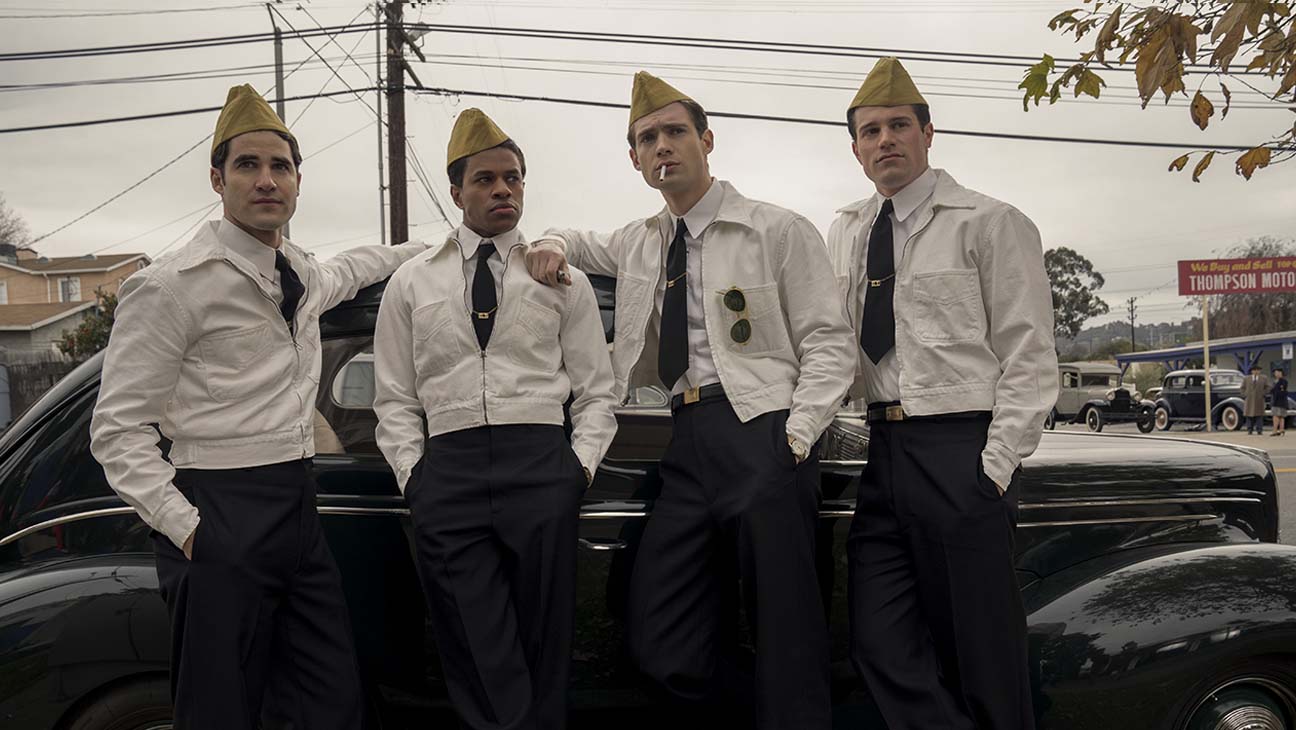 If there’s one thing this critic appreciates about the TV work of Ryan Murphy, it’s that the man often says exactly what he means, which makes his shows easy to write about. In his new series Hollywood, for instance, the ensemble of starry-eyed dreamers crisscrossing postwar Tinseltown often state the themes of the script in story-tall letters studded with flashing light bulbs. “Movies don’t just show us how the world is,” says Darren Criss in his role as an ambitious upstart director passing as white despite his half-Filipino heritage, “they show us how the world can be.” That’s the entire weltanschauung of Ryan Murphy, no nutshell necessary. To quote the great scribe and bard Garth Marenghi, “I know writers who use subtext, and they’re all cowards.”

Criss’s statement, and the following episodes’ painstaking realization of it, represent the culmination of a grander project from Ryan Murphy stretching back over a decade. Hollywood, 2017’s Feud and the six-year juggernaut Glee (not incidentally, Murphy’s first collaboration with Hollywood co-creator Ian Brennan) form a loose trilogy laying out its authors’ vision for a revised showbiz industry. All three series confront the central questions of what type of person gets to be famous and why, though it might be more accurately said that the shows ask, “Why not?” Murphy and Brennan imagine an equal-opportunity sharing of the spotlight, under which their egalitarian spirit can overpower all of society’s many iniquities. People conduct their lives in accordance with what they learn from pop culture; fix that, and all the undesirable -isms of the real world will follow suit.

This is of course not how life works, which is to say that’s not how art works. Hollywood clarifies Murphy and Brennan’s conjoined view of what purpose moving pictures serve — specifically that they’re purposeful in the first place. They posit show business as a means to an end, a thing that does a thing rather than a thing unto itself. This insight throws the recurring, foundational flaws of the corpus they’ve built together into sharp new relief. They’ve spent the past decade promoting the idea that if art does good, it will be good, a notion that has now come crashing down all around them.

Hollywood marks the first time that a Murphy-Brennan creation has put the writers’ principles into practice in such an explicit, one-to-one capacity. The show takes a panoramic view of ‘40s Los Angeles as a dirty business, from the unsavory sexual bartering on casting couches to the unsavory sexual bartering in hotel rooms. A starry-eyed ensemble of dreamers bursts onto the scene as a corrective to the institutional rot, not just in terms of sex as currency, but for the dozen or so prejudices that dictated studio doctrine at the time. Criss’s aforementioned Filipino director, a gay black screenwriter (Jeremy Pope) and a black ingenue (Laura Harrier) literally rewrite the script with their plans for a game-changing movie based on the life of Peg Entwhistle, an actress who infamously leapt to her death from the Hollywoodland sign. They want to tell their story, their way, and for hard-to-discern reasons (primarily gumption, it would seem), the studio decides to buck all convention and throw their weight behind diversity. As many have eloquently noted, this makes the truly wild insinuation that those oppressed back in the day should’ve just tried harder not to be.

All the same, it provides us with a window into the inner workings of Murphy and Brennan’s process. They see the telling of Peg’s story as the highest calling art can answer, in that it gives a voice to the voiceless. That goes for Peg herself, whose pain will ostensibly be splayed all over the silver screen for public consumption, as well as the production personnel, who can convey their perspectives theretofore discriminated against. As the characters repeatedly state in a self-congratulatory finale that lavishes this fake movie with fake Oscars, little black kids and Asian kids and queer kids will be able to see someone like themselves up there, and boy will they be moved.

This platitude only holds water when considering art as the thing-doing-thing described above. Any closer inspection of the movie they’re making opens up a chasm of potential criticisms suggesting more thought put into the general outline of a work than its finer points. To wit: Criss’s character has a meeting with the studio head in which the top brass pushes back against the film’s proposed downer ending. Fine then, Criss reasons, what if she didn’t jump off the sign, and instead climbed back down to live happily ever after? Rather than a betrayal of one woman’s memory, this is passed off as justice on a historical scale.

Give the matter some thought, and it’s very obviously wrong to overwrite the actual inner torment the real Peg Entwhistle faced with a sanitized version of the same. That goes double considering that they recast the white character with the black actress played by Harrier, whose difficulties wouldn’t have been so tidily resolved. They’ve short-changed her anguish and, ironically enough in light of the race-flipped casting, whitewashed her as a tragic figure. But in the show’s universe, this is an unalloyed good, because it has provided American viewers with a positive image of marginalized groups thriving. Art exists only insofar as it affects the people who watch it. Murphy and Brennan start with the praise they’d like to receive and work backwards.

All that matters is the net gain of morality presumed by the writers, while it’s best not to think too hard about the implications of what they’ve written. The case study exemplifying this doctrine would be Glee, a show content to spread good while being bad. There’s no denying that the long-running series — revolving around the show choir of McKinley High — meant a lot to a lot of people who needed it; the steady ratings and scores of screaming kids at the many live concert tours prove that much. In this respect, as far as Murphy and Brennan are concerned, the show was a great success. A critic would be duty-bound to say otherwise.

The show assembled one of the most widely representative casts the TV medium has ever seen: every race, gender, sexual orientation, body and belief system got a moment in the spotlight. The efforts to service the varying points of view, however, often lacked the elements that make delicate social commentary work — little things like subtlety, nuance or just emotional honesty. “Subtlety and nuance” has not always been the purview of musical comedy, but even so, this series wanted to take on heavier subject matter than usual for the genre.

I often think back to the Very Special Episode in which belter Rachel Berry (Lea Michele) has a dalliance with bulimia, and gets caught with her finger down her throat by the school guidance counselor. Nothing’s coming up, and the girl speculates that she may not have a gag reflex, to which the counselor replies that that may be a valuable asset later in life. Rimshot! It is a shocking distasteful moment for this off-color joke, made only worse by the speed and simplicity with which Rachel snaps back to normal. One talking-to, and blammo, problem solved. In the abstract, it’s beneficial to the public good, because a light has been shone on the continuing scourge of eating disorders. But as art, with meaning unto itself determined by form in addition to content, it has utterly failed.

Feud operated from the same self-proclaimed ethical high ground, attempting to spread its goodwill to a demographic underserved in Murphy and Brennan’s previous works, namely “middle-aged women.” The show sought to do right by Bette Davis and Joan Crawford, stars of What Ever Happened to Baby Jane? and dual bulwarks against ageism and misogyny. This show stands out as their clear best in part because they’ve got a factual record to work from, and in part because it’s got a story to tell instead of a message to send. Bette and Joan make for rich characters, and this episode of their lives contains its own rhythms, ironies and metaphors. The heavy-handed histrionics about how goddamned important this all is, the killer that always drains the life out of Murphy/Brennan collaborations, never comes. One isn’t forced to imagine the grateful aging movie stars tearfully thanking the showrunners for their valiant service.

Murphy’s weirdly utilitarian stances on what art is for have their precedents, though they come from equally weird places. Soviet-era silents and toddler programming both couch narrative in imperatives to ideological action, and like them, Hollywood bears the faint flavor of propaganda — not that there’s anything wrong with that. Propaganda that moves a person to goodness can claim the cover of art-as-activism, the exact terms by which Murphy often described his series Pose, another effort to widen the profile of celebrity. But his drastically uneven body of work stands as an illustration of how uncomfortably virtue and creative integrity can coexist. Murphy and Brenna have built a grand vision of Hollywood, and yet it’s every bit as false as the one they’re trying to bulldoze.