F.E. Castleberry and His Gang of Stylish Misfits Are Breathing Fresh Life Into Menswear

“We're all flawed. We're celebrating that in a funny, whimsical way.”

"Hey man, if you're an outsider, this could be your club." - F.E. Castleberry
Joan LeMay for InsideHook
By Jason Diamond @imjasondiamond 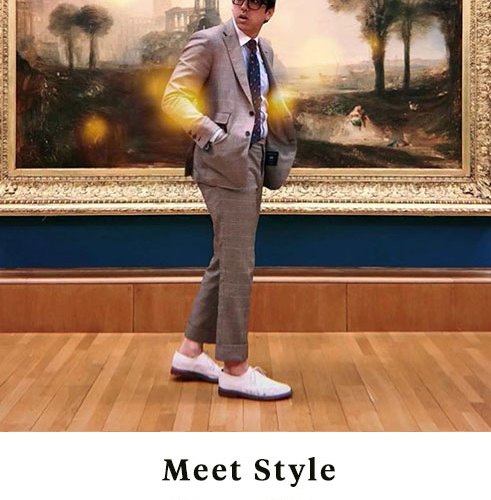 Welcome to The Age of Influencer, InsideHook’s look into the real lives of people we follow on YouTube, Twitter, Instagram or whatever form of social media we’re currently obsessing over. In this installment, we speak with F.E. Castleberry about growing his own band of well-dressed outsiders into a bourgeoning fashion powerhouse.

The phrase “sex sells” has been around for as long as I can recall. And while I know there’s not much good trying to deny that fact, we often underestimate story as an equally reliable driver when it comes to getting people interested.

Take Gucci’s spring/summer collection for 2019. Using the 11th Duke of Devonshire’s “comedy jumpers” from the middle of the 20th century for inspiration, one of the most famous luxury brands in the world had to explain the meaning behind a model wearing a sweater with “Never marry a Mitford” on it and why people should be willing to shell out four figures for one. In 2018, in hopes of recapturing some of the old magic, Abercrombie & Fitch didn’t reach out to Bruce Weber to shoot half-naked young people; they dug into their archives and put out a line inspired by one of their most famous clients, John F. Kennedy. And then you’ve got the style world’s most famous storyteller, who built an empire on a fantasy: the man about town, the well-dressed cowboy, the New England WASP who is actually a Jewish guy from the Bronx, Ralph Lauren.

F.E. Castleberry understands that better than just about anybody operating within the world of menswear right now. “To tell you an effective story, you’ve really got to slow it down a little bit,” he says over tea at Soho Diner in Manhattan. That idea boils over into the philosophy behind everything he does: “So for me, when I’m talking about my brand, I’m not changing the concept every season. I’m on message: the better you dress, the worse you can behave. That’s it. That’s the lens. That’s the reason to get dressed up, so that you can be extended social graces. Get away with stuff. Trespass, cut a line, do whatever. Do you know what I mean? It’s just like, you can use any bathroom in any hotel in New York if you’re in a suit.”

Castleberry first caught my attention a little under a decade ago, during the boom times of #menswear, when Tumblr blogs paraded around bearded dudes in scuffed-up Iron Rangers and Fuck Yeah Menswear was skewering anyone who thought they had “steez,” Castleberry’s site, “Unabashedly Prep,” was like a colorful beacon in the sea of olive and dark blue, always playful, funny and styled incredibly well.

Since moving on from the blog, Castleberry has devoted his time to his own eponymous brand. Think ‘80s Ralph Lauren, but with a playful, cinematic twist on things. You can go to his site to plot what made-to-measure corduroy or moleskin suit you’re going to buy, but you get wrapped up in the story. His shoots are influenced more by Wes Anderson or Whit Stillman films than they are big fashion houses. Again, he’s trying to tell the story, but there’s a lot of thought that goes into that tale.  “We do these name plates that are called Antihero Desk Plates. Those really embodied the ethos and the characters: Unruly Hair, Black Sheep, Troubled Youth, Former Child Prodigy. Those are the characters we’re trying to embrace. And say, ‘Hey man, if you’re an outsider, this could be your club.’”

You can use any bathroom in any hotel in New York if you’re in a suit.

His latest move is into the world of footwear. Specifically, English-made loafers, brogues and slippers. Castleberry went to Northamptonshire, England, to create the perfect handcrafted shoes, which he’s been selling through a Kickstarter. And, of course, there’s a story behind the production, “None of those shoes are being constructed by one person. This is 220 operations. This type of shoe will never be able to be made by a machine. Because there’s so much human judgment that has to go into the way that they’re sewn, and just a high level of craftsmanship. I love that.”

Whether it was part of the plan or not, the Kickstarter campaign demonstrates exactly what Castleberry is so good at: crafting a larger narrative. It’s another example of that sort of outsider or misfit mentality that’s at the heart of what the Texas-born Castleberry is trying to accomplish. He’s doing scrappy with style. He’s building something, and harnessing the power of Instagram to get his work out there. But there’s also an undeniable passion and sense that he’s really enjoying everything he does. From the ongoing tale he tells through an ensemble cast of models to the quotes from artists, authors and other famous creators (Alexander Calder, William Morris) that he posts to his Instagram stories, “so much of this is all coming from a very personal place,” he says.

You can’t have personality if you don’t get personal. That’s something that’s often lost when posting a video or photo can act as a stand-in for genuine, face-to-face connection. Everything feels too rehearsed, too polished. Castleberry resides in between all of that. He builds a world with his brand, but it isn’t pure fantasy. That world is not exclusive, but you have to “get it” to want to be a part of it. He wears his influences on his sleeve, but it’s all with a sly wink and a smile. It’s fun. It’s a story you can’t but help but want to dress yourself up in. F.E. Castleberry makes you feel like you can escape the drudgery of these modern times by putting on a suit with a puffer vest over it or a camel coat over a track suit and indulging in some good old-fashioned mischief. It’s relatable, but only if you want it to be.

“We’re all flawed,” he says as he takes a sip of tea. “We’re celebrating that in a funny, whimsical way.”