Yes, you can watch people plunk it in the drink on 17 all day long if you want
Jamie Squire/Getty
By Evan Bleier @itishowitis 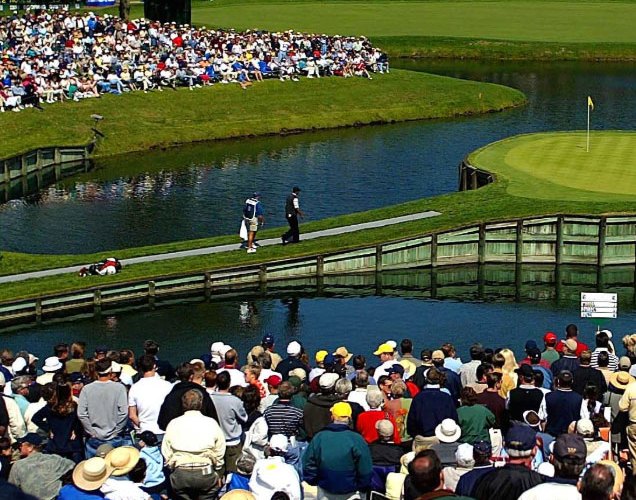 But thanks to a new platform that will give PGA Tour fans the unprecedented ability to watch every single shot of the tournament, the world will also be watching when the groupings of Brian Hartman-Rory Sabbatini-Sepp Straka and Russell Henley-J.J. Spaun-Denny McCarthy tee off to start the tournament on Thursday morning.

Using more than 100 cameras being managed by 28 on-site operators at TPC Sawgrass and 35 switcher operators located in London, the PGA’s Every Shot Live platform will live-stream every shot by every player over four rounds at the Players Championship.

Based on how things played out last year, the PGA Tour anticipates the new platform will showcase more than 32,000 shots over 72 holes from the event’s 144-player starting field, making for nearly 750 hours of live coverage in all. Available to subscribers via NBC Sports Gold, the platform will let fans select the group they want to follow and then watch their progress in real time via a dedicated stream.

This is the first time every shot by every player — from their first-tee drive to their final putt on 18 — will be broadcast at a full-field tournament, and Scott Gutterman, the PGA Tour’s vice president of digital operations, couldn’t be happier about it.

“Everything here is fan first and we’re really trying to accomplish what our fans really would like to see,” Gutterman tells InsideHook. “We also believe every player should have the opportunity to have his route streamed or televised. Over the last two or three years, the technology and remote production and the ability to get more video off of a larger property kind of all came together and that really drove our thinking in this. Along with the rest of the media industry, the Tour has been working pretty diligently to continue to personalize content across multiple platforms and across multiple demands. This is exactly that.”

By giving fans the chance to see players they wouldn’t otherwise have an opportunity to see, Every Shot Live should help broaden the Tour’s appeal in the U.S. as well as internationally.

“This year, our partner, Golf TV, is going to be able to take the specific streams of international players and produce them for different regions in the language that’s best,” Gutterman says. “For example, they’ll take the Udekki Matsuyama stream to Japan and let our partners in Japan produce it. They’re going to do the same for Francisco Molinari in Italy and the same for Viktor Hovland in Norway.”

Golf is often viewed as excessively traditionalist, but initiatives like Every Shot Live show how serious the PGA Tour is about being an innovator in terms of how fans consume professional sports.

“This is all about the growing opportunity to deliver different types of content to different types of fans across a variety of devices,” Gutterman says. “Fans want to be able to consume the content they want, when they want it, wherever they are. I’ve been with the Tour for 15 years. When I got here, the only thing we were dealing with was a website. Now, you can watch live-streaming video all day long of your favorite player or you can watch a 3D model of it while you’re sitting on the subway or you can listen to the Tour on Sirius XM radio on the app. We’re continuing to diversify the way you can experience our events and get to know our players.”

Though the PGA Tour doesn’t anticipate live-streaming every single shot at any future tournaments this year, it’s certainly possible doing it will eventually become the norm, not the exception. And one also sees similar applications in a number of other sports, from live-streaming every match at a tennis tournament to allowing basketball fans to control which cameras they see or which commentary crew they listen to.

“It’s definitely a big experiment that we’re going to evaluate after this week,” Gutterman says. “We will plan to do something similar again next year and to improve upon what we did this year. We definitely believe that five years out from now, depending on how technology comes together and how things scale, that eventually every PGA Tour event will have every shot live. This is the first step in that direction. This is an experiment for us, but it’s one we believe will result in the future of what the PGA Tour will be, which is presenting every single shot through all four rounds.”

A Definitive Guide to the 13 Most Haunted Hotels in the US
We Tasted and Ranked 21 of the Best Pumpkin Beers
The Best New Whiskeys to Drink This October
What It Takes to Convincingly Play a Navy SEAL on Television
The Best Bars in Sitcom History
He’s Probably the Best Athlete Alive. Does Anyone Care?