Patriots Haters Should Blame the AFC East, Not Brady and Belichick 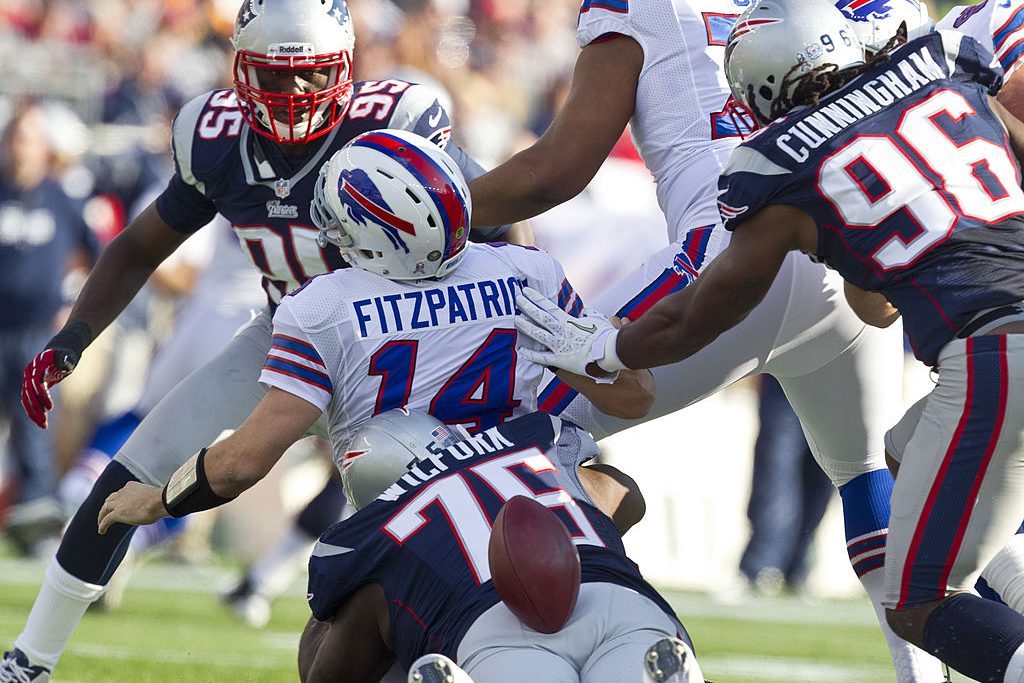 In sports, sometimes it’s better to be lucky than good.

Fortunately for the New England Patriots, they’re both.

Since Bill Belichick took over as head coach in New England in 2000 and Tom Brady assumed the starting quarterback role the following year, the Patriots have had an advantage over nearly every other team in the NFL for almost 20 years.

In the 18 seasons Brady has been Belichick’s starter the Patriots have 220 wins compared to just 68 losses in the regular season racked up 30 victories compared to 10 defeats in the postseason. (Brady missed 20 of those regular-season games due to injury and the Deflategate suspension).

As those numbers illustrate, the Patriots have been dominant with Belichick on the sideline and Brady under center. But, nowhere has that dominance been more complete than in the division in which the best coach and quarterback of a generation (and possibly all-time) have been fortunate enough to play six games each season.

Since 2001, the Patriots boast a 86-24 regular-season record overall against the Miami Dolphins, New York Jets and Buffalo Bills in the AFC East and are 81-21 with Brady in the starting lineup. The Patriots have had a winning season in every one of those years and only missed the playoffs once — when they went 11-5. The last time they lost a regular-season game at home against an AFC East opponent was when George W. Bush was president.

The Top 10 Controversies of the Patriots Dynasty, Ranked

And it hasn’t just been Tom Brady who has beat up on the AFC East.

After Brady got hurt during the first game of the 2008 season and was forced to miss the year with a torn ACL, the Patriots turned to backup quarterback Matt Cassel. In his first start since high school, Cassel led the Pats to a win in Week 2 against the Jets and New England ended up going 4-2 against the AFC East sans Brady.

Even though he was a backup, Cassel — who made the Pro Bowl two years later as a member of the Kansas City Chiefs and was still in the NFL last season as a backup for the Lions — was just as good, if not better, than the starting quarterbacks the Dolphins (Chad Pennington), Bills (Trent Edwards and J. P. Losman) and Jets (a broken-down Brett Favre) were rolling out at the time.

Sadly, two of those guys (Pennington and Favre) are probably in the conversation for the best quarterback to play in the AFC East not named Tom Brady since 2001.

For proof, look at the complete list of Brady’s competition at QB since ’10.

Who’s the best out of that list? Surely Vick and Favre both were well past their primes while playing in New York. Pennington (career record of 44-37) and Bledsoe (98-95) and, ugh, Fitzpatrick (50-75) are probably the best bets.

Obviously, having Brady at quarterback is only half the battle as New England has clearly had the edge at head coach in the AFC East for almost two decades.

Again, just look at the coaches who’ve opposed Belichick on the sideline.

Not exactly a murderer’s row of names outside of Saban and, when you consider he went under .500 in the NFL compared to his 232-63-1 record as a college coach, he wasn’t really any great shakes either. Had Saban opted to sign quarterback Drew Brees, who was recovering from a shoulder injury, in 2006 when he had the chance, perhaps his record as a pro coach would’ve been different and the Patriots would have had some competition in the division. But Saban went with Daunte Culpepper, who was recovering from a knee injury. instead and the rest is history.

Looking at all that as a whole — the poor coaches, the dreadful quarterbacks, the butt-fumbles — it doesn’t seem like a great stretch to say that, as great as the Patriots have been against the rest of the league since 2001 (134-44), a huge part of their success has to be attributed to how bad the AFC East has been.

That likely isn’t going to change this year as, after going through every individual game on each team’s schedule and ranking them based on difficulty, CBS Sports concluded the Patriots have the easiest schedule in the NFL this season.

“Based on our formula, the team with the easiest road to Super Bowl LIV is the New England Patriots, which probably won’t come as a surprise to anyone, because the Patriots seem to have the easiest road every year,” writes CBS’ John Breech. “Although it seems like a vast NFL conspiracy to keep the Patriots on top, the fact of the matter is that we really just need to blame the Jets, Bills and Dolphins for not being competitive at all over the past 20 years.”

That lack of competitiveness within the AFC East has gifted the Patriots 10 straight division titles, an occurrence that has given them home-field advantage in the playoffs which they’ve managed to convert into eight straight appearances in the AFC championship game and three straight Super Bowl trips.

That could all change this season, but two decades worth of history in the AFC Least suggests it won’t.