Ian O'Connor, the author of "Belichick," takes RealClearLife behind the walls of Fort Foxborough.

Head Coach Bill Belichick looks on as Tom Brady #12 of the New England Patriots walks by during the AFC Championship Game against the Jacksonville Jaguars at Gillette Stadium on January 21, 2018 in Foxborough, Massachusetts. (Photo by Adam Glanzman/Getty Images)
By Evan Bleier / October 15, 2018 5:00 am

Bill Belichick has a cold.

Or at least he almost certainly had one over the course of three years ESPN senior writer Ian O’Connor was conducting interviews and doing research for his new book about the curmudgeonly coach of the Patriots.

In typical Belichick-ian fashion, New England’s football coach declined to participate in the creation of Belichick: The Making of the Greatest Football Coach of All Time, so there was never a way for O’Connor to confirm if Belichick ever got the sniffles during the writing of the book. But great writers never let a little thing like their principal subject refusing to talk get in the way of capturing the essence of a man: just ask Gay Talese.

In fact, there were plenty of things O’Connor was able to confirm about the most famous coach in American pro sports even though Belichick asked a number of friends and associates not to cooperate in the project.

Despite the obstacles Belichick put in his way, O’Connor was able to put more than 30 years of experience (and the connections gained therein) to good use. He interviewed more than 350 people in order to paint a portrait of Belichick as a human being, not just a coach. 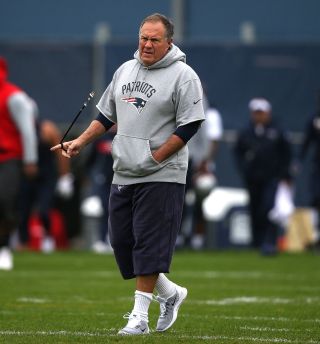 The portrait he paints not always a pretty one, but it’s fair—and it’s filled with plenty of intriguing details about the inner workings of one of the most secretive franchises in sports.

In the book, O’Connor lays out the case that there are only three times when New England Patriots owner has imposed his will on Belichick when it came to personnel decisions.

The first of these moments was when Kraft insisted on signing quarterback Drew Bledsoe to a then-record, 10-year, $103 million contract prior to the 2001 season. The second was in 2007 when Kraft insisted that longtime Patriot and fan favorite Troy Brown be kept on the roster in 2007 even though he had lost more than a step.

And the third was when Kraft stepped in when Belichick was possibly  toying with the idea of replacing Tom Brady with his much-touted backup Jimmy Garoppolo in the not-so-distant future.

“I did not find that Kraft said the words ‘You have to trade Jimmy G.’ Now it’s possible he did, but I don’t think so,” O’Connor told RealClearLife. “I do think he told Belichick and made it clear that Brady was going nowhere, that he was not going to be traded and that he was going to retire a Patriot, be it at age 45, 46, whatever. I think coming away from that, Belichick felt like he had no choice other than to trade Jimmy Garoppolo.”

And trade Garoppolo he did, to the San Francisco 49ers for a second-round pick last October. Many felt the return for a player of Garoppolo’s caliber wasn’t nearly enough and that his 5-0 finish as a starter last season only lent more fuel to that fire. The scrutiny of the deal only worsened this offseason after Brady didn’t show up to the optional portion of training camp while the 31 other starting quarterbacks in the NFL did.

Worn down and upset with Belichick for benching Malcolm Butler in the Super Bowl as well as Belichick’s treatment of his personal fitness guru Alex Guerrero, Brady wasn’t sure he wanted to play for his longtime coach any longer. 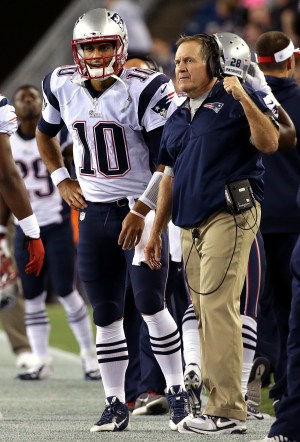 “I think not showing up [to this year’s spring OTAs] was Brady’s way of sending his message loudly and clearly,” O’Connor told RCL. “He had strong feelings about not playing for Belichick anymore. He was trapped. He said publicly he was going to play into his late 40s and compelled the franchise to trade his successor. After that, you can’t walk away or you become a villain. Despite how adored he is by the fans, they might have turned on him and I don’t think he wanted to go through that. And that’s why he reported to the mandatory portion of workouts.”

Considering Belichick appeared ready to be rid of the star quarterback (he “was definitely next to go,” according to O’Connor), still being in New England ranks as one of Brady’s best accomplishments.

“Brady beat the system. He’s the first Patriot to do it. Go back to Lawyer Milloy—there’s a history of stars being pushed or nudged out a year early rather than a year late,” O’Connor said. “Brady was next. He was on deck. But he played at such a high level. That performance was not in the Belichick software. By playing the way he did, he forced them to trade his successor. It’s one of his greatest achievements, right up there with the five rings. He beat the Belichick machine. He beat the system. …and that’s why Garoppolo is in San Francisco.”

And, considering Garoppolo is out for the year with a torn ACL and the Patriots are right back in contention in the AFC, that’s probably a good thing for Belichick.

“Brady was the league MVP. You can’t trade the MVP who’s won five and nearly won a sixth Super Bowl,” O’Connor said. “We’re not sure Garoppolo is going to be a franchise quarterback. He projects to be, but now he’s been hurt twice. He couldn’t make it through two games when he filled in for Brady during DeflateGate. One of the greatest talents Tom Brady has is he shows up every Sunday. The value of that is so significant and profound. When you stand next to Brady in the locker room, it seems like he’s 6’6″ even though he’s listed at 6’4″. If you stand next to Garoppolo, it feels like he’s 6′ 1″ even though he’s listed as an inch taller than that. Brady just seems bigger and he’s there every Sunday, every year. I absolutely think they made the right decision in keeping Brady over Garoppolo.”

And that decision might be correct not just in the short-term, but in the long-term as well, as it potentially sets Brady up for another Super Bowl run with his longtime coach, as well as one with his successor on the sidelines. 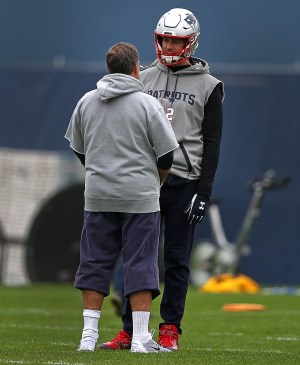 “At this point, they needed to survive this fracture, this flare-up, and they barely did it. Now, they’re going to be able to function together for however long that’s going to be, at least another year or two,” O’Connor said. “They could win another one together. They both have years left. Bill is a young 66 with a lot of energy and can probably coach another four or five years. Brady can play until his mid-40s. It’ll be interesting to see who’s the last man standing or if they decide to go out together. I do think they’ll win one more together and the narrative around that will be ‘A lot of you said we were done or we were broken and we climbed that mountain one more time.’ I think that’ll be a hell of a story, and I hope I’m there to write it.”

And, while O’Connor acknowledges Belichick and Brady “could ride off into the sunset together” he thinks there’s another plausible scenario for New England’s future.

“They win ring number six together and then they both convince [offensive coorinator] Josh McDaniels to stay and he takes over as head coach. Belichick elevates to be president of football operations and lets McDaniels and Brady finish out the last years of Brady’s career together,” O’Connor said. “I think McDaniels deserves to be a head coach and to be the successor there. I wouldn’t want to do it, and I think there are a lot of coaches in the NFL that would want no part of replacing Belichick. But by staying, he’s made it clear he’s willing to be that guy and I give him credit. With Brady at the end of his career, you’ve got to find and develop a new quarterback. Good luck with that.”

The cover of “Belichick: The Making of the Greatest Football Coach of All Time” by Ian O’Connor.

However, if they do win one more, there is another scenario Belichick might consider besides retirement.

“There’s only one other job on the planet that he’d even remotely consider and that’d be going to the New York Giants,” O’Connor said. “They told him at the start of his coaching career they didn’t believe in him and he couldn’t be a head coach. They never saw him leading that franchise. It’s probably more of a fantasy scenario for Giants fans than it is realistic for Belichick though. But, if you had to leave open a remote possibility, I think there’s a one or two percent chance he would go work for that franchise before he retires. It’s the only one.”

And, in spite of what happens with Brady, O’Connor expects Belichick to hang around.

“It’s going to be a close race, but it’s physically harder to play than it is to coach,” he said. “Even though Bill is a lot older than Tom, I could see him coaching for a long time. If I had to put $100 on one them outlasting the other, I’d put the $100 on Belichick. The next ring for Belichick breaks a tie with Vince Lombardi. It’s not something he would ever admit for public consumption, but I think it’s significant to him. ”

For a copy of the book or more information about it, visit Houghton Mifflin Harcourt’s website.