Had the Dolphins signed Drew Brees, Tom Brady may have had a longtime rival in the AFC East.

ATLANTA, GA - SEPTEMBER 23: Drew Brees #9 of the New Orleans Saints throws a pass during the second quarter against the Atlanta Falcons at Mercedes-Benz Stadium on September 23, 2018 in Atlanta, Georgia. (Photo by Daniel Shirey/Getty Images)
Getty Images
By Evan Bleier @itishowitis

If he throws for a mere 201 yards on Sunday, Drew Brees will overtake Brett Favre (71,838) and Peyton Manning (71,940) as the most prolific passer in terms of total yardage in NFL history. And when he does makes history, Brees will be wearing a New Orleans Saints uniform.

But things could’ve turned out very differently. Had the Miami Dolphins chosen to sign the free agent Brees following the 2005 season, the now 39-year-old quarterback might be wearing aqua and coral when he breaks the NFL mark instead of gold and black.

In an ESPN piece about how an alternate career path for Brees could have affected the rest of the league, the Worldwide Leader notes Miami nearly signed the pint-sized QB as a free agent prior to the 2006 season, but team doctors nixed the deal because they thought Brees had only a 25 percent chance of continuing his career thanks to a shoulder injury he sustained in the final game of 2005. 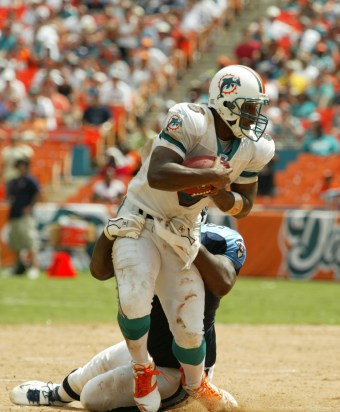 Prior to the 2006 season, Miami traded for QB Daunte Culpepper, who went on to play a mere four games for the Dolphins, while Drew Brees has had a Hall-of-Fame career. (Photo by Ronald C. Modra/Sports Imagery/Getty Images)
Getty Images

Instead, the Dolphins traded for Daunte Culpepper and Brees went on to sign with the Saints.

The ripple effects from this decision, not just for both teams, but for the AFC East in general, have been huge and long-lasting.

In addition to playing at an All-Pro level for much of his time in New Orleans, Brees has also been incredibly durable, starting all but two games for the Saints since he came to the Bayou State from San Diego. (Luke McCown and Mark Brunell started the others.)

Over the same period, the Dolphins quarterback situation has been, to put it bluntly, a dumpster fire.

Since Miami brought in Culpepper and he started all of four games for the the team in 2006, the list of quarterbacks who have started at least one game for the Dolphins reads like a list of NFL trivia has-beens and never-was-es: Joey Harrington, Trent Green, Cleo Lemon, John Beck, Tyler Thigpen, Chad Pennington, Chad Henne, Jay Cutler, Matt Moore, and Ryan Tannehill.

Of those quarterbacks, only one has a career winning percentage with Miami: Pennington who posted a .600 win mark thanks to a 12-8 record. While not overly impressive, Pennington’s body of work looks positively Brady-like compared to what his peers Cutler (.429), Henne (.419), and Green (.000) accomplished. 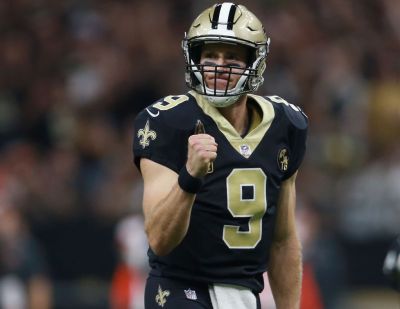 QB Drew Brees has had a prolific career since being signed by the New Orleans Saints after the 2005 season, and only needs 201 more passing yards to break the NFL all-time record. (Photo by Sean Gardner/Getty Images)
Getty Images

In addition to helping the Saints march to wins for more than a decade, Miami’s failure to sign Brees also paved the way for their division rival, the New England Patriots, to continue to dominate the AFC East with an iron fist.

Consider: Since Miami decided Brees was damaged goods, the Patriots have compiled a regular-season record of 151-41 (.786) and gone to five Super Bowls, winning two.

Against Miami specifically, the Pats have gone 18-7 since 2005, including a 38-7 drubbing of the previously undefeated Dolphins last week at Gillette Stadium in Foxboro.

While there’s no way to know how things would have been different last week or over the prior 12-plus seasons if Brees were under center for Miami instead of the Culpepper-to-Tannehill rotation, it seems hard to deny that the Dolphins passing on Brees was a huge missed opportunity.

Thanks to that fateful decision, Miami has been filling the most important position in sports with an consistent parade of mediocrities, which has only padded the Patriots’ record, giving New England two games a year against an NFL team without an elite NFL quarterback.

Miami had the potential answer to this problem in Brees, but was unable to pull the trigger because of questions about his shoulder. And their loss has been New Orleans’, and New England’s, gain ever since.