A group of hockey enthusiasts is trying to break the ice with North Korea by using their own brand of sports diplomacy à la Dennis Rodman.

Members of the Pyongyang Ice Hockey League face off against North Korea’s national team in the capital each year as part of a friendly exchange of athletic competition. Their goal is to bring down barriers not necessarily between nations, but between people.

At a time when the tensions on the Korean peninsula are high, these amateur hockey players believe in their cause more than ever. “I hope to remind people that underneath the politics lies only people—mothers, daughters, fathers, and sons,” Scott Howe explained to RealClearLife. “When we lose sight of that fact, we bring out the worst in ourselves and become capable of atrocities.”

Howe and Gordon Israel started the Pyongyang Ice Hockey League in 2016 as a way of creating dialogue through sports. The idea first came to Howe when he heard about the DPRK team while traveling in North Korea a few years earlier. The two Canadians put together the team of hockey diplomats by working with the North Korean government, which Howe says were quite willing to help make it happen.

The international group, which included some Americans, played several exhibition matches against the competitive Korean players, including a “Friendship Game” which mixes up the teams. “The DPRK team takes their hockey very seriously, so the ‘Friendship Game’ is a great chance to take the pressure off and just have a little fun with the sport,” Howe said. 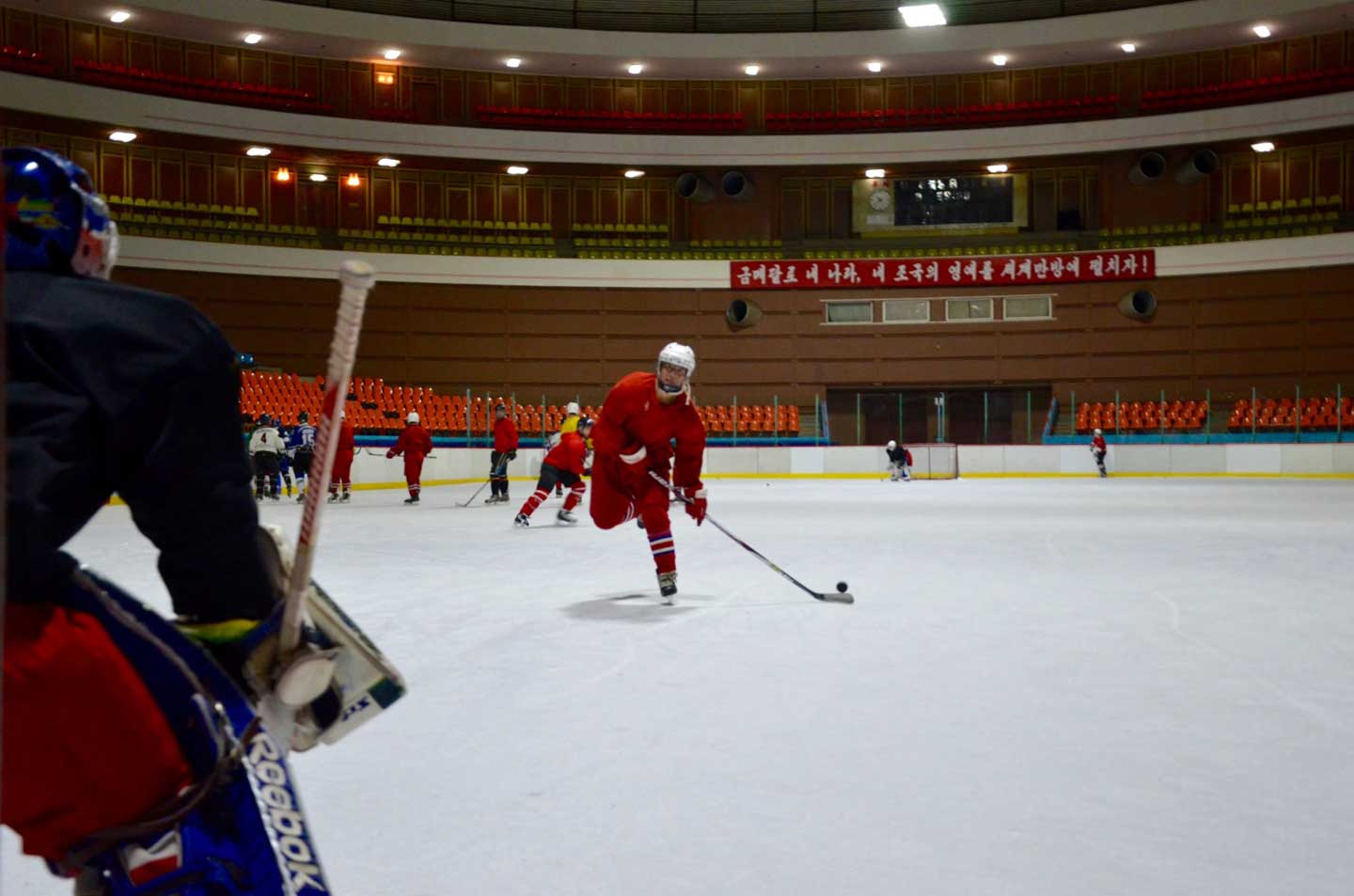 Tourists in North Korea aren’t usually allowed to interact with ordinary citizens, but after the “Friendship Game” the two teams will head back to the locker room to share a few beers and some snacks—like most local rec leagues do in Canada and the U.S. “While we would be ecstatic if one day we were able to spend more time with the Korean players away from the arena, we are quite happy with the level of engagement we are able to achieve as of now,” Howe says.

Aside from the exhibition games, the two teams practice their puck work together during practice sessions that last up to nine hours. Between drills, Howe says they’ll chat and get to know each other a little bit. Sometimes, the Korean players will bring their kids to watch the games or practices, giving them a chance to meet their families.

Bonding over hockey helps both sides forget about history and politics. Howe says both teams get along “very well,” adding that it is “easier to break the ice when you both share a passion for the same sport.”

Their perspective of the isolated nation wasn’t just limited to the Pyongyang Ice Rink. During down time, they manage to get out and see parts of the country. Even though he’s been there several times, Howe is always surprised when he sees Koreans smiling, laughing, or any other show of emotion. He thinks that’s because western media tends to dehumanize the people there.

“It’s not like I expect to show up and see an entire country of robots, but it still catches me off guard every time I see a mother playing with her child, or a soldier walking his son home from school,” Howe said. 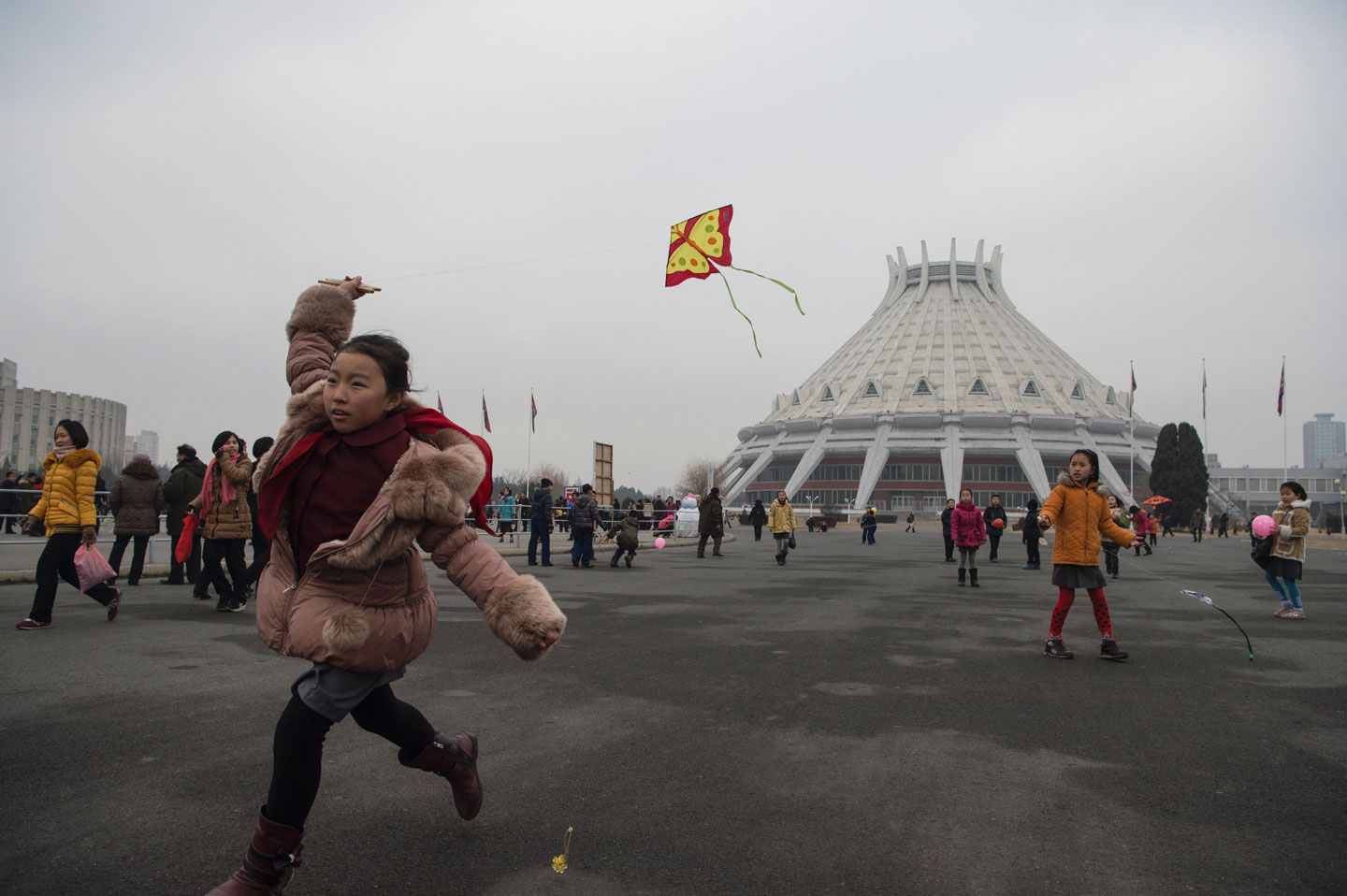 A girl flies a kite in front of the Pyongyang Ice Rink as North Koreans come out to mark the start of 2017 on New Year’s Day in Pyongyang on January 1, 2017. (Kim Won-Jin/AFP/Getty Images)

Though, he and everyone on the trip is aware that the North Korea they get to see is a contrast from the reality. Traveling with a government minder and always under watchful eyes, Howe says it can be frustrating sometimes. He wishes the government would allow foreigners to interact more with ordinary citizens.

Following the success of the first trip in March 2016, the hockey league spun into the Howe International Friendship League (HIFL), a more ambitious project that plans different sporting events in countries around the world. In just this year alone, the Friendship League will play flag football with a local youth group in Costa Rice, soccer with people from a Masai village in one of Kenya’s game reserves, and a lacrosse match in Kingston with the Jamaican national team.

HIFL has held two hockey events in Pyongyang since its augural trip. Howe says there are several trips planned over the next year, including a soccer tournament and a sports workshop for intellectually disabled children. The organization is also trying to host a hockey tournament in Vancouver with kids from the DPRK, but have faced some bureaucratic barriers associated with the stigma of North Korean charities. 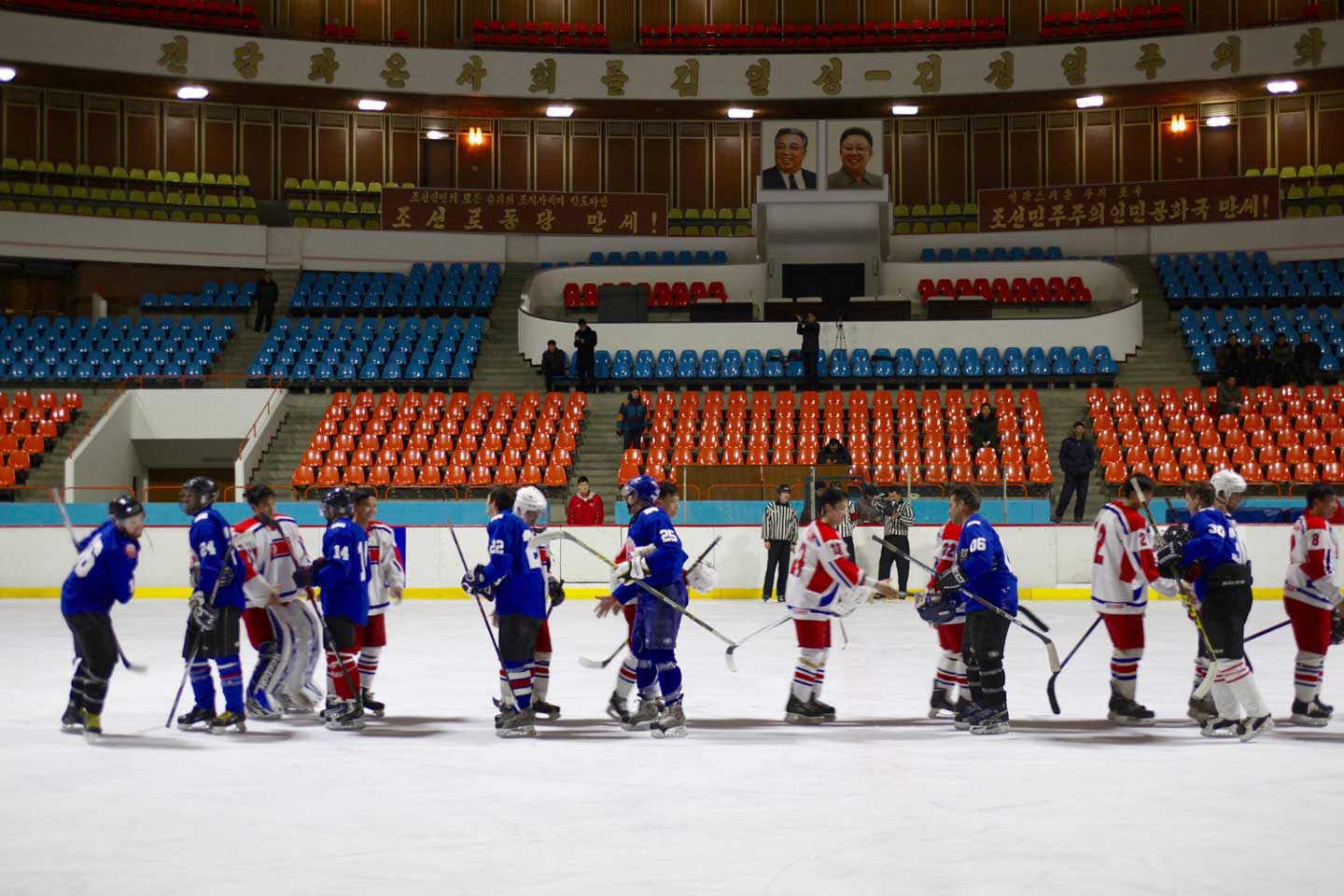 Howe hopes to change the perception Westerners have of North Koreans through the work of HIFL, but his work is cut out for him. The despotic regime’s detention of Westerners and anti-U.S. propaganda certainly don’t help. Despite the numerous travel warnings, Americans join HIFL on trips to Pyongyang. According to the U.S. State Department, at least 16 Americans have been detained in the last ten years. Americans will be restricted from traveling to the country starting in September due to the “due to the serious and mounting risk of arrest and long-term detention.”

Relations between the United States and North Korea have been strained for the last half-century, but have reached a low point in the last two years. The same month the first hockey trip was in Pyongyang, North Korean authorities charged Otto Warmbier, a 21-year-old American student, for allegedly stealing a propaganda poster. After 17 months in prison, Warmbier was released from custody in a coma and died six days later in an Ohio hospital. Howe says this incident was “very troubling.”

Currently, HIFL plans to continue operating in North Korea but will stop if the organization feels its no longer safe to bring foreigners there. Howe says Pyongyang is safer than Vancouver for tourists if they follow the guidelines HIFL provides. Yet, he admits the punishments for Americans who break the rules are far more severe than other foreigners. Howe also highlights the 200,000 tourists that visit each year without any trouble.

When it comes North Korea, HIFL is pretty realistic with its goals, which is mainly to facilitate genuine exchanges and, eventually, to bring the Special Olympics to Pyongyang. Howe doesn’t expect a couple of hockey games will make Kim Jong Un give up his nuclear weapons or anything like that.

“Our goals are much smaller and more pragmatic. We feel that regardless of politics, there are many opportunities to find common ground and improve the human condition and that sports are simply a way to find that common ground,” Howe said. “I think that it can help in some fields, although I am not so naive as to believe that a few sports games will alter the course of history.”